Nvidia, of course, isn't alone in the GPU business. Its competitors, AMD and Intel, also have a vested interest in exploring where this concept of virtual workstations will go, particularly in professional spaces such as CAD. Remember that, though not a supplier of discrete (add-in) GPUs, Intel actually sells more GPUs than AMD and Nvidia combined, as controllers built into its Core and Xeon CPUs. Very few of those CPU-based GPUs, however, are in use in deskside workstations for CAD, and so far, they have not been supported for use in datacenter applications such as VDI.

It's been a different story for AMD. Although the company has not been as aggressive as Nvidia in developing and pushing server-side GPU technology, AMD’s FirePro products do currently support VDI solutions. However, to date FirePro has been serving server-based computing applications like VDI with essentially the same GPUs it offers to the traditional workstation market (that is, without the critical vGPU support in hardware). That situation is now changed, with both AMD and Intel joining Nvidia with custom-designed vGPU support in hardware optimized to support this fast-emerging space.

This September, AMD introduced its own version of hardware vGPU support, branded AMD Multiuser GPU technology. Scaling up to 15 users per GPU, Multiuser GPU technology eliminates a lot of the performance-robbing, latency-inducing software overhead of previous GPU-sharing technologies. And comparable to GRID, Multiuser GPU allows for use of native FirePro drivers for maximum application compatibility and reliability. Critically, AMD is building out its supporting ecosystem as well, announcing support in VDI solutions from both VMware and Citrix. 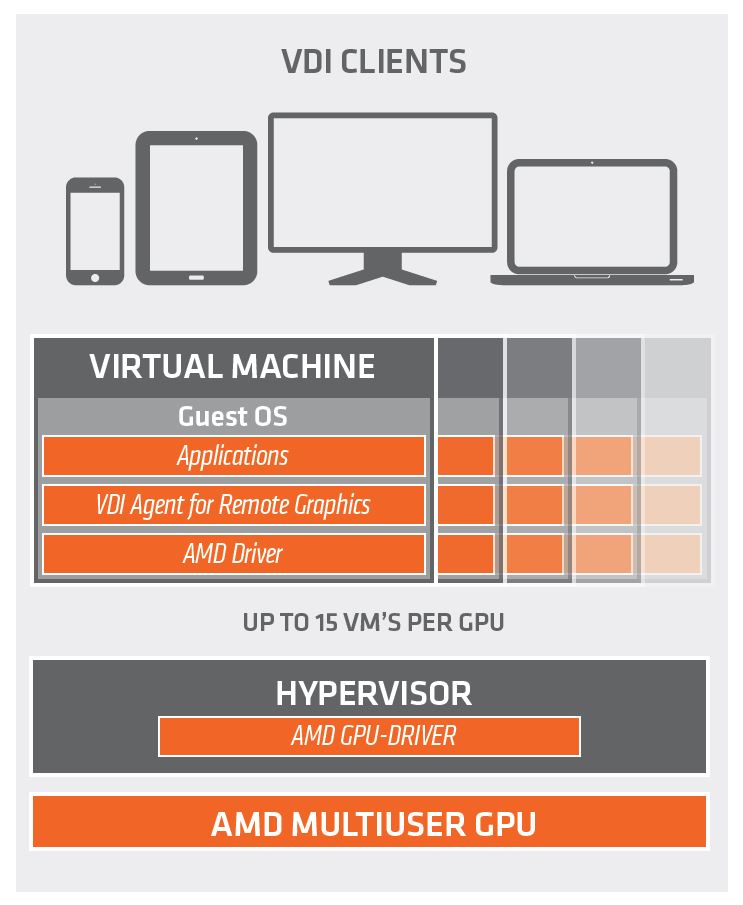 AMD is looking to compete with Nvidia's GRID vGPU technology with its own Multiuser GPU support. Image courtesy of AMD.


The same goes for Intel. In the same month, the processor giant launched its own vGPU support in conjunction with the launch of its newest processor microarchitecture, Skylake. On a feature level, at least, Intel's GVT-g (for Graphics Virtualization Technology) seeks to match GRID vGPU and AMD's Multiuser GPU. In terms of support, Citrix is developing support for GVT-g vGPU, and while there is currently no comparable support announced by VMware, I'd expect to see that down the road.