As is the case every year, many companies are announcing new offerings at SIGGRAPH 2017, which is being held this week in Los Angeles, California. The annual conference focuses on computer graphics and interactive techniques, and its attractions include demonstrations, educational sessions, and an exhibit hall that spans hardware, software, and services.

This year, two hardware products were particularly notable for the mobility and flexibility they promise for CAD professionals and VR users on the move: HP’s Z VR Backpack G1 workstation and external graphics processing unit (eGPU) solutions from NVIDIA.

In a move toward increased mobility and flexibility, NVIDIA announced external GPU (eGPU) systems in which the GPU is mounted in a separate chassis, not housed inside the computer chassis. With this offering, NVIDIA seeks to serve content creators who are looking for ways to combine mobility and computing power; the eGPU enables users to upgrade their lighter, more travel-friendly laptops with NVIDIA GPUs typically found on heavier, more powerful mobile workstations.

NVIDIA TITAN X or Quadro GPUs can be used, providing the power needed for photorealistic rendering, CAD, simulation, VR content creation, and other compute-intensive tasks. “Even on a thin-and-light system, you can have TITAN or Quadro [as external graphics],” said Greg Estes, NVIDIA’s vice-president of developer programs.

“While more computer power than ever is needed for VR, photoreal rendering and AI workflows, mobile systems are getting thinner and lighter, with limited performance and memory,” said Bob Pette, NVIDIA’s vice-president, Professional Visualization, in a company release. “Our eGPUs can now solve this problem, enabling creatives to plug into our most capable GPUs so they can do their best work on the most graphically demanding applications.”

In addition, a new driver for TITAN delivers three times the performance of applications such as Maya, the company reports. 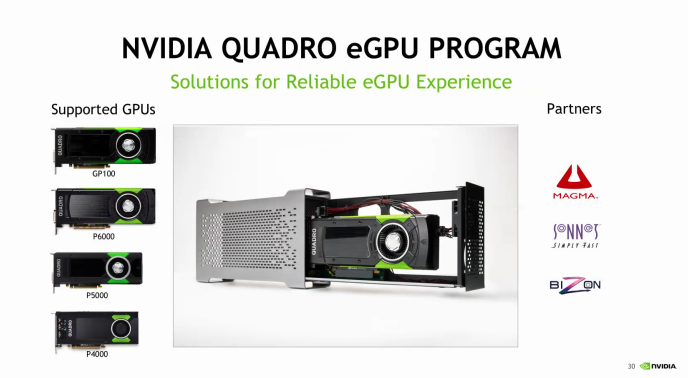 NVIDIA's new eGPU solution comprises a GPU and driver, an external chassis, and a Thunderbolt cable to connect to the computer. Image courtesy of NVIDIA.


Available starting in September, Quadro eGPU solutions will be available through qualified partners. Prices for the GPUs themselves will be the same as existing Quadro and TITAN models; chassis prices range from approximately $300 to $700. Chassis are available from multiple manufacturers, including Asus, HP, PowerColor, and Razer.

VR on the Move in the Real World

According to Josh Peterson, HP’s director of worldwide product management for workstations, HP sees potential for virtual reality (VR) applications far beyond from the current situation, in which three-quarters of VR applications are in gaming. “We see a larger opportunity for VR, which is commercial VR,” said Peterson. “[Companies] are looking for better ways to engage with their customers, and provide their customers with better experiences.” In addition, he said, they’re seeking to cut costs and accelerate time to market by streamlining training and design processes.

Peterson asserted that technology, software, and the customer mindset have all reached a tipping point that makes this the right moment to launch commercial VR solutions. “Our intent is to take the hype out of VR, and unlock the real potential for these commercial customers,” Peterson said. They do have different needs from the consumer gaming market, however. “There’s an IT element that’s absolutely critical for this class of customers,” Peterson noted — meaning that commercial customers require that VR solutions provide the same level of security, reliability, and performance as their existing technology platforms.

Peterson pointed to varied commercial use cases, including:

Untethered, yet unencumbered. Billed as “the world’s most powerful wearable PC for VR,” the 10.25-lb HP Z VR Backpack G1 workstation features a form factor that allows users to walk freely during use, unlike many VR setups in which the user is tethered to a fixed computer. This reportedly increases the immersive quality of the VR experience, and enables users to engage in augmented reality (AR) experiences that require moving through or interacting with their real-world environment — such as a training sequence or repair task in a factory or jobsite. “VR is just the first step toward a world of mixed reality,” Peterson predicted. 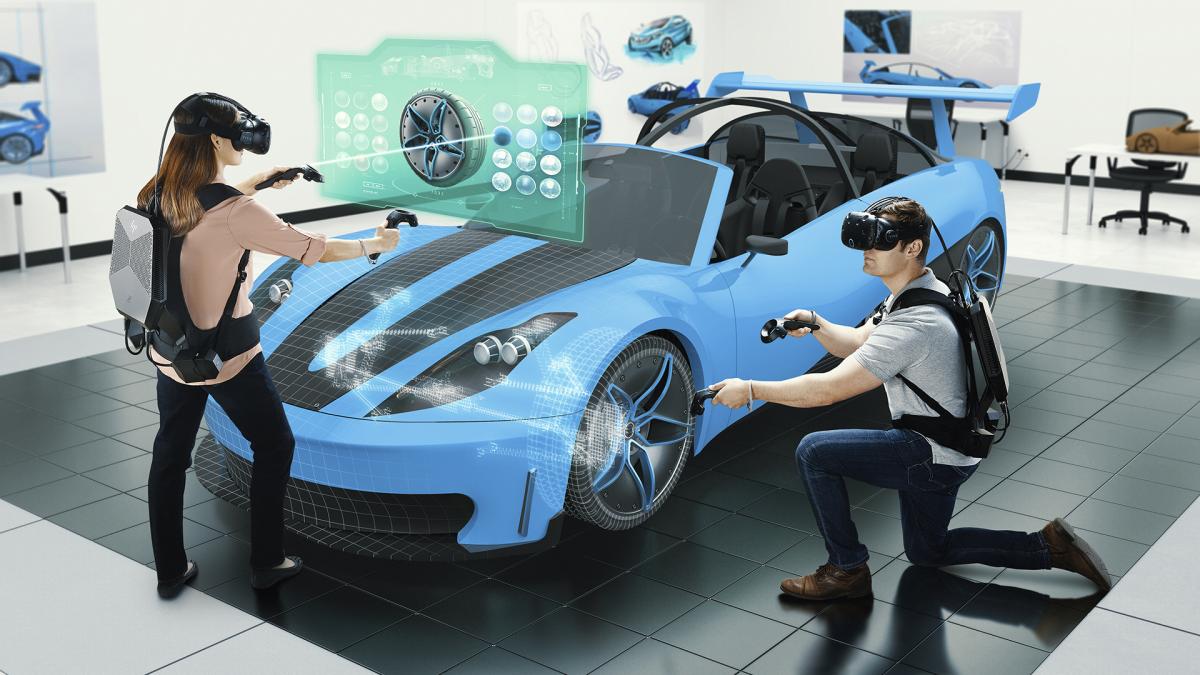 
The workstation component of the HP Z VR clips into a backpack-style harness, and the user’s head-mounted display (HMD) connects to this computer. Hot-swappable batteries allow for mid-experience change-outs; they reportedly last about an hour in rich VR sessions.

The HP Z VR also features an Intel Core i7 vPro processor, including the vPro chipset; and an NVIDIA Quadro P5200 graphics processing unit (GPU) with 16 GB of video memory. This level of computing power ensures the high frame rates and low latency necessary for a convincing VR experience, said Allen Buckner, segment marketing and VR product development manager, HP Workstations. “You can’t have stuttering and skipping,” he said. “There’s absolutely no throttling of the CPU or GPU.”

A docking station, and support for two 4K displays, allow for desktop use when the computer unit is removed from the harness. “[Users are] often moving between VR creation and consumption multiple times during the day,” Buckner observed.

The HP Z VR Backpack is scheduled to become available in September, starting at $3,299. HMDs are sold separately.