As expected, NVIDIA covered a lot of ground at this year's GPU Technology Conference (GTC) in San Jose. As expected, big ticket items highlighting CEO Jensen Huang's keynote included machine learning, autonomous driving, and high-performance computing (with an emphasis on big data analytics). While machine learning will certainly have a big say in the future of CAD computing, for example in generative design (addressed in a recent column), the most relevant of NVIDIA's current high-profile initiatives for CAD remains 3D visualization.

What NVIDIA kickstarts today will impact CAD professionals down the road. The company is aggressively and deliberately throwing down the gauntlet on a future dominated by ray-traced rendering. At his GTC keynote, CEO Jensen Huang made it clear that NVIDIA is committed to pervasive real-time ray-tracing, accelerated and enabled by RTX technology, introduced for the first time in the company's Turing generation GPU products. The impact will have as much to do with the natural and incessant evolutionary march that technology is always on, one that naturally and logically points to the same future: one in which we leave behind what's acceptable in exchange for what's superior.

When Will Ray-Tracing Be a Default 3D Processor?

Followers of NVIDIA probably know it's not the first time the company's positioned ray-tracing front and center at GTC. In fact, the company prominently discussed ray-tracing in its messaging for GTC in 2017 and 2018 as well. Given that this is NVIDIA's third consecutive year talking about real-time ray-tracing at GTC, and given that few yet use ray-traced rendering as a core tool in their visual computing toolset for CAD, a cynic might start to wonder if this initiative is falling short of expectations. Or, that ray-tracing is turning into another over-hyped visual technology that won't meet expectations, akin to virtual reality. (Okay, that was super cynical. VR has its justifiable applications in CAD as well. We'll cover VR in a subsequent column.)

Granted, I may a bit jaded these days, having weathered countless Next Big Things in visual computing over the years, the majority never amounting to much, but I'll argue that ray-tracing won't disappoint. Don't confuse its lack of overnight success with its very likely destiny. For any application in which photorealism is the visual goal, ray-tracing (or any of its similar or derived techniques) is superior to the traditional raster 3D techniques. Period. The latter can approximate the quality of the former, but since ray-tracing more closely tracks the physical properties of light, it will produce images at least as good and usually much better. The reason raster 3D has dominated our visual computing world is not because of its superior quality, but its acceptable quality delivered with far superior performance.

A Huge Ship to Turn

The problem — and why first impressions might have you thinking ray-tracing is a disappointment — is that we're talking about a massive change in technology. The 3D graphics industry is a huge ship that will take a long time to turn, even though the new destination is a compelling one. First and foremost, remember that ray-tracing represents a very different computing algorithm than traditional 3D rasterized graphics. Yes, they both produce 3D computer generated images, but they do so in different ways. Also, once they became more generally programmable, GPUs that were optimized for 3D raster graphics were pretty good at ray-tracing, certainly better than any other processor.

But, being fortuitously capable is not the same as being deliberately optimized, so a ray-trace-;focused GPU must be built. For NVIDIA, that meant the shaping of the Turing generation GPU that supports RTX and drives the RTX-branded GeForce and Quadro products. Turing includes specific and non-trivial hardware in the form of RT Cores (for firing rays) and Tensor Cores (for machine learning but accelerating raytracing performance via intelligent de-noising). NVIDIA seeded the market with three Turing-class Quadros, the RTX 5000, 6000, and 8000, all at price points well beyond mainstream (Roughly $2,500, $6000, and $10,000, respectively). Because of their high price-point, they didn't push RTX into the market and stimulate the technology. That situation changed just recently with the release of the ~$1,000 Quadro RTX 4000, the first somewhat accessible RTX-capable Quadro to start to infiltrate the bulk of the CAD installed base.

Beyond getting the hardware out there, there's the issue of enabling middleware such as 3D engines and APIs that drive not only the bulk of modern 3D games, but other applications as well. All of that infrastructure has to be modified and/or extended along with items such as standardized physically based material definitions to make ray-tracing worthwhile. Finally, the creation and authoring of the content must be optimized for ray-tracing versus traditional raster graphics.

A Ray-Tracing Ecosystem for CAD is Building

At this year's GTC, CEO Jensen Huang made a point to emphasize the progress made in filling out the software ecosystem, with NVIDIA and partners promising RTX-accelerated ray-tracing in the following applications this year:

As you can see, gaming is well represented on this list, with the popular Unity and Unreal Engine. DME (digital media and entertainment) is a priority as well, with Pixar's Renderman, Otoy's Octane, Redshift's Renderer, Foundry's modo, and Daz 3D's Daz Studio. 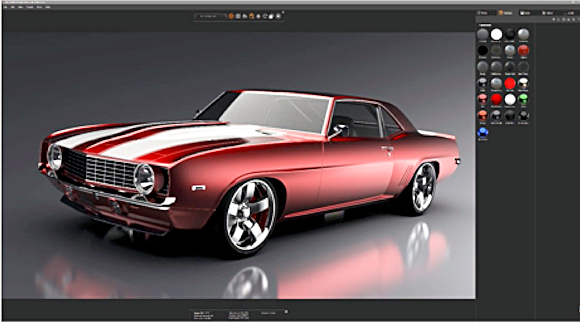 A leading ISV partner in NVIDIA's RTX push into CAD is Dassault Systèmes, which in SolidWorks 2019 has integrated RTX support in its Visualize in-app renderer. At its recent SolidWorks conference, Dassault Systèmes and NVIDIA demonstrated Visualize by rendering four views of a 3D mechanical design in side-by-side windows, one with RTX technology enabled on the just-released Quadro RTX 4000 and the other with it turned off. The window without RTX required 50% more time to complete. In terms of performance, that means an RTX 4000 that leverages newly integrated Turing ray-tracing acceleration can run around 33% faster than without. 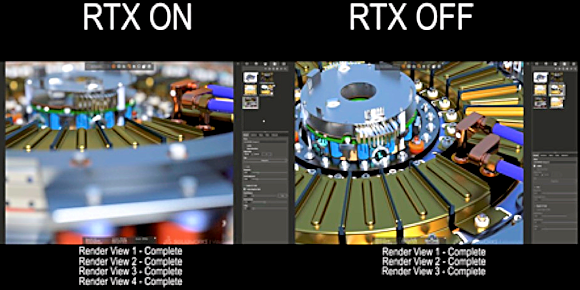 SolidWorks Visualize renderer running on the Quadro RTX 4000, with RTX technology enabled (left) and without (right). An RTX 4000 leveraging newly integrated Turing ray-tracing acceleration could run around 33% faster than without. Image source: NVIDIA.

In its efforts to build a supporting ecosystem for RTX, NVIDIA's gone a step beyond working applications and middleware and is supports workflows. At GTC, CEO Huang introduced the Omniverse, an open platform that fosters real-time collaboration of rich visual content across multiple applications, workflows, and work sites.

Managing 3D projects has become more problematic across the professional spectrum as a result of two predominant trends: data sizes exploding and workforces becoming scattered around the globe. Gone are the days when the entire development staff works under one roof, particularly in manufacturing, architecture, and media and entertainment. Now, contributors from multiple studios and design houses work around the world, with all expected to efficiently contribute to 3D datasets. It's not just a media and entertainment problem, as CAD professionals in architecture and construction are finding projects more fragmented across more contributors, incorporating staff that may be in another time zone or even on the opposite side of the globe.

Managing all these cooks in one global kitchen makes for project challenges, one that Omniverse aims to address. Omniverse supports synchronization between applications and sites via portals that "maintain live connections between industry-standard applications such as Autodesk Maya, Adobe Photoshop, and Epic Games' Unreal Engine." To ensure all applications are speaking the same language over those portals, Omniverse employs Pixar's Universal Scene Description technology to specify modeling, shading, animation, and lighting, while tapping NVIDIA's own MDL (Material Definition Language) as a standard interchange of material parameters. The intended result? Contributors can develop different components of the same overall scene — or in the case of AEC or manufacturing, the same project — with each seeing the same representation on their individual screens, synchronized in real time.

A new offering on the scene, Omniverse's place in professional 3D workflows is anything but secure. However, given that it addresses a very real and intensifying pain point for professionals, plus NVIDIA's impressive list of supporters — including Adobe, Autodesk, Pixar, Digital Domain, and Industrial Light and Magic — its prospects appears bright. For more on Omniverse, check out Huang's Omniverse pitch at GTC here: https://www.youtube.com/watch?time_continue=72&v=rVsp6o9t5nY.

It's been a while since NVIDIA first started talking about GPU-accelerated PBR (physically based rendering) and ray-tracing. While real-time interactive 3D visualization for CAD remains dominated by traditional 3D raster graphics, the long-term prospects for ray-tracing have not changed and it remains the logical path for the industry to travel. Accordingly, NVIDIA continues to develop its ray-tracing strategy. On the contrary, with Turing and RTX, coupled with the company's aggressive push to build a broad supporting ecosystem, NVIDIA is doubling down.

Any substantial transition to pervasive real-time ray-tracing is going to take a lot of bootstrapping: More capable platforms need to get in the hands of users, which then motivates more development of applications and supporting infrastructure, which in turn can spur more capable platforms out to market, and so on. This will take some time, likely several generations of hardware and software.

All logic and reason says it will eventually happen, and the transition must start at some point. NVIDIA decided now was as good a time as any and consciously built Turing with a long-term outlook in mind. With the RTX becoming more accessible economically, applications and middleware beginning to gel, the bootstrapping is underway.