Input Technologies for CAD: What's the Best Mouse for Your Workflow? Part 1

Herrera on Hardware: Although the wired, optical mouse is ubiquitous, there are many other options on the market today, including devices that promise improved comfort and efficiency.


What a relief: After decades of being enslaved to our keyboards and mice, we've finally managed to break the shackles binding us to those primitive devices. We've now all reached the point that we're simply speaking commands, gesturing naturally, and adjusting eye contact to command our computers to quickly, efficiently do everything we want them to do. We can finally toss the mouse and keyboard onto the technology scrapheap with all the text terminals, card readers, and other I/O relics.

Yeah, right ... if only that were true! In reality, the human-computer interface has never approached its promise. Keyboards and mice are still the primary and universal means of input for desktop computers — dominating the “I” in “I/O” — and they will, in all likelihood, remain that way for quite some time. And particularly when it comes to visual computing spaces such as CAD, one could argue the mouse has never been a more critical component of end-user productivity. The more quickly and accurately commands can be made to adjust views and tweak models, the more likely users are to shorten design iterations and close in on a product's final design parameters quickly and precisely.

As discussed in a previous installment of this column, ergonomic design in hardware really does matter — to users and to hardware developers. It's increasingly become one of the most important differentiating factors that vendors use to distinguish their wares from those of their rivals. That’s true for everything from workstations and displays to the tried-and-true mouse.

For the purposes of discussion, let's break down today's spectrum of mouse products into three classes:

The first category is easy to identify. For an example, look to the mouse that came as the baseline accessory with your PC or workstation: a standard, 3-button, optical mouse, with utilitarian form and function. It's unlikely to have much of an ergonomic shape or fit, and it's probably wired. Mice in this category range from free-with-purchase to $10 or so.

Now, most users only ever tap two of those buttons — the left and right — and many would be hard-pressed to remember where the third button is. Conventional design stuffs it underneath the scroll wheel, simply because very few applications make compelling use of it. (Of course, CAD applications represent the exception to that rule, but we'll get to that shortly).

Stepping up from the baseline model are mouse products that support a range of premium features — such as wireless connectivity, alternative controls, and more precise tracking — but still appeal to most any type of user running any type of application. Premium, general-purpose mice typically sell in the $20 to $80 range.

Wireless connectivity. All else being equal, nobody's going to prefer a mouse with a cord versus one without. When working the user interface and manipulating models, a wire that's constantly in the way will waste time and test patience. Unfortunately, all else is not equal, as a wireless mouse has its own downsides. Replacing batteries remain a turn-off, but bear in mind that improvements in power efficiency are making this chore much less frequent — and therefore, less problematic.

A bigger concern is often interference, and not the interference that renders the mouse useless the minute you plug it in. That's disappointing, but it's a clear-cut problem with an easy remedy — you go get the wired version. No, far more frustrating is low-grade or intermittent interference that makes for occasional, unpredictable dead cursors. Compound that with all the radio frequency (RF) signal interference from wireless mice in neighboring cubicles, and it's not a surprise that few large CAD workstation installations will endorse or allow wireless mice.

Do you work alone or in a small company with looser IT rules, and find the appeal outweighs the tradeoffs? Then go for it, but be aware that advanced, CAD-optimized mice (discussed ahead) may not be available in a wireless version.

The trackball. Of course, there’s no rule that a pointing device has to move along the desk to control motion on the screen, and alternative means of control exist, the most common being the trackball. Instead of moving the entire device, the user rotates a ball within it to direct motion, typically with his or her thumb. Some users prefer a trackball because it never needs to be picked up and moved to extend the range of the cursor or pointer. 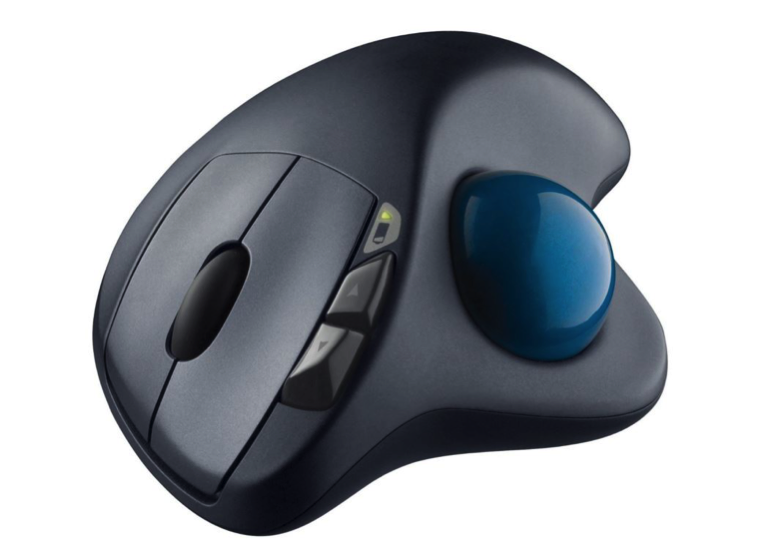 Logitech's M570, one of the most popular trackballs on the market, equipped with laser tracking. Image courtesy of Logitech.

While a product like Logitech's M570 represents the norm in trackball designs, it doesn't represent the only approach. Contour Design takes the basic trackball concept a few steps further, offering several RollerMouse products, all of which are built around a roller bar in place of the more conventional roller ball. Placed in front of the keyboard and integrating a multidude of programmable buttons and two different styles of arm rest, the roller bar spins forward and backward like a ball, but slides left to right. If the bar hits the limit on its physical range, continued pressure drives the cursor further, accommodating high-precision tracking and multiple high-resolution monitors. 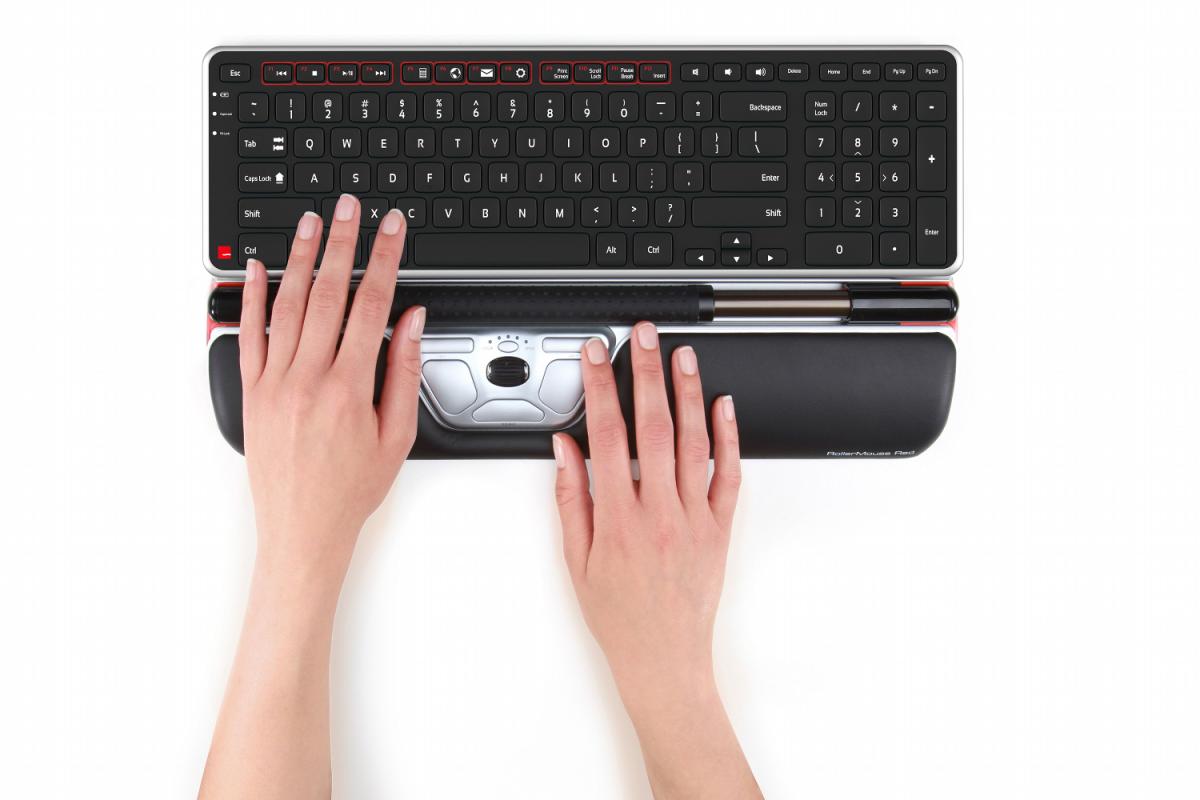 For a different type of stationary mouse experience, Contour Design's RollerMouse Red uses a roller bar instead of a trackball. Image courtesy of Contour Design.

Ultimately, however, it's the static position of the user’s hand, wrist, and arm that makes the trackball especially appealing to one very specific audience: those with repetitive strain injuries (RSIs) such as carpal tunnel syndrome (CTS). Though a Cadalyst poll revealed that the trackball is the device of choice for only about 10% of respondents, for those suffering with an RSI, it likely represents the most popular option. And if the injury or discomfort is severe enough, it may be the only option.

Programmability. Many premium mice offer buttons beyond the standard three, and allow the user to map them to his or her most frequently used commands and controls, potentially shortening design and view times. Benefits of programmability vary depending on personal preferences, how intuitive the particular device is, and typical usage. Programmable buttons are analogous to keyboard shortcuts: some use them constantly, others infrequently, and still others not at all. Many designers can’t live without them, but if you like to keep things simple and streamlined, you may find "premium" programmability at best a waste and at worst a hindrance.

Laser precision. To improve positional accuracy, some mouse designs replace the simple optical tracking with laser tracking. Both technologies illuminate the surface below the device with light, and the difference is in the emitter, not the sensor: The laser mouse uses a laser (of course), while the optical mouse uses an LED. Laser tracking can (and usually does) provide superior accuracy, as reflected in the ability to resolve more dots per inch (DPI). Where an optical mouse may resolve 500 DPI, a laser mouse can manage 6,000 DPI or more. A laser emitter also tolerates rough or highly reflective materials better than an LED does.

That's great, because more precision is always better, right? Not quite, because precision is a double-edged sword. Yes, it provides a valuable benefit, in CAD more than most any other application, by helping users click exactly where they want on finely detailed models. However, like display resolution, increasing tracking resolution eventually becomes overkill, exceeding the ability of the human senses (or coordination) to make use of it. And worse, ultra-fine resolution can simply be too sensitive for many common general Windows-type tasks that work better with a "softer" touch, such as office productivity applications. To help alleviate that issue, higher-precision laser mice typically provide settings that allow the user to adjust the sensitivity.

Editor's note: Click here to read Part 2 of this series.