New turnkey system can simultaneously support as many as 16 users of Autodesk Design Suites, SolidWorks, and Adobe Creative Suite.


NVIDIA has unveiled what it calls the industry’s first visual computing appliance, enabling small and medium-sized businesses with limited IT infrastructures to deliver workstation-class performance over local-area networks to any Windows, Linux, or Mac client. The new NVIDIA GRID Visual Computing Appliance (VCA) is driven by graphics processing units (GPUs, commonly called graphics cards) and is designed to optimize the user experience with 3D CAD and rendering performed in Autodesk Design Suite products and SolidWorks as well as Adobe Creative Suite.

A plug-and-play appliance, NVIDIA GRID VCA requires no advanced IT experience to set up. “Just install your apps and go,” explained Ankit Patel, product manager, VCA. It comes in 8-GPU and 16-GPU configurations to support a maximum of 8 or 16 users, respectively. Businesses can easily expand and contract GRID support in response to changing workflows, Patel said.

NVIDIA GRID VCA will be available in the United States in May from authorized resellers.

Software resides on the NVIDIA GRID appliance, which performs all processing and sends graphics output over the network to be displayed on the client computer. With the click of an icon on the client device, a user can create a virtual machine, called a workspace, and experience the same performance he or she would expect from a high-powered, expensive desktop PC. Because GRID is an appliance, every user sees the same generic workspace, Patel explained. Client systems can be any configuration – except mobile platforms, which will be supported later, Patel said.

A user accesses the system and is assigned an unused slot on the GRID, which can consist of one or more GPUs. For example, the 16-GPU GRID could support 16 users allocated one GPU each or four users allocated four GPUs each, depending on their software needs. Workspaces can be added, deleted, or reallocated among users as needed. The GRID appliance itself is configured with Windows 7 and NVIVIA Quadro drivers. SolidWorks, Autodesk Design Suites, and Adobe Creative Suite have been tested and are officially supported by NVIDIA to run on GRID — however, many other applications, including less graphics-intensive products such as Microsoft Office products, will run on the platform. 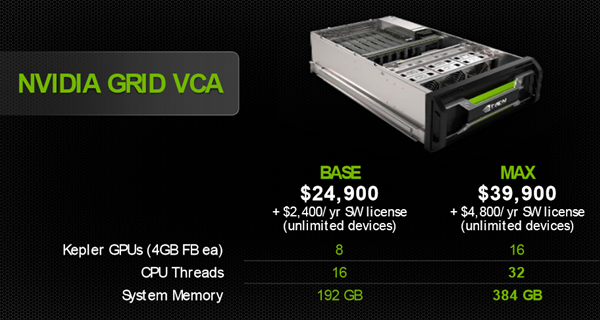 NVIDIA GRID–based networks eliminate the need for users to be equipped with their own desktop or mobile workstations (and their own GPUs). How does this affect traditional NVIDIA business built on GPU sales? “It shouldn’t have much impact, Patel said. “It’s a level of technology that supports a niche – businesses that probably couldn’t afford to equip users with their own [high-powered] workstations. It’s an affordable option.”