Speed always tops the list of what's new in CAD workstations, as Intel and AMD continually produce ever-faster processors. CAD/CAM, engineering software, and certain graphics applications are among the reasons that faster processors are still important to many of us in our day-to-day work. Time is still money, and the faster you can complete a given drawing or visualization, the more time-and money-you save. Users of, say, Microsoft Word aren't clamoring for more speed. My wetware (brain) is usually the bottleneck here, or how fast I can type, not how fast letters appear on a screen.

We're also seeing a wealth of speedy graphics cards that can keep up with the blazing speeds of today's microprocessors. Many of the new systems tested here also have two or more USB v2.0 ports to handle faster peripherals such as scanners, CD-R/W or DVD drives, or any of the wealth of new devices making their way into the workplace.

With increased CPU speeds comes heat, and the need for enhanced case ventilation to keep everything cool enough to function correctly. Unfortunately, more ventilation usually means more noise. None of the systems tested for this roundup was what you'd call quiet, though some fared better than others. When I can hear a system running from a room or two away, it is, in my opinion, too loud. Though noise-dampening cases are available, as are quieter fans, at each new CPU speed level, today's systems tend to tax the limits of tolerable noise. This is likely to be an ongoing problem unless some realistic (and economical) breakthrough occurs in cooling high-performance workstations.

System cases tend to be smaller and offer greater connectivity options than in past roundups. These trends are likely to continue as devices such as floppy drives become relatively obsolete legacy devices in the near-term future.

We can't help but wonder when a system roundup will once again include AMD microprocessors. Intel appears to now have the upper hand in performance. But AMD plans to deliver new processors in the near future, so that might change once again.

A WORD ON TESTING
Our testing procedure for this roundup has evolved somewhat from the last time we benchmarked workstations here in Cadalyst (June 2002). The C2001 test remains the same-and continues to give AutoCAD 2002 a thorough workout. For the SPEC ViewPerfect test, however, we moved to v7.0 and are now using the ProE01 suite of tests. This updated suite still gives a reliable test of video performance, particularly the OpenGL characteristics of a graphics card, and adds a few new models and tests to the benchmark series. We also used this test suite for our recent graphics card roundup (October 2002) and expect to continue using it for the near future.

For the graphics card review, we also adopted a new 3ds max benchmark-3dsmax 4.2.6. 3ds max 5 was not quite out of beta testing when we needed to run our tests. 3ds max 5 is now released (see box on p. 22), so we ran the MAX4Bench suite of tests using the new release. If you're interested in benchmarking your current system with 3ds max 5, you can find the benchmark tests on 3ds max 5's second CD-ROM. These new tests, along with 3ds max 5, give systems a substantial workout and address many new video card features, such as pixel shading.

Most likely as a result of using the larger cache found in the current crop of Pentium 4 systems, both the ViewPerf and the MAX4Bench tests ran a bit faster than expected in comparison with AutoCAD running the C2001 benchmark. This is primarily a result of how AutoCAD and 3ds max 5 each work-AutoCAD is more dependent upon subsequent iterations and procedures.

As we often say, so much depends on the drivers. We generally don't test AutoCAD with high-performance drivers. We've found that some such drivers signal that-for example-a screen has been erased, when in actuality it has not, making it impossible to test apples against apples, as the saying goes. By using the default accelerated AutoCAD driver, we ensure that all graphics cards are working the same way.

Video drivers that have settings for 3ds max 4.x or 5.x generally post lower scores for those versions of max than do the default drivers. When accelerated drivers are available, we do test 3ds max with them, although we base system scores on tests with the default driver. Because 3ds max 5 supports advanced features found in the current crop of graphic cards, the default Windows drivers offer even greater performance. Default video drivers for certain graphics cards literally increase performance about 25% using nothing more than the standard Windows drivers. Investigate and choose your drivers carefully.

YOUR NEXT SYSTEM?
If you need the fastest, hottest system, there's sure to be much to please in the selection reviewed here. The workstation market will see big changes in the coming months. We'll soon see the first round of systems based on the Intel Pentium 4 3.06GHz processors and new chipsets. Hyperthreading and AGP 8X are but two of the new features that will make their appearance then. Both are likely to change our performance expectations from these top-end systems. Initial test results may not do the technology justice, however. Hyperthreading benefits may depend just as much on your software applications as they do on the processor, for example.

Also new is the Tablet PC, which made its official debut in early November. Will your firm use Tablet PCs as adjuncts to CAD workstations? We'll check them out early in 2003. 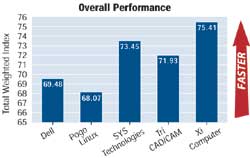 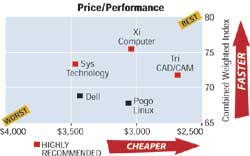