Editor's note: This review is part of a Cadalyst Labs Report. Read "Color Wide-Format Printers for CAD" to learn how this model compares to the others included in the product roundup.

Canon is a well-known name in the photo and video markets, as well as the home-use printer markets. The Canon imagePROGRAF iPF785 MFP M40 brings that pedigree to task, delivering a very impressive wide-format plot system. For our review, Canon sent the iPF785 MFP M40, which incorporates a 36"-wide, single-roll printer; scanner; stand; computer; and touch-screen monitor in one integrated system. 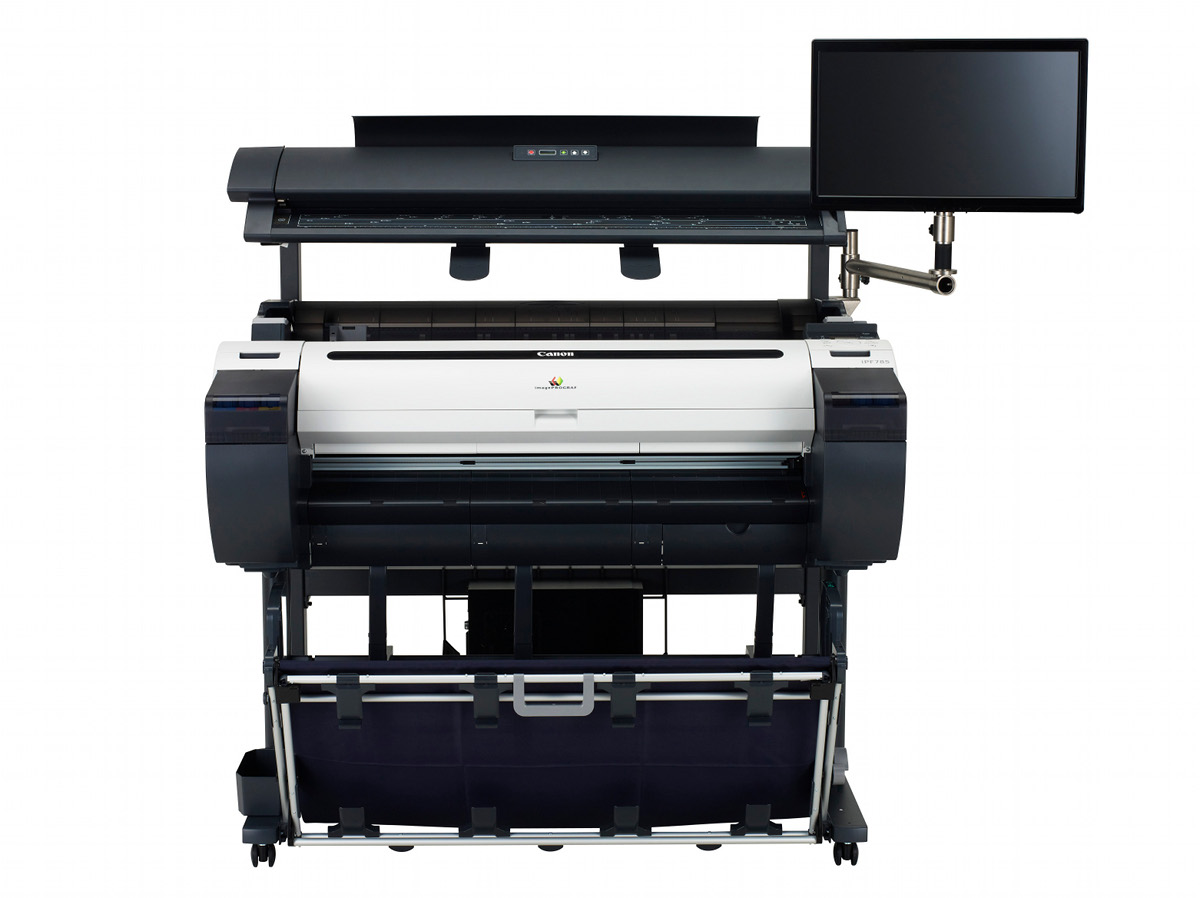 Installation. Installing the iPF785 MFP M40 is straightforward. Once downloaded, the interface is standard and required a minimal number of clicks to quickly find the printer on the network and connect.

Connectivity. I connected the iPF785 to my office network for testing and review. This process was as simple as plugging in a CAT 5 Ethernet cable and plugging the other end into my wall port. The included Gigabit Ethernet port (1000 Base-T) and a USB 2.0 port (for direct connection) are conveniently located and easy to reach.

In addition to the traditional workstation-based operation, the iPF785 is also cloud-enabled, meaning that you will be able to plot directly from your Apple iPad through the imagePROGRAF Print Utility app. Cadalyst Labs didn't test this function due to technology conflicts. It will be nice when it works with other products.

Media support. Canon offers a wide variety of media for use with its iPF785 MFP M40 printer. It can handle rolls of paper ranging from 8" to an impressive 36" wide. With the slide-in loading system, paper rolls are first placed on top of the printer, then slid into place along guide rails.

Beyond the normal bond and coated paper, it also accepts vellum, film, photo satin paper, adhesive matte vinyl, and even durable matte polypropylene banner options. (That wide range of options could certainly reduce the number of jobs sent out to the local reprographics shop.) In testing, the bond, heavyweight coated, and photographic papers all presented bright, clear images with no smearing.

Canon lists the speed and resolution specifications for the iPF785 printer as:

In production, I found that the plot rate seemed faster than the company's economy timing, and was quite reasonable in other modes. Lines were clear and dark, making the economy mode perfectly acceptable for plot checks and even production plots.

When plotting graphics and photos, the machine really showed off its Canon heritage. Graphic prints were sharp and photographic images were bold and clean, with deep colors. Photographs sent to the iPF785 came out with exceptional quality.

The iPF785 printer utilizes a standard separation of ink cartridges and printhead. The system uses five individual ink cartridges located in two distinct bays on either side of the paper output. The cyan, magenta, yellow, and matte black inks flow to a single printhead. Individual cartridges are available in 130-ml and 300-ml options.

The M40 scanner is a fantastic addition capable of producing ultra high-quality image scans. Besides being a very capable and easy-to-use scanner that features optics manufactured by Canon, the system has other perks. The M40 scanning system comprises the scanner, a full-sized touch-enabled monitor, MFP stand, and a full workstation. This setup provides the largest and most detailed interface of the printers reviewed. The touch screen is responsive and makes it easy to access deeper settings and options. All of this runs directly from the Windows 7 or 8.1 workstation mounted to the back of the printer. The workstation is powered by a Pentium G3240 processor and has 2 GB of RAM. The included 500 GB hard drive will be able to handle even the largest plot or scan jobs. All of this combines for the more capable set of capabilities and controls in our roundup.

The M40 scanner has a 1,200 DPI optical resolution with a maximum 9,600 DPI (achieved by magnifying optical input with software) and generates JPG and PDF files. The Canon optics and system far outclass most scanners in the design space. The scanner was fast and easy to use, with no problems loading prints.

The Canon iPF785 MFP M40 system is as impressive in its capabilities as it is in its physical presence. It offers nice touches everywhere, from the loading and locking mechanism for ink cartridges to the extendable paper catcher. The star of this combo unit is the large, touch-enabled interface screen included with the scanner.

Without the M40 system, however, the interface of the iPF785 printer is very clunky and offers an antiquated LCD push-button system that pales in comparison to the touch interface. Also, the M40's included workstation could stand to be beefed up. While there were no delays in scan testing, the full power of Windows does take a toll on what could be a blazing-fast arrangement. The M40 scan system would be greatly improved with the addition of an Intel i3- or i5-based processor and more RAM.

Canon warrants the product to be free from defects in workmanship and materials under normal use and service for a period of one year after delivery to the original purchaser. Buyers have the option of purchasing as much as two additional years of service.

Operating at the high end for speed and quality, the Canon iPF785 MFP M40 is capable of fantastic prints and has a unique user interface that brings a great deal to the party. The large, touch-capable screen provides a large control surface that is easy to view and operate. The included software offers a wide range of settings and capabilities, including scan-to-PDF. Plus, the inclusion of Canon optics in the scanner produces outstanding imagery.