Two additions to the SureColor T-Series family emphasize compact footprints, low cost, and local availability for users who demand the immediate gratification of printing on the desktop.


Epson announced two additions to its SureColor T-Series lineup this week: the low-range SureColor T3170 24" desktop printer and the mid-range SureColor T5170 36" floor-standing printer. Like many other wide-format printers, these upcoming releases target CAD users in the AEC community, as well as geographic information systems (GIS) professionals; there have been major changes, however, in what those users expect from a printer, according to Epson.

Once upon a time, wide-format printers were massive machines, in terms of both size and cost. Individual users would route their print jobs to a centralized print room, shared by everyone in an office or work group — or perhaps send them outside the company, to a provider specializing in reprographics. But the modern technological environment, in which so many people take for granted their on-demand access to aesthetically pleasing, conveniently sized, personally controlled devices, has reshaped expectations of printing. Hardware and data communication capabilities have evolved as well, enabling the creation of devices that support new expectations of affordable, compact, locally controlled machines — that are stylishly designed, to boot. Why wait your turn to use the shared printer down the hall, if you can get afford to get prints anytime from a sleek unit that fits on your desktop? “It doesn’t make sense for them to have to wait now,” said Matt Kochanowski, product manager, professional imaging, Epson America. “Everything should be instant access … instant gratification.”

That’s the value proposition behind the SureColor T3170, aimed at individual users and priced at $995 (without the optional stand), and the SureColor T5170, intended for work groups and priced at $2,395 (both will be available starting in September). Those numbers are substantially lower than the existing SureColor T-Series models, which are more in the $3,000–7,000 range. While Epson still sees a place for those higher-end models, which feature more sophisticated capabilities such as scanning modules and automatic switching between two different rolls of media, the company thinks there is “a large market out there of customers who just need a basic printer,” said Kochanowski. “We’re seeing a shift: Architects and engineers are wanting to stay lower-end [and have] their own dedicated workflow. … They’re pushing more toward the entry-level space,” he observed. 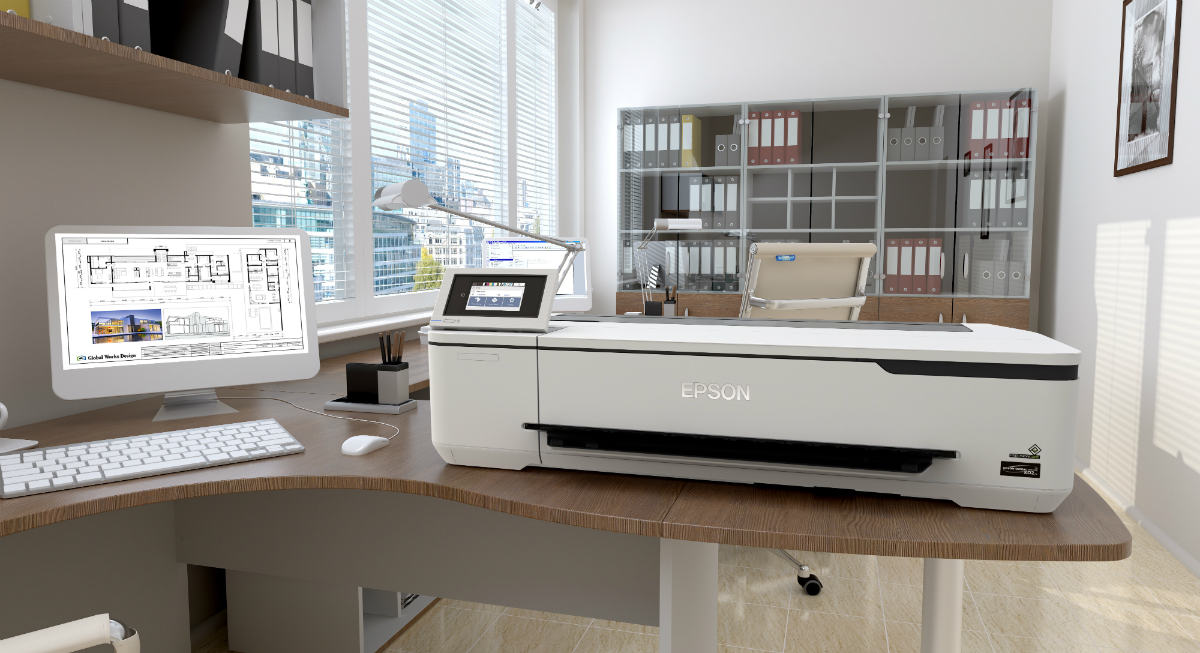 The Epson SureColor T3170 wide-format printer, which can be placed on the desktop or on an optional stand, expands the T-Series into the sub-$1,000 range. Image courtesy of Epson.

“HP has been the leader in this [lower-end] market for quite a while,” Kochanowski said, referring to HP's DesignJet T120 model. “However, we feel like HP hasn’t innovated in this space,” leaving an opportunity for Epson to provide new models to better address the market, he observed.

Two of the market needs Epson has focused on are style and maximizing limited space in the office. According to Kochanowski, the designers and architects that Epson has been talking with have “high standards for equipment” and are seeking a printer “worthy of being in their environment” — something that’s not merely functional, but also supports their firm’s image, especially when customers visit the workplace. “We wanted to make a printer that fit that sort of aesthetic,” he said.

And whether they care about aesthetics or not, everyone cares about having enough room to work. The desktop-friendly SureColor T3170 is “about 15–20% smaller than the comparable HP [model] … it’s the smallest you can get in the 24" class,” said Kochanowski. In addition, the color touchscreen interface — a first for Epson wide-format models — folds down when not in use, leaving a flat top surface to temporarily store papers. “[The printer is] taking up space, but it’s also giving some space back,” he noted.

Size is also a factor in portability, which may matter little to most office workers but can be a common concern on construction job sites, where users need to set up, break down, and relocate temporary offices frequently. The “small, compact design” of the new T-Series models makes them “very mobile, very transportable,” Kochanowski said — by wide-format printer standards, anyway.

The new T-Series models feature Epson’s new PrecisionCore MicroTFP printhead technology, incorporating larger chips than those used in the past, yielding faster print speeds (34 seconds or less for A1/D-size prints) and resolutions up to 2400 dpi, Kochanowski said. Nozzle clogs — “one of the biggest pain points” in printing, as he put it — and other condition problems can be automatically detected by the company’s Nozzle Verification Technology as ink is passing through the nozzles.

The T3170 and T5170 are the first T-Series printers to feature integrated wireless and Wi-Fi Direct connectivity, which enables devices to establish a Wi-Fi connection between themselves, without requiring a wireless router. “We finally incorporated Wi-Fi into one of our technical printers,” enthused Kochanowski. The ability to print directly from a tablet or smartphone is a tremendous benefit in environments where “mobile [devices are] being used more and more,” he explained.