Check explained that the first generation of the SureColor T-Series was designed from the ground up for small and medium-sized architectural and design firms; the new generation, in contrast, focuses on refinements rather than an all-new design, and expands the number of models from three to five. “We’ve added and expanded a lot of new options and configurations,” said Check, including double-roll models and an optional scanner.

All but the smallest model can accommodate an optional multifunction printer (MFP) module ($4,500) that enables users to scan and copy in full color, without the need for a computer, and does not enlarge the printer’s footprint. MFP-equipped machines can also e-mail each other, so users can scan documents in one location, then print them in another.

The MFP module incorporates a 36" full-color scanner with 600 dpi optical resolution, a stand attachment, and a 320-GB internal print server. The scanner uses Epson's REALOID image processing engine to produce color D-size copies in less than 40 seconds, and to provide color scan speeds of as much as 6.0 inches per second. It can accommodate materials as thick as 1.3 mm. 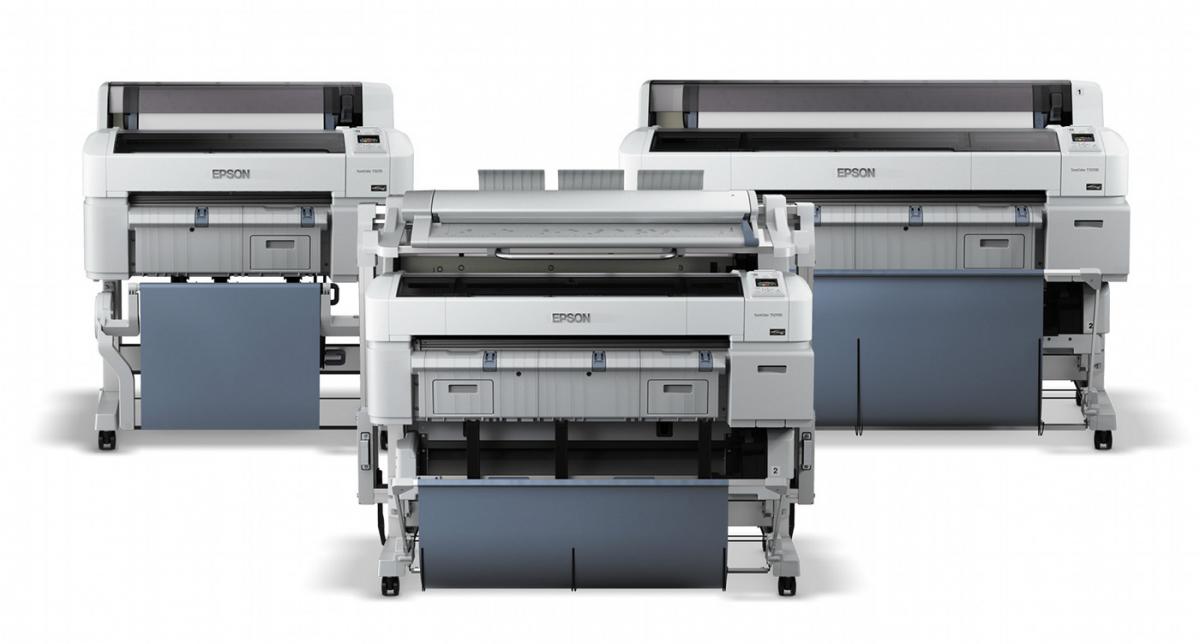 The second-generation Epson SureColor T-Series comprises five models, three of which are pictured here: the T3270, T5270D, and T7270D (left to right). Image courtesy of Epson; click to enlarge.


Customers can buy a printer first, noted Check, then add the MFP module at a later date: “It’s an upgradeable feature, [so the capabilities] can really grow with the business.”

The single-roll options include:

The two double-roll members of the family are:

The double-roll models can be used for two different paper types or widths, which saves time for customers who need to switch between the two, Check explained. Alternatively, they can hold two rolls of the same media, and automatically switch to the second when the first is exhausted. Both rolls are auto-loading once the user feeds in the first half-inch of paper, said Check; “there’s really very little the end user needs to do.”

All five models use Epson UltraChrome XD pigment ink — the same as that used in the first generation, which simplifies supply management for customers who own multiple models, said Check. This ink creates prints that are smudge-, fade-, and water-resistant, he said. “[In conditions including] snow, rain, sleet, hail, California sun … you’re going to have durable output.” According to Epson, “the SureColor T-Series printers are designed to be used exclusively with these specially formulated inks, and not with other brands of cartridges or inks.”

The printers use cyan, magenta, yellow, photo black, and matte black inks, which are available in 110-mL, 350-mL, and 700-mL cartridges. According to Check, although it’s a four-color system, the printhead produces such small droplets of ink that it can create transitions and tonal gradients as smooth as those typically found in six-color printers. “This is the most precise instrument to put dots on paper,” he said.

The second generation of the Epson SureColor T-Series will begin shipping in September 2014.