Océ Sees Green in the Future of Color Printing


With 3D-based buzzwords such as BIM, IPD, VDC, and sustainable design being bandied about these days, it's easy to forget that most CAD users in the AEC field remain firmly planted in 2D. But the reality is just that, and nowhere is this more true than at the construction end of the traditional AEC workflow.

Wide-format imaging hardware developer Océ is setting its sights squarely on this 2D user base. The company told a gathering of industry press and analysts in May that it believes one of its prime opportunities, at least for the foreseeable future, lies in converting the traditionally monochrome 2D crowd to color printing.

Moving to 3D modeling (where most design work is done in color) from 2D drawing (traditionally a monochrome environment) necessitates a move to color printing. You'd be smart to think this is great news for developers of wide-format color printers, scanners, and copiers — but you'd be wrong. That's because the move to 3D, and particularly BIM (building information modeling), brings about more digital data transfer and fewer paper hand-offs than do 2D design and construction. Factor in the reality that the move to 3D and BIM is not happening overnight, and a developer of color printing technology has a real challenge on its hands.

This is precisely where Océ found itself. Purchased this year by Canon and operating as an independent company, Océ was on solid ground but wondering where to find the opportunity amidst these market realities. So the company set about to develop a new business strategy.

Sal Sheikh, marketing vice-president of the Océ Wide Format Printing Systems division, noted that the company remains committed to developing black-and-white printing technology. However, he added, "You'll see that in both technical documentation and display graphics, our efforts are heavily invested in color products."

That commitment is clear, but the path to success is not. Users perceive color printing to be expensive and difficult to use, so part of Océ's challenge will be "to facilitate behavior change" by educating potential customers about the true benefits that come with color printing, Sheikh said.

Color floor plans can highlight similar items such as doors, windows, or plumbing fixtures in thematic colors, making these items quicker and easier to identify and count than they are on traditional monochrome printouts. This seemingly simple change can lead to significant benefits, such as fewer change orders resulting from mistakes and oversights, and reduced operating costs resulting from RFIs and change order management.

BIM is generally accepted as a way to significantly reduce construction mistakes and change orders; however, it's also known that implementing BIM can entail a difficult transition for users and a significant amount of time and expense for their companies. Océ believes there is a happy medium here, one where contractors and project owners can reap many of the benefits of BIM through less-expensive technologies. The answer, Océ says, is color construction documents. 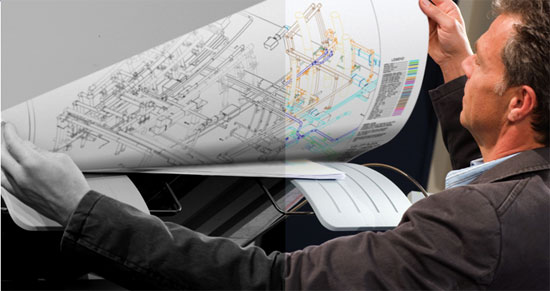 Show Me the ROI
No data existed to demonstrate how color printing benefits the building project owner or contractor, so with the help of industry consultants, Océ set about to develop its own. To demonstrate the value of effective color construction documentation, Océ developed an ROI formula that factors in the cost of color printing, which is twice as much as black-and-white printing. Using a $22 million construction project as the example, the Océ formula shows that the reduced change orders and operating costs (RFIs and change order management) achieved through color printing result in project savings of nearly $230,000.

In the long run, the company reports, every incremental dollar that a project owner spends on color printing generates $4.17 in project savings, not to mention more timely project completion, earlier productive use of the completed facility, and reduced legal expenses to negotiate change order disputes.

The ROI is lower for contractors, but the revenue implications are significant, including:

Director of marketing Bob Honn clarified, "Our model is for the traditional design–bid–build approach, which is the majority of projects today." The company aims to reach and educate the contractors on non-BIM projects regarding how color can benefit them. It has launched a blog, Color for Construction, to discuss the benefits of color printing for contractors.

New Kid on the Block

At the press event, Océ also demonstrated its new ColorWave 300 printer/copier/scanner, called the industry's first single-footprint system for wide-format color and black-and-white imaging. Designed for architectural, engineering, construction, and commercial printing firms that have limited floor space, the system produces as many as 100 D-size drawings per hour "without sacrificing quality." 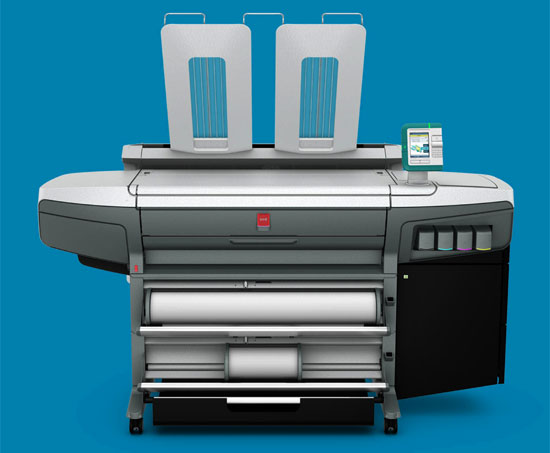 
The device allows users to manage all functions from one control panel and requires only one IP address. The controller manages the most popular file formats, including HPGL/2, PDF, DWF, and JPEG, without sacrificing speed, the company reports, and users can print and scan documents via a USB flash drive. Based on thermal inkjet technology, the system reportedly does not produce any ozone, dust, or odors.