Editor's Note: This article was originally published in the Winter 2012 issue of Cadalyst magazine.

Last year, Cadalyst Labs reviewed BOXX Technologies' GoBOXX 1640, which proved to be the fastest mobile computer we had reviewed to date. This time around we evaluated the 3DBOXX 3970 XTREME desktop workstation. Of course, we couldn't help but ask ourselves, "Will this full-sized machine follow the example set by its mobile cousin and prove to be a top performer?"

System features. No one would describe the 3DBOXX 3970 XTREME as a traditional workstation. To start with, the case looks like a one-off unit straight from the floor of an industrial machine shop. We mean this as a compliment — the rugged look affords a nice contrast to the thin metal and plastic cases we often come across. The case, which measures 67/8" x 175/8" x 193/8", is built to last and sports a thick, foam-backed, wire-mesh screen in the front to hide the cooling system. Yes, the 3970 XTREME includes an Asetek sealed-loop liquid cooling system, complete with a radiator and tiny hoses. It is coupled to an Intel Core i7 quad-core CPU, which is overclocked to a whopping 4.5 GHz. As for noise, the cooling system is audible, but it's certainly not a matter of concern — and we are definitely sensitive to the issue of noise.

Looking inside the case, we promptly noticed the spacious interior. This unit is packed with options and has loads of room to spare. Then we noticed something was missing: the hard drive. Honestly, we were perplexed until we removed the opposing side panel and uncovered the Western Digital 1.0-TB, 7,200-rpm SATA drive neatly sandwiched vertically between the back side of the motherboard and the external panel. This narrow space also houses an Intel 311 SSD, a 2.5" 20-GB solid-state drive that intelligently caches the most frequently accessed files for optimum read performance. Slots are available to add four more 3.5" drives as needed. The unit supports RAID 0 and 1 configurations with additional drives.

The 3970 XTREME's motherboard has four dual-channel DIMM sockets; two are filled with a pair of 8-GB DDR3-2133 DIMMs, providing 16 GB of system memory. Five expansioncard slots are available: two PCIe 2.0 x 16 slots (x16), one PCIe 2.0 x 16 slot (x4), and two PCIe 2.0 x 1 slots. The sixth slot is filled with an NVIDIA Quadro 4000 graphics card (with 2 GB of GDDR5 RAM) that includes one dual-link DVI-I port and two DisplayPort connections, letting you run two simultaneous displays at a maximum resolution of 2,560 x 1,600 with 32-bit color. A Seasonic 620-W energy-efficient power supply (80 Plus Bronze certified) should meet the demands of all but the most exotic configurations.

When it comes to connectivity, the 3970 XTREME is an overachiever. It includes eight USB 2.0 ports (two in the front, six in the rear) and four USB 3.0 ports (two front, two rear). Also in the rear, you will find one eSATA port, one Gigabit Ethernet port, and one optical S/PDIF audio out connector. The front of the machine, in addition to the USB ports, features one 1394a port and a set of 7.1 HD audio jacks. The unit also supports Bluetooth 2.1 + EDR (enhanced data rate).

Rounding out the feature set of the 3970 XTREME are a 20X DVD+/-RW writer with dual-layer support, an integrated sound card, a standard keyboard, and a Logitech M500 laser corded mouse. The unit operates on Microsoft Windows 7 Professional Edition 64-bit. 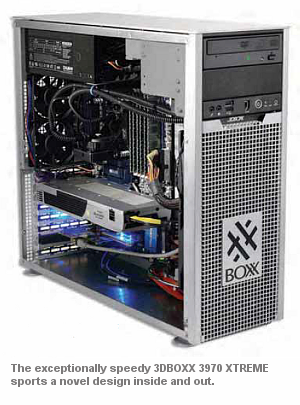 Test results. We measured the 3970 XTREME's performance with our usual suite of three tests: Cadalyst c2011 v5.3b benchmark with AutoCAD 2011 and its default driver; Cadalyst c2011 with AutoCAD 2011 and NVIDIA's enhanced driver; and SPECviewperf 11. (Although Cadalyst c2012 is now available, we opted to run c2011 to enable direct comparisons with the previous model, and we continue to run AutoCAD 2011 while we await NVIDIA's update of its enhanced driver for AutoCAD 2012.) Per our standards, we set the screen resolution to 1,280 x 1,024 and the color depth to 32-bit, enabled hardware acceleration for AutoCAD, and turned off vertical sync for the graphics card.

As mentioned, we were expecting terrific results from our benchmark tests this time around based on the great performance of the BOXX mobile workstation from last year — and the 3970 XTREME did not disappoint. The full set of c2011 benchmark scores with the NVIDIA enhanced driver were as follows: total index of 1,447; 3D graphics index of 4,766; 2D graphics index of 437; disk index of 260; and CPU index of 326. Each of these scores represents best-ever marks for the standard workstation category, with the total index score beating its closest competitor by 19%. For the record, one mobile workstation costing $1,000 more than the 3970 XTREME claimed a higher 3D index and subsequently higher total index. That mobile system had a distinct advantage, however, thanks to its NVIDIA Quadro 5100M graphics card.

The 3970 XTREME blew away the competition on the c2011 benchmark with the default AutoCAD driver, which relies more on the computer's raw processing power than the specialized 3D muscle of the NVIDIA card. It beat the closest competitor's total index number by a full 37%. The complete list of its test scores were as follows: total index of 566; 3D graphics index of 1,285; 2D graphics index of 353; disk index of 279; and CPU index of 346.

Because the 3970 XTREME uses an overclocked CPU, we ran our benchmark in a continuous loop for 16 hours to test endurance. This is much more than simply leaving the system turned on — it essentially runs the CPU and graphics card at full throttle the entire time. Thanks to its enhanced cooling system, the workstation's internal temperature remained steady. Of course, this is no guarantee that the overclocking will not affect the life of the CPU in the long run.

BOXX designed the 3970 XTREME workstation to wring every ounce of performance out of its souped-up CPU and hard drive, which paid off handsomely with CPU and hard drive test results that are unmatched by any system ever reviewed in Cadalyst Labs.

BOXX backs the 3970 XTREME with a three-year limited warranty; shipping and labor are covered during the first year only. It provides technical support via phone and e-mail on weekdays from 7 a.m. to 6 p.m. CT. Its return merchandise authorization procedure states that it will issue an RMA number for failed equipment.

The workstation as configured for this review came in at $4,047. If your work requires top performance, however, you should have no trouble justifying the cost of a powerhouse like the 3DBOXX 3970 XTREME. Highly Recommended.