Don’t let the small package fool you -- this miniature marvel packs in everything you need for 2D and entry-level 3D work.


You're a CAD user, so you likely know the benefits of a professional workstation over a standard PC. What you probably didn't know until now is that a desktop workstation exists that is so small that you can hold it in one hand. Introduced in November 2016, the HP Z2 Mini is the world's first mini workstation.

Don't dismiss the HP Z2 Mini as too small to support demanding CAD applications. It was designed, engineered, configured, and exhaustively tested to ensure it runs 2D and entry-level 3D CAD smoothly and reliably — the same treatment given a full-size workstation. Following are seven reasons you should look seriously at this mini marvel. 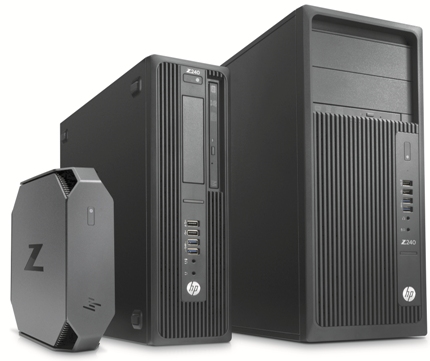 It's a real, professional workstation
Don't let its size fool you: The HP Z2 Mini is a full-performance machine, packed with options that ensure reliability for critical CAD applications.

Full CAD performance. Twice as powerful as any commercial mini PC on the market, according to HP, the Z2 Mini delivers unthrottled performance for single-threaded applications such as CAD. And it offers more than three times the graphics performance of an HP business-class mini. Pre-installed HP Performance Advisor helps to keep your system operating at its peak, and HP Z Turbo Drive speeds handling of large CAD files.

Expandability and easy maintenance. A true, professional workstation accommodates growth, and the Z2 Mini is no exception. It comes with two SODIMM memory slots, one 2.5" internal drive bay, and one M.2 PCIe expansion slot. With tool-free access to internal components, it lets you easily and efficiently replace and upgrade parts — say, if you want to boost processor or graphics power down the road without investing in an entirely new machine.

Reliability. HP workstations are designed and tested to a higher standard than commercial PCs, built for a five-year life, and warranted for three. The Z2 Mini had 368,000 hours' total quality testing to ensure stable configurations that support demanding applications over time.

ISV certification. When you opt for an ISV-certified HP Z Workstation, you get a system that has been tested by the CAD software developers themselves to ensure the computer supports their applications. The Z2 Mini is ISV certified for the same applications as the HP Z240 full-size workstation, including most Autodesk and Adobe software, SOLIDWORKS, ArchiCAD, SketchUp, and many others.

It's incredibly small
Measuring a mere 8.5" x 8.5" x 2.3", the HP Z2 Mini is ten times smaller than a traditional tower workstation and weighs in starting at 4.5 lb. It can be the perfect answer to the challenges of today's shrinking workspaces and "clutter-free" office standards. Mountable under a desktop, behind a desktop display, or on the wall via VESA mount, it can virtually disappear.

It's affordable
Priced from $699 to $1,739, the HP Z2 Mini was created for customers who demand a high-quality, flexible, performance-driven system on a budget. A configuration with an Intel® Core™ i5-6500 processor, 8 GB of DDR4-2400 non-ECC SDRAM, 1-TB 7200 rpm SATA hard drive, plenty of ports and room to expand, and ENERGY STAR® certification, runs $919 retail (at the time of publication).

The Z2 Mini naturally reduces energy consumption, thanks to being significantly smaller than standard and small form factor (SFF) workstations — and you can save even more on the utility bill if you opt for one of the ENERGY STAR®–certified configurations.

It delivers optimal cooling and noise control
If your work demands focus, you'll appreciate that the HP Z2 Mini is 63% quieter than an HP business-class mini PC, even when running a heavy load. The state-of-the-art venting and custom-designed fans, combined with HP expertise in system Integration and closed-loop control, result in best-in-class thermal and acoustics performance.

It connects to as many as six monitors
The typical CAD professional today uses at least two monitors, whether it's to keep tabs on e-mail alongside CAD work, or to double screen real estate to work on large or highly detailed models. With the HP Z2 Mini, "dual monitor ready" is the standard. With a discrete GPU, that number increases to six — at a price/performance ratio that HP calls "disruptive."

It looks really cool
A desktop computing revolution is under way, with users no longer settling for utilitarian black boxes. In a 2016 survey by HP, end users ranked design as the no. 2 workstation concern, behind performance. Millenials want products that look good and that they can be proud of (52% say design is important when choosing a PC), and 82% of IT decision-makers feel that the technology used by employees is a reflection of their company, according to HP.

The most uniquely designed system in HP's 35-year workstation history, the Z2 Mini has think-outside-the-box lines, angles, and finishes. Lead designer Paul Drew said his team aimed for a premium look and feel, adding black chrome on the vents and a surface inside the vent guards "that reflects light onto the chrome and gives it sparkle." Although the HP Z2 Mini offers flexible options for mounting, "it is designed to be celebrated on top of your desk"; designers hope the iconic design will elicit an emotional response from the user.

It's uniquely suited for CAD
The HP Z2 Mini doesn't support CAD by happenstance. HP developed it from the ground up with CAD users top of mind — in fact, the company conducted extensive research and customer interviews to determine exactly what CAD users needed in a new workstation. The answer: "Give us performance in a small, attractive package." From its high-frequency processors and powerful graphics options, to ISV certification and system reliability, to its iconic design, the HP Z2 Mini has everything required by 2D and entry-level 3D CAD users in AEC and product development.

► A Design Tour of the HP Z2 Mini, Part 2: The project’s lead mechanical engineer discusses the achievements — and the challenges — of designing the world's smallest workstation.