With the details of AMD’s Zen processor architecture unveiled years ago, the industry has long expected that the company would return to performance-focused client and server computing. (This column has touched on the possibility several times, including at length back in early 2016.) Zen promised to be the phoenix to return AMD’s CPUs to credibility — if not outright superiority — in high-performance markets currently dominated by Intel. The workstations that power the majority of CAD workflows represent such a market, and one that AMD would certainly like to participate in again.

Despite its consistent history as a supplier of workstation-class graphics hardware (albeit second to NVIDIA), AMD has been essentially absent from the workstation CPU market for the better part of a decade. After a brief surge on the back of the industry-disrupting Opteron-brand Hammer CPU back in 2006, AMD faded to a negligible presence in workstation CPUs by 2009.

Opteron introduced 64-bit extensions to the x86 instruction set, and memory attached directly to the processor. With those two key technologies, Opteron proved compelling enough to entice most of the top original equipment manufacturers (OEMs) of the day — HP, IBM, Sun, and Fujitsu — to build workstations on its platform. Only Dell passed — a choice that in retrospect proved to be the right one, as poor execution of Hammer’s successors eventually doomed Opteron’s long-term prospects in the market. By the end of 2010, AMD’s CPUs were virtually gone from the workstation market. 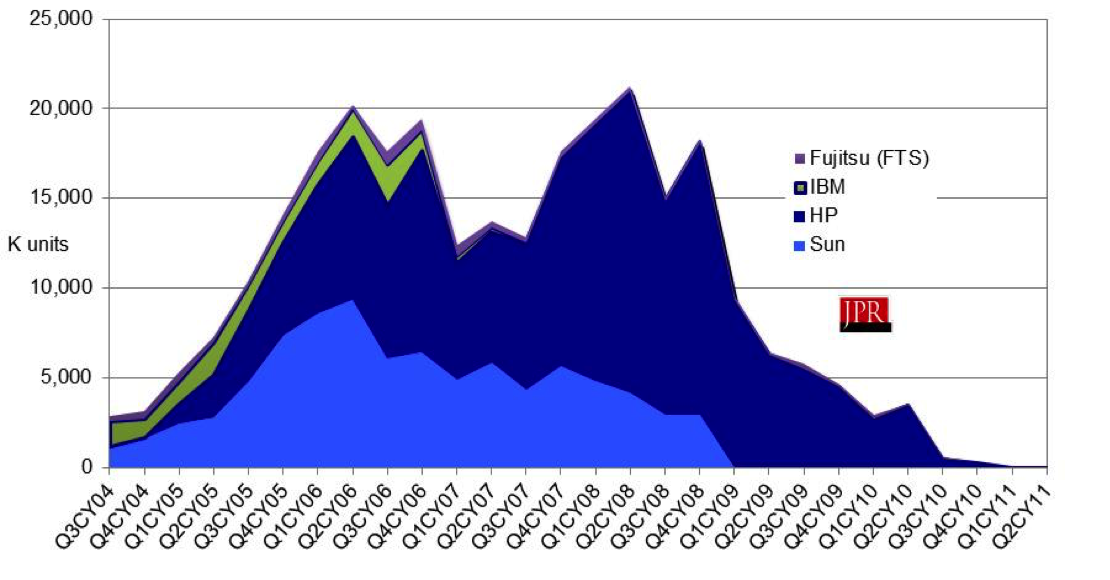 AMD’s up-and-down history selling CPUs for workstations. Note that they are almost absent from the market beginning in 2010. Image courtesy of Jon Peddie Research.

A return would be welcome to every stakeholder in the workstation market (save of course Intel, which today controls a very comfortable monopoly shipping virtually every workstation CPU). OEMs would love to see AMD back, ideally to provide much-needed product differentiation, or at least to apply pressure on Intel to remain as competitive as possible on both performance and price. Distributors, retailers, system integrators, and value-added resellers (VARs) would have more options to stock and/or recommend. Even rival NVIDIA might see a positive from an AMD CPU resurrection, as the prospect might decrease the unilateral power Intel wields over the workstation platform. And perhaps most of all, end users — especially the bulk of the CAD community — stand to benefit from AMD’s return, with renewed competition likely to improve the performance, capabilities, and prices of workstations … exactly as it did a decade ago.

Zen finally arrived in 2017, first bearing the Ryzen brand for consumer and corporate markets and spearheaded by the flagship Ryzen 7 CPUs focusing on performance-focused desktops. In addition to Ryzen 7, which looked to take share from Intel’s Core i7, came Ryzen 5 and Ryzen 3 SKUs that naturally line up against Intel’s Core i5 and Core i3. While both vendors’ 5s and 3s may play a smaller role, the higher-performance 7s are the more natural fit for mainstream entry-class CAD workstations. Subsequently launched at the top end to make a play for premium gaming PCs and single-socket (1S) workstations is the more recent Ryzen Threadripper, featuring 16 cores to top both Ryzen 7 and the best of Intel’s Core brand SKUs. Most recently, AMD spun off yet another Zen derivative, Ryzen Pro, which is essentially Ryzen 7 shaped for commercial desktops.

Client PCs were never the only focus of Zen, and even more strategic to AMD’s long-term interests was re-establishing a competitive footing in servers. Accordingly, the company followed up Ryzen with the Epyc brand of server-oriented processors that combined multiple Ryzen chips in a multi-chip package (also how Threadripper was constructed) to hit higher levels of core count and performance. With dual-socket (2S) workstations sharing platforms with dual-socket servers, Epyc is now also a viable candidate to serve the top-end tier of 2S workstations as well.

Add up all those Zen CPU brands, and today the company has not just one, but many hopeful CPU contenders to serve the breadth of workstation applications, especially those that tend to serve CAD users and applications. Ryzen 7, Ryzen Pro (both up to eight cores), Ryzen Threadripper (16 cores), and scalable Epyc are all aggressively priced and an appropriate fit, potentially addressing all four of the established deskside workstation product tiers currently dominated by Intel: entry-class desksides, premium single-socket workstations, and the latter for dual-socket models. Entry-level 1S machine buyers that would have naturally defaulted to Core i7 will potentially consider Ryzen 7 and Pro. Premium-level 1S buyers might see Threadripper as the most appealing, and the 2S workstation buyers could find Epyc a viable alternative.