Herrera on Hardware: You know that the deskside form factor is the familiar mainstay of the CAD workstation world — but do you know why?


As we covered in the first part of this series on modern form factors, the makeup of the workstation market has changed dramatically over time. Particularly in the past several years, the variety of models has exploded. The few deskside towers that have carried on since the workstation’s inception have been joined by a broad range of mobile, datacenter, and even wearable workstations of all sizes and capabilities. In this continuation of the series, we’re going to start digging deeper into these options, starting with the current landscape of offerings in that oldest and most traditional segment: desksides.

Mention the word “workstation,” and the first image that will come to most — and perhaps especially those with a history during the machine’s heyday of the late ‘80s and ‘90s — is the deskside tower. Today, despite the incursion of mobiles, the deskside (also called desktop or fixed) workstation remains the most popular type chosen by professionals, especially those in the largest served market: CAD. Overall, deskside workstations represent about two-thirds of all models sold worldwide, according to Jon Peddie Research.

The deskside form factor remains popular for good reason. While a mobile machine would probably be preferable to many, all else being equal, the truth is that all else is not equal. Creating a mobile version of anything requires compromises, not only due to power limitations but — perhaps even more critical today — cooling limitations. Driving up performance and capacity invariably requires adding more components, which run at higher frequencies (and to a lesser degree, higher voltage). That makes it increasingly difficult to compensate for the additional heat produced inside the chassis. And cooling, accomplished primarily through airflow, is much more effective when the thermal density is lower and there’s more volume to push airflow. Ultimately, while mobile workstations have made tremendous strides in performance and capabilities, a deskside tower can pile on the most performance and most capacity, period.

Now, the typical consumer and corporate user today don’t necessarily need to push performance and capacity any higher than what a modern, mainstream notebook computer can deliver. And that’s one main reason we keep hearing about the stagnation in broader PC markets: Many have hit the point of “good enough” computing using hardware far from the cutting edge of capabilities. CAD professionals are different from those users, however; they’re motivated to continually search out tools that can help them churn through visual and compute-intensive workloads more quickly. For most, speedups quite literally improve their business’s bottom line.

Accordingly, while most consumers and corporate users would gladly trade in their deskside for a mobile, CAD pros typically won’t. They may very well (and likely should) demand a mobile workstation to complement their deskside (and we’ll get into the rapidly evolving mobile segment in the next installment of this series), but when it comes to choosing the machine that they will rely on for maximum productivity while running modern 3D workflows at the office for the bulk of their workday, the deskside tower still rules.

Of course, on the flipside, what you give up when choosing a deskside is mobility. And while, again, it would certainly be nice to have a machine that can travel, the truth is that most workstation users still do the majority of their mission-critical work in the office. So giving up mobility to get a more reliable, more expandable, more serviceable, and potentially higher-performance machine is the right tradeoff for most.

The fixed/deskside market for workstations is diverse, but today generally centers on five models that present a de facto standard across the industry, especially among the top-tier vendors Dell, HP, and Lenovo. Four towers, ranging from full-size to mini-towers, include the Premium 2S (dual-socket), the Entry 2S, the Premium 1S (single socket), and the Entry 1S. And beginning with HP’s seminal and legitimately game-changing launch of its Z workstation line in 2009, the Entry 1S model also often comes in a small–form factor (SFF) version, far slimmer and capable of both deskside or horizontal desktop orientation. In general, the deskside models grow step-by-step in size, performance, and capacity, starting with the Entry 1S SFF all the way up to the Premium 2S machines. 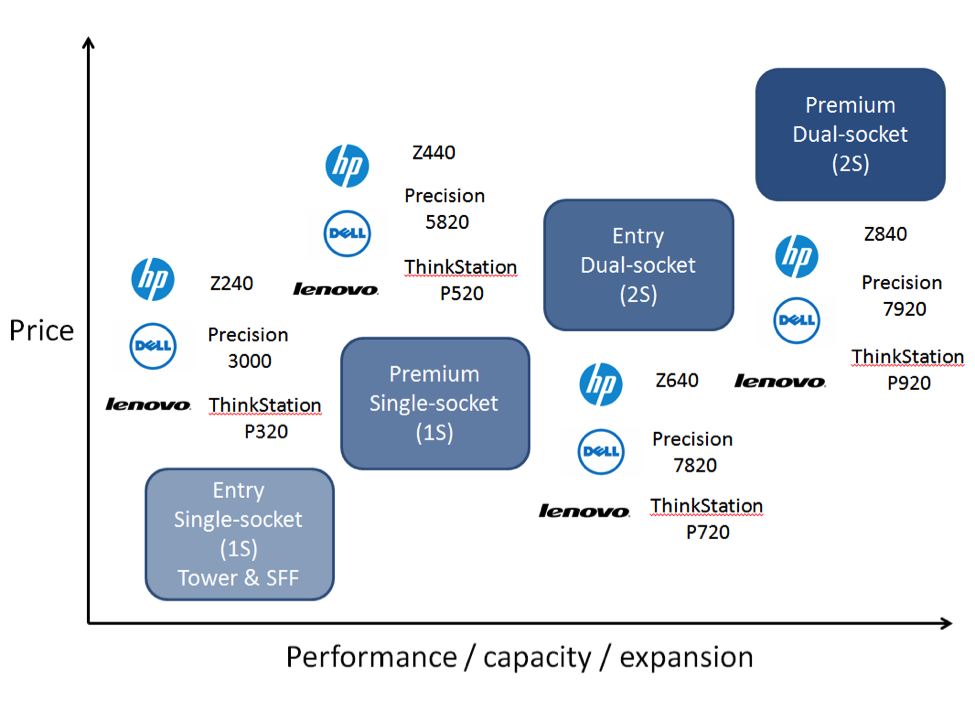 For the most part, the industry has settled on five primary deskside workstation models.

Today, Entry 1S machines offer a single CPU socket supporting mainstream, quad-core Intel Core and Xeon E3 processors, complemented by up to 64 GB of system memory, and one or two graphics processing units (GPUs), which are mid-range in terms of both performance and power consumption (the latter of which is the real constraint). The SFF version, of course, makes a few compromises to allow for the more compact size, with maximum storage and GPU support trimmed. Both the number of discrete add-in GPUs (either NVIDIA Quadro or AMD Radeon Pro) and the type are limited, with SFF models typically supporting just one entry(-ish) card, often a low-profile version (shrunken in both width and height) to accommodate the smaller chassis and volume. Examples of Entry 1S models include HP’s Z240, Dell’s Precision 3000, and Lenovo’s ThinkStation P320.

Stepping up from the Entry 1S to the Premium 1S model tends buy a bit more of everything. Though still limited to a single CPU socket, the CPU SKUs offered deliver more processing cores, today ranging from the Entry 1S’s quad-core Core and Xeon E3 SKUs to the maximum 18 cores of an Intel Xeon W processor. Memory jumps from 64 GB up to around 256 GB, and storage climbs roughly 50%, from 2 TB of high-performance PCIe solid-state drive (SSD) or 18 TB of SATA hard-disk drive (HDD) to around 3 TB and 24 TB, respectively. GPU support improves, allowing two add-in GPU cards, each of which can be dual-width, high-wattage GPUs like the Quadro P5000 or P6000. To support all that additional workstation horsepower comes a heftier power supply unit (PSU), up to somewhere in the 750 to 1000 watt range.