Herrera on Hardware: Mobile workstations have boomed since their relatively recent introduction. What does that indicate about CAD users’ workflows, and what options are available to you?

In short order, the mobile workstation has grown to represent about one-third of all workstation sales — and its success makes perfect sense. More and more, we’re all out of the office, working on the road for business or at home on odd hours, flextime, or the weekends to catch up. In this environment, a machine that travels, and is optimized for professional workloads, is a no-brainer complement to the deskside workstation at the office. Accordingly, individual users and big enterprise procurement professionals alike are opting for mobile workstations over the conventional corporate-issue notebook PCs which were the standard in the past.

Like the deskside segment covered previously, the mobile portion of the workstation market has diversified extensively over time. What was once a single- or dual-model product line in the early 2000s is now a portfolio of anywhere from a few to many, depending on the OEM. And as they’ve done with desksides, top-tier providers like HP, Dell, and Lenovo have settled on several de facto standard form factors, augmented by both emerging and niche variations on the standard models.

The foundation of the mobile workstation market remains the two primary workhorses, differentiated and primarily defined by the screen size: the 17" and the 15". The 17" serves a minority but non-trivial portion of the user base: Those who demand the highest productivity solution — one combining the largest display and maximum performance. Like a deskside (though not to the same degree), the bigger mobile package of the 17" allows not only for more components to be stuffed in, but for those components to consume more watts and therefore be capable of higher performance.

Delivering a more balanced blend of form and functionality, the 15" models sensibly command the lion’s share of mobile workstation volume. Given the popularity of the size and the growing overall appeal of the mobile workstation to CAD professionals in particular, it’s no surprise that it’s the 15" that’s received the most attention in diversification. Original equipment manufacturers (OEMs) today typically offer at least two 15" models: a standard model favoring performance, and something in the more recent “Thin ‘n’ Light” category, trading off a bit of capability for a slimmer profile. Where a conventional 15" model runs about an inch thick, the Thin ‘n’ Light trims that by about 25%. Why no 17" Thin ‘n’ Light? Simply because it’s a bit of an oxymoron, slimming down a model that a buyer specifically chose over the less bulky and more popular 15" offerings. The point of the 17" is usually to favor maximum capabilities over form, so there’s little motivation to thin it, especially when that likely means compromising performance in the process.

The top two suppliers by volume, HP and Dell, have both added a third 15" offering, a value-focused version that delivers (roughly) the performance of the Thin ‘n’ Light with the dimensions of the thicker regular model. As such, each company now markets one 17" and three or more 15" models as standard offerings. Dell lines up its 17" Precision 7730, the workhorse 15" Precision 7530, the Thin ‘n’ Light Precision 5530, and the economy-oriented Precision 3530. HP goes a step further in model count with the ZBook 17, the mainstream ZBook 15, the Thin ‘n’ Light 15" ZBook Studio, and the value-focused ZBook 15v and two 15" Thin ‘n’ Lights, the ZBook 15u, and the premium creative-oriented ZBook Studio. Lenovo, number three in volume, offers up its 17" ThinkPad P71, the 15" ThinkPad P52, and the 15" Thin ‘n’ Light P52s. Lenovo has no economy-focused 15" option at the moment, as for the most part, a lightly configured P52 can fill that role.

Besides scaling display size, differently dimensioned models vary in resolution, precision, and fabrication technology. Resolution today for the vast majority bottoms out at FullHD, or 1920 x 1080, though options to 3840 x 1260 are increasingly common, especially in the premium and Thin ‘n’ Light offerings. Display precision can also be dialed up, with optional technologies such as HP’s DreamColor offering more bits per color channel (red, green, and blue), which translates to a higher-fidelity image reproduction. Advanced display technologies like IPS and SVA (and variants) are becoming more economical and improving attributes like contrast and viewing angle. And finally, touch/stylus support is now a checkmark item on most models, albeit an optional one. 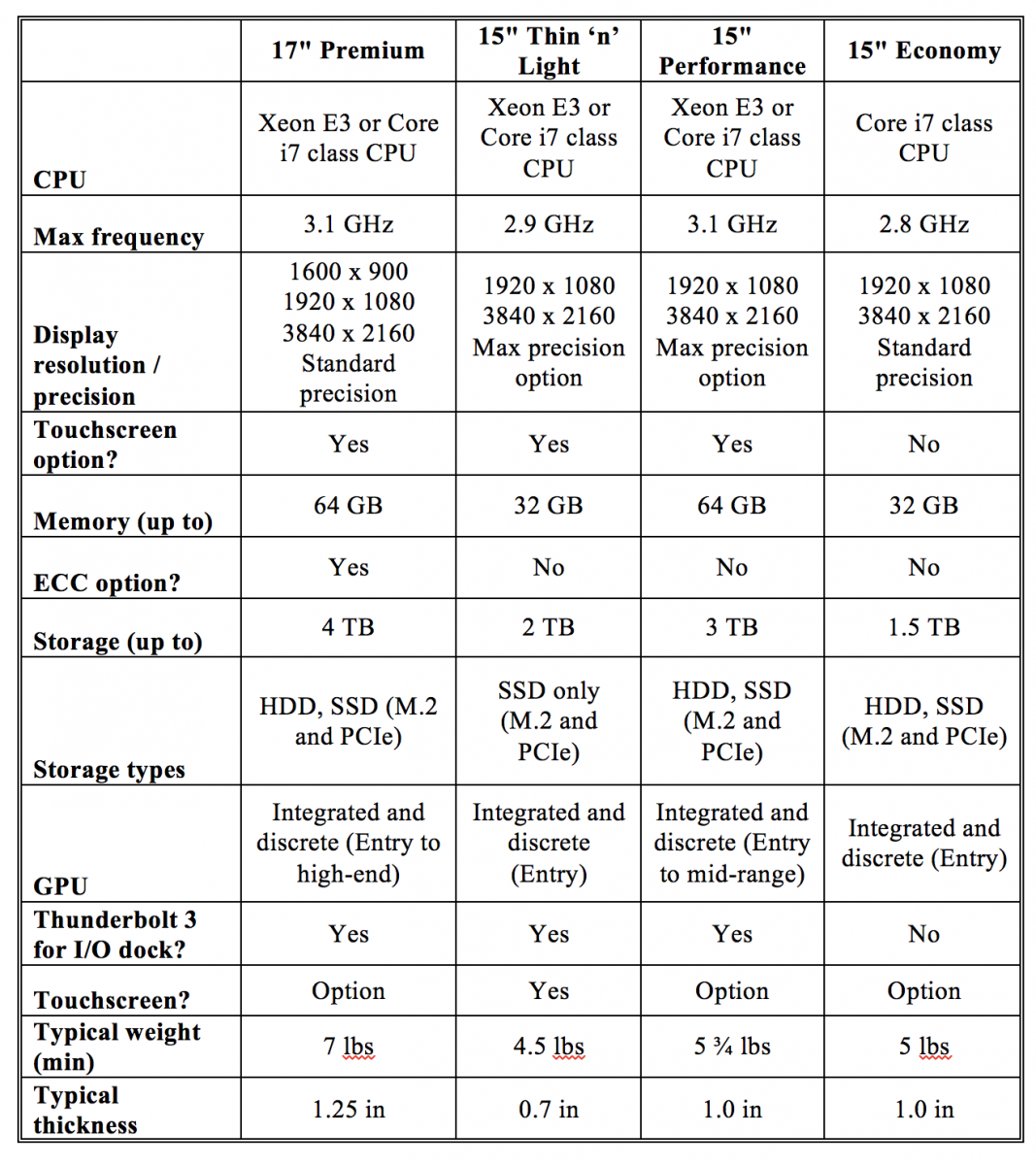 While not quite pervasive enough to make the grade as an industry-standard mobile workstation form factor, sub-15" models appear here and there among the top-tier offerings. HP, for example, recently brought the 14" mobile workstation back in the form of the Thin ‘n’ Light ZBook 14u, most recently refreshed to the G5 generation earlier this year. On its own, a sub-15" model is unlikely to be a huge revenue or profit producer, but a 14" model included in a vendor’s product line can be strategic in two ways. One, it can attack some niche markets that favor smaller dimensions (in the Far East, for example), and two, like the 17", it can help close deals with big customers that demand the broadest set of options for enterprise-wide procurement from a single supplier.

Battery Life versus Performance versus Weight

With technologies equal, higher-performance components and bigger displays require more power. The former consumes more watts not only to power the chip (e.g., the CPU or GPU) but also for the fans to dissipate the additional heat produced. Batteries are all lithium-ion based today, with capacity specified by watt-hours, and while batteries are improving capacity at the same size/weight every generation, higher capacities mean bigger batteries. And larger batteries are heavier and may make for a thicker profile, all else equal. Ditto for the power supply/adapter “brick” needed to power and charge your machine.

Adding all that up then, buyers may want to give some attention to the balance of performance, battery life, and weight when choosing a model and configuration. Besides selecting from different models, OEMs will sometimes offer two different watt-hour batteries for the same model.

HP, Dell, and Lenovo have incorporated Apple’s Thunderbolt 3 interface in their mobile workstations. Granted, calling Thunderbolt 3 an Apple interface is a bit misleading, as Intel created it, initially as an über-USB candidate for long-term high-bandwidth serial I/O. For all (or most) practical purposes, though, Thunderbolt is an Apple thing, since unlike Winux (Windows or Linux) workstations, Apple Macs rely on it for all their high-speed I/O. Because other accepted, integrated connectivity standards like USB 3.0 and DisplayPort make it less important in workstations, Thunderbolt has been anything but a requirement among offerings in the Winux camp.

So why have these OEMs adopted it for mobile workstations? Not for general-purpose connectivity, but rather because Thunderbolt 3 allows for another purpose beyond: It makes an ideal high-bandwidth interface to connect to a dock, which in turn connects to all those existing Winux-required standard interfaces. With one simple cable, users can link to the dock, which then interfaces to as many as 10 devices through an array of ports: four USB 3.0, RJ-45, VGA, combo audio, two DisplayPorts, as well as a Thunderbolt 3 port (which can further link to daisy-chained DisplayPort 1.2, USB 3.1 Gen 2, and PCIe devices). That’s far broader functionality than a mobile workstation typically manages on its own, and one that — in particular thanks to its multiple DisplayPorts — could pave the way not only for deskside-caliber I/O, but as a result help some (albeit it a minority) make a permanent switch from a deskside as the primary workstation to the mobile. 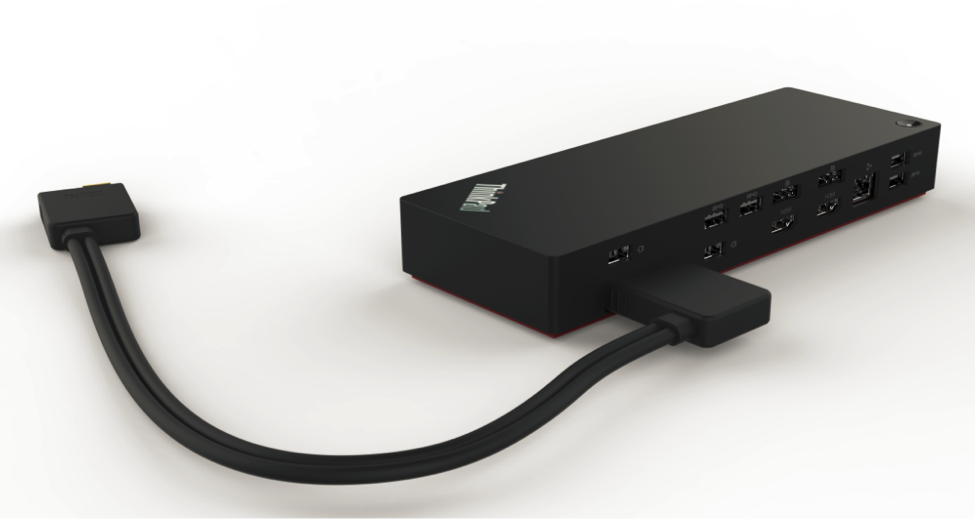 Similar to those of Dell and HP, Lenovo’s dock taps Thunderbolt 3 to provide broad, multistandard display and I/O support. Image courtesy of Lenovo.