Herrera on Hardware: Now that we’ve explored the array of local workstation options, it’s time to look at the benefits and drawbacks of those located in remote datacenters.


If I were covering workstation form factors 15 years ago, I’d have likely wrapped it up in a single column — maybe even half a column. Back then, the workstation marketplace consisted of two or three types of deskside workstation towers used exclusively at the office. But that situation has changed dramatically, fueled by the rapid diversification in shapes and sizes, maturation of enabling technologies, and the widely varying ways users are choosing to get their work done.

And as the previous installments of this column can attest, it's taking a lot more than one column to survey all of the workstation models and form factors available to CAD professionals today. (Click here to read Part 1, Part 2, Part 3, and Part 4 of this series on form factors.)

We kicked things off in Part 1 with the current incarnations of the traditional, tried-and-true deskside workstation. Then we touched on the deskside’s younger sibling, the now very successful mobile workstation, with forms ranging from ultra- to semi-portable workstations for pros on the go and in the field. But we're still not done, because so far we’ve limited our scope to local workstations — those physically located with the user. That leaves us the relatively new domain of remote workstations to explore.

Why Swap the Workstation at My Desk for One in a Remote Datacenter?

The computing landscape is changing as fast as it ever has, particularly when it comes to supporting graphics-intensive CAD. For years, users and IT personnel and procurement managers followed the same basic manual, outfitting each designer or engineer with a deskside workstation (and perhaps a mobile model for the road) … but that manual is no longer the only one to follow. Hosting graphics-intensive applications on servers is now a reality, and many are heeding the call to leverage either private datacenters or off-site, third-party clouds to solve thorny IT problems imposed by an explosion of data, physically dispersed workforces, and an emphasis on increasing security while ensuring access anytime, anywhere, and on any device.

It's not difficult to see why a single, shared workspace is attracting so much interest: It promises 24/7 access from wherever you are, by tapping a database securely tucked away behind corporate (or cloud) firewalls. With a centralized computing model, users don't have to be in the same office as their data — or even on the same continent. Storing models in one place and avoiding costly copying makes the "big data" problem far less burdensome. And since the source content doesn't leave the pre-defined cloud boundaries, it's far more secure.

Users can upload files to one central, shareable, cloud-based repository, which becomes a virtual workspace. Here, CAD team members can contribute, review, and even mark up and edit others’ content — all without the overhead and version control issues that come with moving the data.

Datacenter workstations provide high-demand visual computing on a Windows or Linux platform, with a remote server (i.e., a rack workstation, detailed ahead) performing computation and visual processing, and transmitting only the visual representation of that desktop to the user’s client device. A remote workstation solution comprises three primary components: a remote workstation host (again, typically a server node in a datacenter rack) which renders, encodes, and transmits the desktop image; a remote workstation client that displays the remotely rendered image; and an IP network (LAN or WAN), that connects the two. 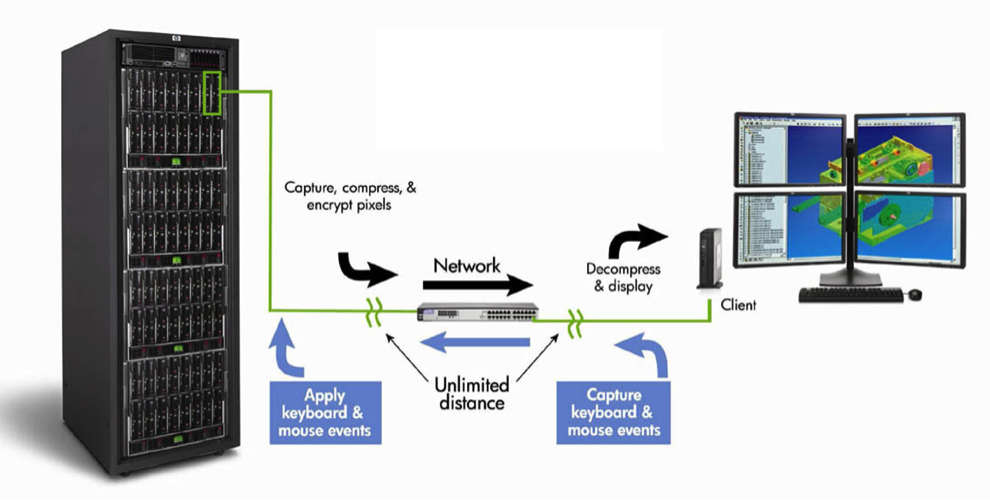 The user’s local client is typically one in a range of possible devices: from conventional laptop PCs or Macs to far simpler and more secure thin clients and zero clients (the latter is essentially a thin client without a conventional OS which retains no persistent state).

Physical datacenter workstations have their trade-offs. On the plus side, just like a traditional desk-side client, a physical workstation is “owned” by one user at any particular time, able to deliver the same performance as if that workstation were sitting at the user’s desk (assuming it’s not bandwidth- or latency-constrained). Depending on the user, dedicated resources (not just GPU but CPU, memory, storage, etc.) may be very attractive.

Exclusive ownership is also the physical datacenter workstation’s major downside, precluding much of the appeal that a centralized, server-based computing topology promises: better allocation of server resources, offering flexibility and speed in provisioning and de-provisioning to serve a broad, disparate, and often dynamic set of users.

That’s where virtual datacenter workstation solutions become so appealing: in their ability to flexibly and dynamically serve a multitude of heterogeneous clients with maximum efficiency. Rather than each node in a server rack constituting one physical workstation serving one user (1:1), each can instead host multiple virtual workstation instances serving multiple users (1:N), each provisioned with the resources that fit the specific user’s needs. (For far more detail on the approach, appeal, and deployment of virtual workstations than I’ll delve into here, please check out my four-part series, “Harnessing the Cloud for CAD: The Case for Virtual Workstations.”) 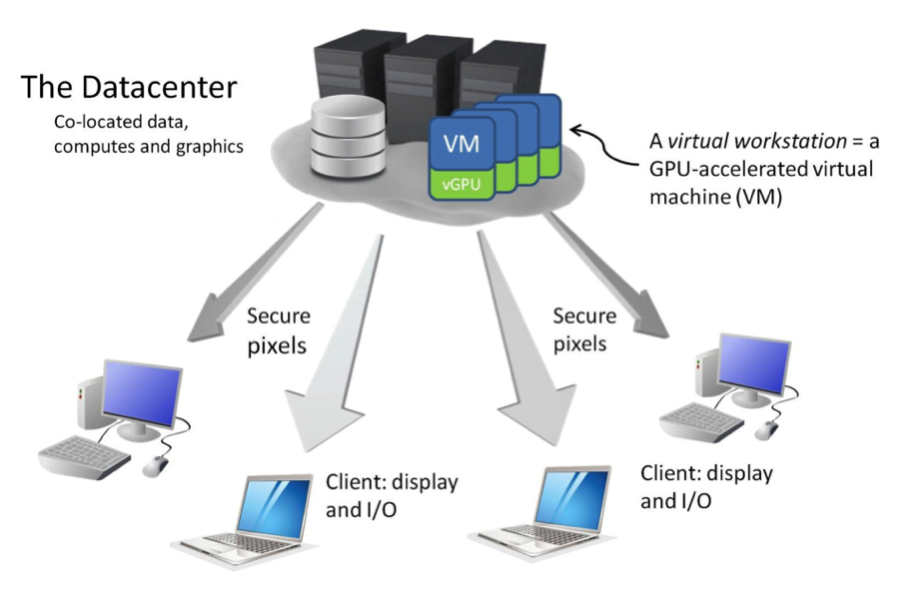 In the server-centric virtual workstation environment, the entire compute burden is lifted off clients.

In both physical and virtual datacenter workstation solutions, the computing and graphical processing happen on a server node. While a simple PC-class office application might run fine on just about any type of server node, a server acting as a physical workstation imposes different burdens on hardware configuration than one that’s hosting a multitude of virtual workstations. A new class of server, the rack workstation, has evolved to meet these specific demands.

Most rack workstations fit into one of two rackmount form factors: 1U or 2U, where “U” equals one rack unit of height, or 1.75". Just as with the conventional deskside workstations, mobile workstations, and just about any other computing device, different sizes come with different tradeoffs. The obvious one is that a 2U can cram in more CPU, GPU, memory, and storage components, as well as higher-capacity power supply units (PSUs). Its larger volume also can potentially allow for superior cooling, letting system designers run all those components at higher speeds and voltages.

One workstation vendor with a particularly bullish outlook on datacenter workstations is Dell. The number-one supplier of workstations worldwide has long offered a 2U Precision rack workstation (today, the model 7920), and just recently complemented it with a 1U model (the Precision 3930). Across the board, the 7920 out-specs the 3930, offering dual Xeon Scalable CPUs (up to 2 x 28 cores), a ridiculous 3-TB memory capacity, twice the SSD storage, and the ability to fit and power up to three max-wattage, max-performance GPUs (such as the Quadro P6000). The 3930, meanwhile, is half the size and has a much lower price point.

The 1U Precision 3930 rack workstation. Image courtesy of Dell.


The other side of the 1U/2U tradeoff is rack density. Building and running datacenters can get expensive, and managers strive to support the maximum amount of services in the smallest space (and with the least electric and cooling requirements).

What delivers the best density depends on the applications and how the services are deployed. In this case, for example, the intended usage of physical (1:1) workstations versus virtual (1:N) workstations. Optimal density can depend on the model employed, the expected demand of users being served, and — if virtual — on the number of users per node. So it could be that 1:1 workstation deployments are more effectively served by 1U rack workstations and 1:N deployments are better served by 2U systems, though that’s not a hard-and-fast rule.

While 1U and 2U form factors mark the sweet spot of the rack workstation market, that doesn’t mean every product fits the typical mold. Another aggressive player in the space is Boxx, which rather than compete head-on with big-volume Dell or HP, prefers to differentiate with non-typical products. Take Boxx’s 3U ProVDI 8401R-V: It not only delivers the highest single-thread performance (thanks to a liquid-cooled, overclocked 4.2-GHz 10C Core i7), it’s also got the expansion slot room to fit as many as four Nvidia Quadro or AMD Radeon Pro GPUs. Whereas the ProVDI 8401R-V would pale in comparison to 1U or 2U options in terms of CPU core density, it will stand out in situations where a combination of maximum single-thread performance and GPU capabilities is a priority. 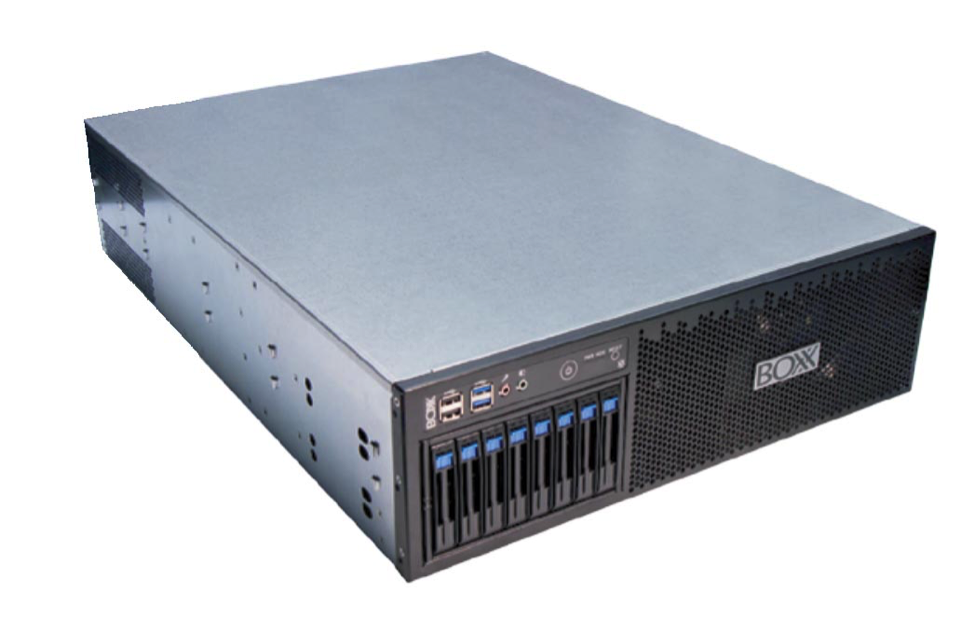 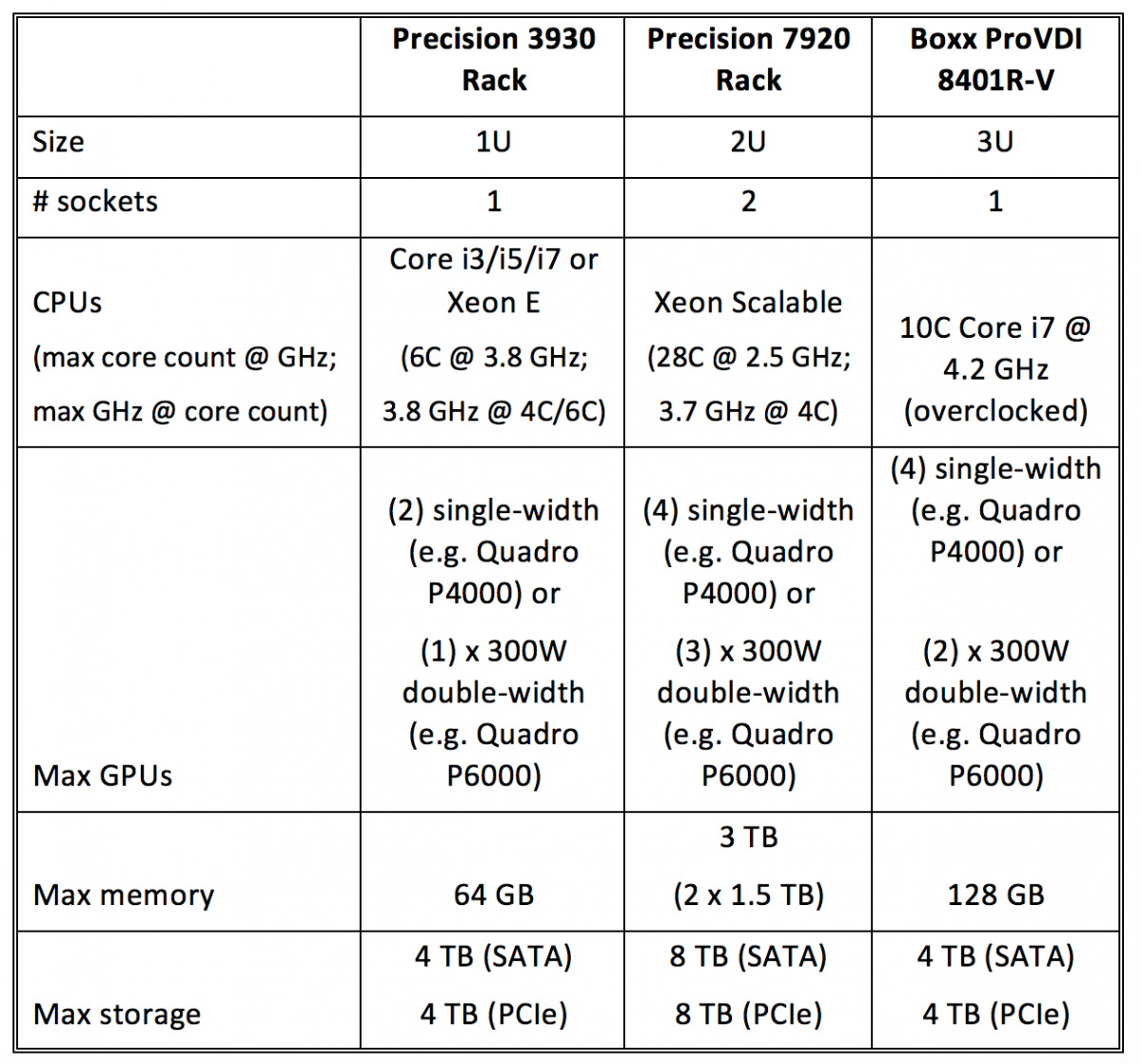 A sampling of specifications for different heights of rack workstations. Data sourced from Dell and Boxx.

When it comes to datacenter workstations, we’re talking about a novel approach that is fundamentally different from our traditional, client-focused computing solutions. Datacenter workstations, hosted on server-side rack workstations, are uniquely positioned to address the modern challenges imposed by scattered workforces operating on datasets that are exploding in size. And while average CAD users are not going to be building, configuring, and maintaining a privately owned and maintained virtual desktop infrastructure (VDI) installation, third-party cloud providers are making datacenter workstations a logistically manageable — if not downright easy — solution for small outfits and sole proprietors. For far more details on server-side workstation solutions, especially virtual workstations, check out my previous series on the topic.

Long gone are the days when CAD professionals were limited to two or three pre-configured workstation tower models. With comprehensive top-tier suppliers like Dell, HP, and Lenovo now offering 15 or so standard, customizable workstation models — complemented by all kinds of niche products filling in the gaps — there’s a workstation to support every CAD workflow imaginable. Hopefully, this series has helped paint a clearer picture on the breadth and depth of appropriate products available. The challenge now is more likely to be navigating today’s diverse workstation marketplace, but it’s a challenge likely to be rewarded in superior productivity and, quite possibly, a superior bottom line for your business.