After all those incremental steps, the industry now offers three basic workstation types — deskbound, mobile, and datacenter — each delivered in a wide range of shapes and sizes. Major, broad-market OEMs such as HP, Dell, and Lenovo market as many as 15 models, and if we take into account niche models from second-tier suppliers, there are probably more than 20 distinct forms of workstations available to serve virtually any purpose. 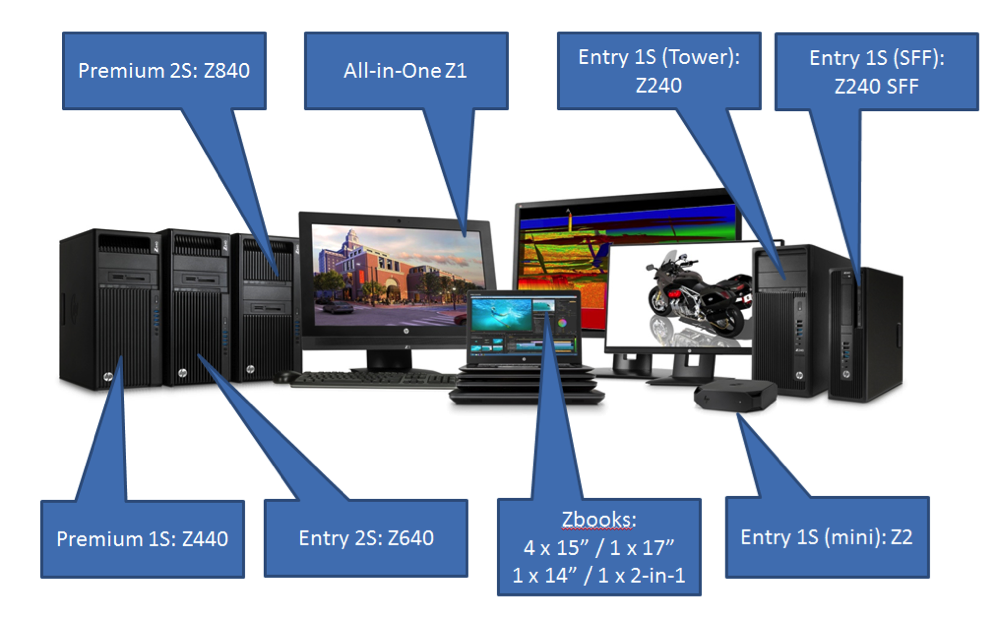 
Good Reasons for the Rapid Evolution of Workstation Form Factors

Why has the market for workstations seen such a broad and relatively rapid expansion in available models and form factors? There are several reasons:

Combine all of these forces, and it’s not hard to understand how a typical vendor’s portfolio has gone from three (or so) to, in some cases, in excess of 15 different workstation models. Let’s take a look at some of the key variables in modern professional use cases — as well as the inherent tradeoffs in addressing them — that are driving the proliferation of ever-expanding product forms and functionality.

Not all workstation computing demands are equal, particularly in CAD environments. Model size and complexity, coupled with visualization and higher-end computing demands (such as simulation, for example) will push up the required configurations for CPUs, GPUs, memory, and storage, in particular. So it’s no surprise that performance and capacity tend to vary hand in hand with the physical size of a workstation. The higher the performance and capacity, then — all else being equal — the bigger the machine. But going bigger isn’t just about making room to house more CPUs, GPUs, memory DIMMs, and storage drives; it’s also the result of one of those key engineering tradeoffs: performance and capacity versus thermal constraints.

Rather, managing the thermal output from more of the higher-horsepower components often “consumes” more space than the components themselves. That is, the higher the performance, the more air (or in more exotic systems, liquid) must be circulated to cool the system. And delivering enough cubic feet per minute (cfm) of airflow through the chassis in order to maintain proper temperatures tends to push machine sizes up further. This tradeoff of performance/capacity versus thermal constraints impacts noise levels, as well; read on for more on that subject.

The appeal of mobile form factors needs little explanation. With our laptops and phones, we all happily trade off some degree of capability in exchange for portability. Ditto for mobile workstations, now a segment responsible for enough volume on its own to justify the design, manufacture, and marketing of a broader portfolio of mobile workstation models. A product segment that was once served by a single model now offers many, with a wide range of display sizes, thicknesses, and weights, as well as emerging use models, such as convertibles serving both traditional notebook and tablet modes.

Furthermore, the advent of centralized, datacenter-resident workstations — either in use by one remote user or virtualized to serve several-to-many concurrent users — was driven largely by ever-more-mobile workforces. With your workstation housed on a server rack in a remote datacenter, the choices in clients become virtually unlimited: mobile workstations, notebook PCs, tablets, even phones in a pinch. Just about any device can suffice, letting you work out of the office effectively and conveniently.

The other side of the bigger/smaller size coin is the space a customer might have to fit the machine, and I’m not talking just about mobiles that need to fit comfortably on laps, café tables, and airplane tray tables. Users in finance and densely packed urban offices, for just two examples, are more likely to put a premium on minimal footprint. And that leads to a wider range of fixed workstation models, from big towers under the desk, to small form factors, minis, and all-in-ones on the desk, to workstations removed from the office entirely and instead installed in a remote datacenter.

The days when computer suppliers gave short shrift to look and feel are over. Apple helped make sure of that, with the success of its sleek designs schooling PC-based manufacturers as to their importance. And ever since HP raised the bar with the launch of its seminal Z line-up in 2009 — produced with the help of BMW’s Designworks industrial design group — all vendors know aesthetics can’t be ignored. After all, hard-core CAD pros may rightly care about the looks of a machine they have to see every day, so finishing touches like brushed stainless steel cases may very well matter when it comes to picking their next machine.