A Case Study in Virtual Workstations for CAD

Herrera on Hardware: The experience of architecture and engineering firm Mead & Hunt presents a compelling proof point for a new CAD computing paradigm.


The virtual workstation has arrived, offering an alternative solution to traditional client-focused environments that are beginning to creak under the strain of today’s CAD IT challenges. There’s no doubt that on paper, the centralized topology in which servers host a virtual representation of a user’s workstation — i.e., the virtual workstation — presents unique advantages to companies struggling to manage increasingly scattered staff working on huge datasets with a range of computing devices. Co-locating data, compute, and graphics in one central repository — be that in the cloud or in a private virtual desktop infrastructure (VDI) datacenter — works to alleviate those pain points hampering productivity for firms in architecture, construction, design, and manufacturing.

For more background on the concept of virtual workstations, including an extensive look at the technologies and specific solutions available in the market today, check out my four-part series, “Harnessing the Cloud for CAD: The Case for Virtual Workstations.” 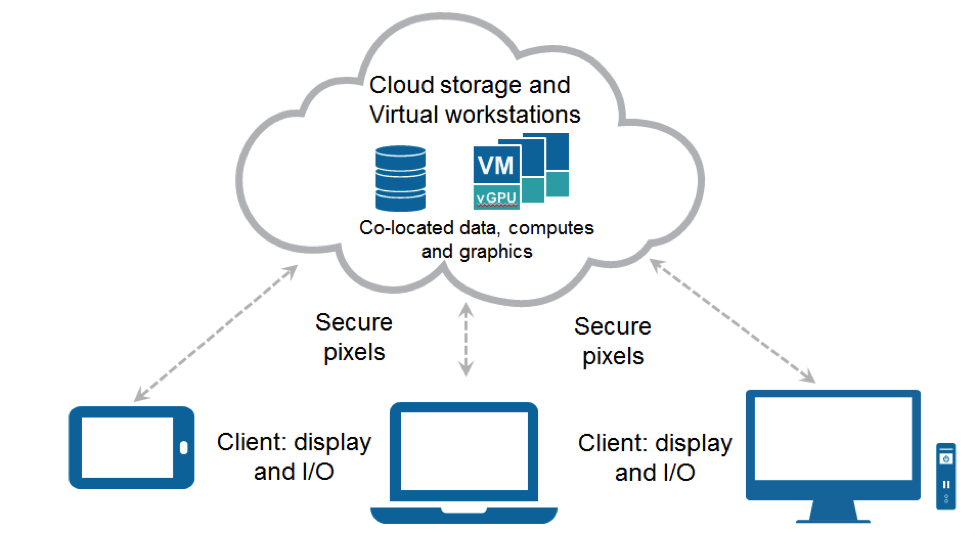 A variety of end-user devices, including those with limited processing power, can be used with cloud-hosted virtual workstations.

Although I used the phrase “on paper” in the opening of this column, that isn’t the slight it might sound like. Normally, it might be reserved to disparage technology that sounds nice in theory, but isn’t mature, accessible, or compelling enough to deliver the real-world benefits the paper pitch promises. But in this case, “on paper” simply reflects the reality that the concept and technologies are still in the early stages of adoption, and examples of their effective deployment are relatively scarce. But given that virtual workstations should eventually lead to a significant shift of CAD computing infrastructure, I’m paying close attention to the few real-world examples that do exist — and I suggest all providers and consumers with a vested interest do the same.

One excellent example is Mead & Hunt. A global engineering and architecture firm, Mead & Hunt’s fingers are spread both broad and deep across a wide range of industries and disciplines. Its workforce of 700 is distributed among 30 offices across the United States in all time zones, with staff out on construction or client sites nearly as often as they are in the office.

All those personnel need 24/7 access to the same project database, yet must avoid the perils of accidentally working from outdated copies of unsynchronized revisions. To compound the problem, those dataset copies aren’t measured in megabytes anymore, or even tens or hundreds of megabytes: Project teams had to wrestle with Revit files up to 3 GB in size, incurring lengthy, productivity-crushing delays in copying from site to site.

The Critical First Step: Centralizing Data in the Cloud

Problematic revision control and network delays resulting from the explosion of data and expansion of the company’s physical footprint were the first and most painful issues that came to the fore for Mead & Hunt, explained CIO Andy Knauf. Accordingly, years ago Knauf and his team pushed the company to transition project data to the cloud, choosing Amazon Web Services (AWS) to host and secure data for the company’s projects.

Architects and engineers continued to design and simulate on their client-side mobile and deskside workstations. But rather than downloading and copying files, they worked directly on cloud-resident data, accessed via virtual private networks (VPNs). The data was managed by Panzura controllers that specialize in cloud-source file services with multi-site file locking for distributed physical environments like Mead & Hunt’s.