When it comes to the size and shape of deskbound workstations, the workstation industry hasn't given professional users much to choose from. Buyers could pick either a full-size tower or a mini-tower, and either way had to clear out some space beneath or beside their desks.

Those who sought workstation performance but were constrained by tight space limits had only two choices: Bite the bullet and deal with a machine more cumbersome than desired, or perhaps step down to a laptop and sacrifice the benefits of a deskside machine, like the ability to configure and expand with the widest range of options available. Workstation users needed another option — and now they have it, in the small–form factor (SFF) workstation, which offers a dramatically smaller footprint than a traditional tower.

Sales of SFF workstations have very quickly gone from essentially zero to nearly a quarter of all deskbound workstations shipped, according to Jon Peddie Research. For many professionals, the SFF machine's more compact footprint, as well as reduced heat and noise profile, win out. These advantages have particular appeal in financial markets and space-constrained offices in urban areas, but you will find customers eager to downsize in virtually every workstation application.

With its CELSIUS J550, Fujitsu has taken the SFF workstation to new levels of performance and ergonomics. At approximately 10 liters in volume, the CELSIUS J550 is one-third the size of a typical mini-tower — it fits in tight environments where a conventional workstation can't. Its weight is also small: a nominal 19.8 lbs that makes moving, configuring, and installing the machine far less taxing. 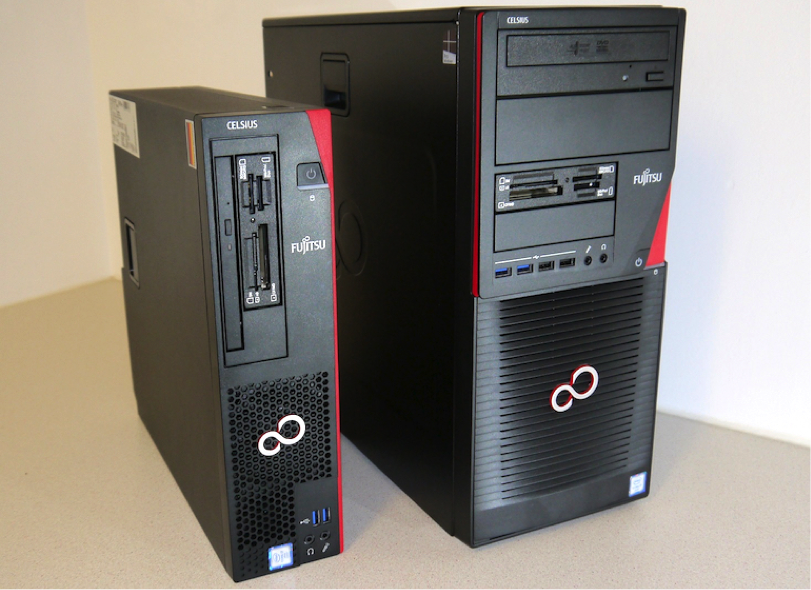 Of course, a desirable package means nothing if what's inside can't deliver the application-focused performance workstation users expect. Highly configurable, the CELSIUS J550 offers best-in-class workstation-caliber components, starting with quad-core Xeon E3-1200 v5 and Core i7-6000 series processors (to 3.7 GHz) from Intel. Supporting that CPU horsepower is up to 64 GB of high-speed DDR4 memory, and storage capacity of up to 13.5 TB. In addition to ample capacity, the CELSIUS J550 offers the ultimate in storage performance with NVMe-compliant solid-state drives (SSDs), including M.2 options that leave precious PCI Express card slots free.

The highest-performing 3D graphics in its class. Deeply rooted in the genes of any true workstation is professional-caliber 3D graphics, performance-tuned to applications from CAD to media and entertainment to education and finance. And true to that DNA, the CELSIUS J550 offers a range of AMD FirePro and NVIDIA Quadro GPU options, up to the FirePro W5100 and Quadro M2000. You won't find another SFF workstation offering a GPU with the performance of the Quadro M2000 GPU (or comparable), and for good reason: Among leading workstation manufacturers, the CELSIUS J550 is the only workstation in its class to provide the full-height PCI Express slots that a GPU like the Quadro M2000 requires.

Reliability in a Cool, Quiet Package

Designing a capable workstation configuration with a footprint like the CELSIUS J550's is no trivial feat. The obvious challenge is finding the room to fit a system's worth of workstation-caliber components into 66% less volume than comparable machines. But beyond the practical issues of limited space, there are the thorny challenges of managing system heat and noise.

Packing the same performance-driven components into a smaller volume places a far higher burden on the machine's ability to dissipate the heat those components generate. The workstation can't be allowed to run too hot, as excessive heat stresses components and is the root cause of most hardware failures. And if a system builder were to simply brute-force the cooling by maxing out system fans, then you'd end up with a machine so noisy, nobody would want go near it.

Fujitsu tackled this challenge with precise whole-system thermal and acoustic analysis, thoroughly considering the effects of the chassis's internal layout and system fan speed and location on thermal footprint, airflow, and noise. Components, including the highly efficient 280-watt power supply, were selected and combined to reduce thermal output wherever possible. The result? Designers mitigated potential hot spots and maximized air-cooling efficiency, retaining a compelling balance of performance and power consumption. Even better, Fujitsu engineers were able to limit the J550's noise to 21 db — comparable to a whisper or rustling leaves.

Given a choice between a bigger office workstation and a smaller one, if all else is equal, few would ever choose the former. But all else is not equal. Engineering workstation-caliber performance and reliability into a small–form factor chassis is a far more daunting challenge than it is with a conventional tower or mini-tower. Do it wrong, and you're left with a hot, noisy machine that can't deliver on the demanding expectations of a workstation. Do it right, and you end up with the CELSIUS J550 — a precision-crafted workstation, designed and engineered exclusively in Germany, and built in Europe's most advanced computer manufacturing facility.

Fujitsu's holistic approach to precision design results in a small–form factor machine that offers everything one expects in a workstation: mission-critical Intel Xeon processors, ample high-speed memory, and extreme-performance storage, topped off with best-in-class graphics capability. The CELSIUS J550's diminutive 10-liter chassis brings a true workstation into places it literally couldn't fit before. And it does so in a cool, reliable package that's so quiet, users probably won't even notice it's on.

Workstation users without a lot of room to spare owe it to themselves to consider Fujitsu's CELSIUS J550 — it's the small–form factor workstation done right.

To learn about product availability in your area, please visit the Fujitsu Reseller Locator website.