Herrera on Hardware: Centralized, server-side graphical computing technology is on the upswing. Should you care where your computer is?


After years of working in the era of the personal computer, we've all grown accustomed to the familiar sight of a PC or workstation tower under our desks, or a notebook or mobile workstation on our laps. But with a host of new technologies and solutions coming to market — backed by the biggest names in computing silicon, systems, and software — CAD users may need to adjust their expectations about where their computers reside.

Server-based computing (SBC) is back in the IT limelight. Granted, it has taken a different shape than in the past, and marches under several different banners: cloud computing, virtual desktop infrastructure (VDI), client consolidation infrastructure (CCI), and hosted virtual desktops (HVD), to name a few. But while they may differ in implementation, they share one fundamental goal: to move the data and heavy computation and rendering away from distributed desktops and toward a central resource, accessible by many users rather than one. Not only does general operating system (OS) and application processing happen on the server, so does rendering, with image pixel data transmitted from host to client. 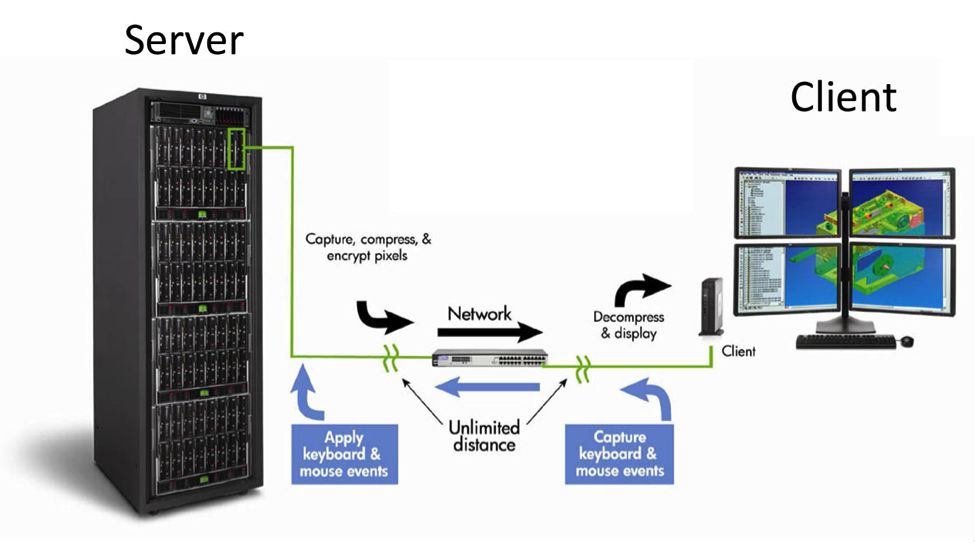 
While this recent momentum in SBC technology is unlikely to result in a one-size-fits-all computing panacea, the landscape for professional graphics certainly looks to be shifting, as new solutions are coming to market promising the benefits of SBC with workstation-caliber visual performance (wSBC).

Now, this certainly isn't the first time the industry has promoted a move to a more centralized computing model — far from it. Rather, this latest pursuit can simply be viewed as the latest wave in the long ebb-and-flow history of client/server computing. At various times in the past, the prevailing wisdom was to pack the horsepower and data users need day-to-day into the desktop unit, leaving the server as a data backup and batch computing engine. Then just a few years later, that concept of client-heavy computing would become decidedly passé, as server-centric computing once again emerged as the hot trend.

In the 1980s and into the ‘90s, the emergence of the workstation and PC pushed computation away from mainframes and minis onto desktops, spurred by the emergence of Windows and the demand for rich graphics not achievable at the time with a server-centric model. In the late ‘90s and early ‘00s the concept once again moved to the forefront, driven by the argument that IT build and maintenance costs could be dramatically curtailed by centralizing compute capabilities in the datacenter and replacing expensive "thick" deskbound clients with cheaper, simplified "thin clients."

Benefits for the CAD Community

Exploring the promised benefits of SBC, it's not hard to see why the technology is once again at the forefront, piquing the interest of many in professional computing segments such as CAD. First and foremost, it offers access to what you want, when you want it, from wherever you like, by tapping into a singular, secure database. In addition, it can provide the following benefits.

Global collaboration with 24-hour productivity. With a centralized visual computing model, users don't have to be in their office, or even on the same continent. This feature is especially valuable for modern enterprises whose workforces are scattered across the globe. With a wSBC solution, a product designer updating his or her design in a central database can share progress instantly with the rest of the team, wherever they happen to be.

It also provides the means to accomplish what was once a pipe dream for individuals and teams scattered around the world: working in a daytime-driven pipeline, where one team picks up in the morning, just as another is going home at sunset.

Security. For many, the single most compelling feature of a centralized computing topology is security. The reason is obvious: Data remains “behind the glass,” and only pixels leave the physical premises. Even the pixel streams can be secured via encryption. And with a stateless "zero client," the lack of any persistent state or full-fledged OS makes it virtually impossible to probe or hack with conventional malware. While it's an important issue to all businesses, security is of paramount concern to many in CAD-reliant product design, where protecting intellectual property under development is critical — especially when it's not the property of the designer, but of the designer's client.