Editor's Note: This article was originally published in the Fall 2010 issue of Cadalyst magazine.

The Dell Precision M6600 is the top-of-the-line model in the company's mobile workstation series. Based on Dell’s largest LED-backlit panel and Intel’s newest mobile CPU, the M6600 can substitute for a traditional office-bound desktop workstation for all but the most extreme projects. For those who require a CAD workstation for both the office and on the road (or at home), the M6600 is a single-system solution.

The Dell Precision M6600 features an Intel Core i-5 2540M and can be configured to a variety of Intel processors, including an Extreme Quad Core i7-2920XM mobile CPU (8-MB cache) running at 2.5 GHz. This chip supports a Turbo mode of 3.5 GHz when running a single core. Our review system arrived loaded with the 64-bit version of Windows 7 Ultimate. It tips the scales at 9 lbs — a bit on the heavy side, but far from the 12 lbs weight of a competitor's machine that we reviewed recently. The dark-brown aluminum and magnesium alloy chassis is rugged and measures 16.4" x 10.7" x 1.5". 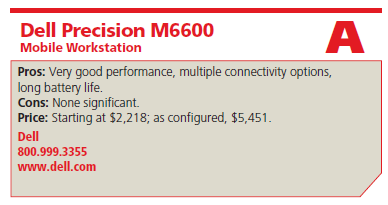 Additional key features of the M6600 include 8 GB of 1,600 MHz DDR3 SDRAM and a pair of 256-GB SATA 3 solid-state drives in a RAID 0 configuration to maximize read–write performance. (As this article was going to press, Dell announced that the M6600 is now available with two 512-MB SATA 3 SSDs for those who want even faster system rebooting and software start-up.) The unit also includes an 8x DVD+/-RW drive (with Roxio Creator Cyberlink PowerDVD), standard keyboard with number pad, touchpad and track stick (each with three dedicated buttons), speakers, microphone, and an integrated sound card. The built-in webcam supports video with a maximum resolution of 1,920 x 1,080 at 30 fps.

The Dell Precision M6600 may be the king of connectivity. It provides a wealth of external ports, including a DisplayPort, two USB 3.0 ports, two USB 2.0 ports, one eSATA/USB 2.0 combo port (for use with an external hard drive in a RAID 1 configuration for real-time mirroring of data), VGA and HDMI connectors, IEEE 1394 port, 10-in-1 card reader, smart card reader and ExpressCard slot, microphone and headphone jacks, standard network connector, and docking connector, as well as support for wireless LAN (802.11). Dell offers options for next-generation mobile broadband (WWAN) and Bluetooth 2.1 connectivity. Is there anything missing? We don’t think so.

To test the M6600's performance, we ran the c2011 Cadalyst Systems Benchmark v5.3b with AutoCAD 2011 and NVIDIA's latest enhanced AutoCAD driver (NVG10.hdi). As usual, we verified hardware acceleration for AutoCAD, turned off vertical sync for the graphics card, and set the screen resolution to our standard configuration of 1,280 x 1,024 (32-bit color).

The M6600 scored as follows: total Index of 871, 3D graphics index of 2,723, 2D graphics index of 317, disk index of 187, and CPU index of 256. Those numbers are very good and among the top scores we've recorded for a mobile workstation. The only mobile computer to top the M6600's total index score by more than a couple of percentage points had the distinct advantage of a six-core processor running at 3.33 GHz. 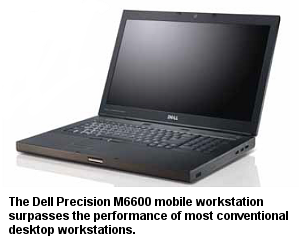 Battery Performance. Most of the time, you will run the Dell Precision M6600 from an external power source via its 240-W A/C power brick that measures 7" x 3" x 1". However, there will certainly be times when you must depend on its internal 9-cell (97Wh) lithium ion battery. We ran a pair of tests to gauge the M6600's battery performance. The first test measures the battery life (time before shutdown) while running at full speed — using the new Battery Rundown Test option available in the recently released Cadalyst c2012 benchmark. This option runs the benchmark through 99 iterations, more than enough to drain any battery available today or in the near future. The second test measures the battery life in an idle state with no applications running and the screen dimmed per the standard power settings. We started each test with a fully charged battery. We ran three iterations of each test and report the average times.

Battery life was awesome. The average time of the full-speed test was 2 hours, 3 minutes. (The next-closest competitor reviewed in Cadalyst Labs ran 1 hour, 30 minutes.) Idle-system time for the Dell Precision M6600 was even more impressive: 7 hours, 43 minutes. (That compares to 2 hours, 52 minutes for the next best.) The M6600 gave us a low-battery warning about seven minutes before it automatically shut down.

What about charging the battery? Our testing showed the 9-cell battery reaches 65% capacity (as reported by the system) after one hour and 99% after two hours. Of course, all these times are guidelines, and the numbers will decrease for the discharge times and increase for the recharge times after repeated charge-discharge cycles of the battery.

This much power in a mobile package does not come cheap: $5,451 as configured for this review. This includes three-year basic hardware service with three-year next-business-day limited on-site service after remote diagnosis. As we've shared before, we can personally attest to the excellent quality of Dell’s warranty service.

Pricing for the M6600 model starts at $2,221 — and don't forget, Dell lets you easily customize a system to your exact specifications.

As our review shows, the Dell Precision M6600 mobile workstation packs a desktop's worth of power and functionality in a mobile package. It's an obvious choice for serious road warriors or anyone who needs to use a CAD workstation in multiple locations. Highly Recommended.