The desktop workstations we review at Cadalyst are typically priced around $3,500 or less; at $6,163, the Digital Storm Slade Pro we evaluated for this review falls well outside this price range, but it’s interesting to see what that kind of investment can buy. (To see how a more modestly priced configuration of the Slade Pro rated in Cadalyst Labs tests, read our review from 2014.)

The centerpiece of the system is Intel’s high-end, 10-core Xeon E5-2687W v3 processor running at 3.1 GHz, paired with NVIDIA’s Quadro M4000 graphics card. As wonderful as the Xeon is in many applications, it simply doesn’t have the raw clock speed of Intel’s much less-expensive Core i7 CPUs, which can easily run at 4.5 GHz.

Diving in a bit deeper, we see that the CPU is supported by 32 GB of ECC-registered DDR4 RAM running at 2,133 MHz. This is an excellent RAM setup, but excessive for our purposes; 16 GB probably would have delivered similar benchmark scores. In the real world, you could probably run multiple programs with the extra RAM without decreasing performance. Storage drives include Intel’s 750 PCIe 400-GB solid-state drive (SSD), which is a proven, fast primary drive; a Western Digital 2-TB data drive; and a Blu-ray RW optical drive.

The Corsair Obsidian tower case and 750-watt power supply continue the high-end component parade. Large enough to accommodate multiple graphics cards, drives, and pretty much anything else you might want, the case is attractive and feels solidly built. It is also extremely quiet during operation: The CPU is kept cool by a water-cooling system with a 120-mm reservoir, and external fan ports are filtered and muffled. 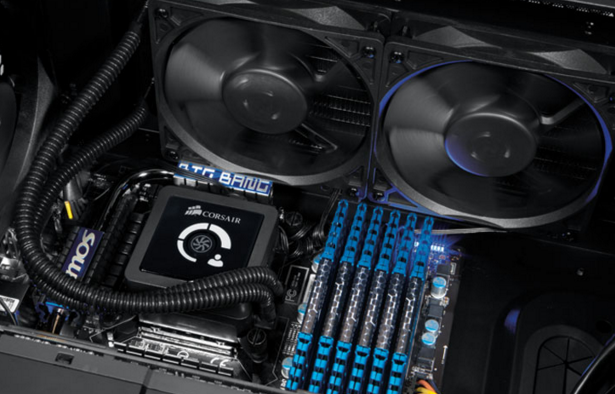 The case offers a superb array of connectivity options. There are 10 full USB 3.0 ports, plus a pair of internal USB 2.0 slots. There are also a pair of Ethernet network ports and all the audio-related ports you’d expect: line in, line out, left/right audio, headphones, and digital audio port.

The configuration price includes a 48-month warranty for labor; parts are covered for 24 months. Technical support is limited to 9 a.m.–5 p.m. (Pacific time) on weekdays.

The results of our tests are mixed. The Slade Pro’s performance with Cadalyst’s C2015 benchmarks (running AutoCAD 2015 under Windows 10 Pro) were poor for a desktop system. The total index score was 525; 3D index was 1,251; 2D index was 359; Disk index was 261; and the CPU index was 238. For comparison, another vendor’s $3,200, 4.5-GHz overclocked Core i7-based system with a NVIDIA K4200 GPU turned in a total index score of 720 in our review, which is 36% higher. Across the board, the Slade Pro came in between 30% and 40% slower on the C2015 scores than a system almost half its price. Of course, AutoCAD doesn’t take advantage of the Xeon’s advanced multicore architecture, and the i7 enjoys a clock that’s nearly 50% faster, at 4.5 GHz, so keep in mind that these numbers don’t represent an apples-to-apples comparison. 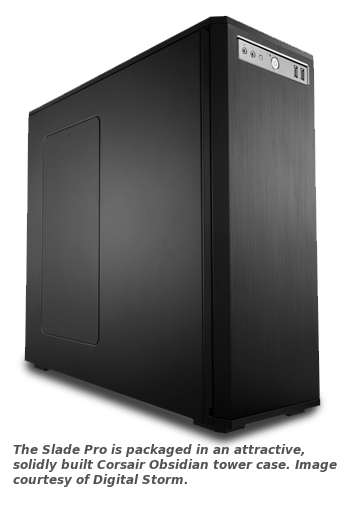 The Slade Pro came in at 12–18% faster in the catia, medical, and showcase scores, and was roughly on par in the rest. In the SPECwpc benchmarks, the system came in almost 25% faster in the composite score.

Although this Slade Pro configuration is not well suited to the testing/performance profile that Cadalyst has set, it is a very powerful system. The relatively high-cost configuration, particularly the Intel Xeon CPU, massive amounts of RAM, and NVIDIA Quadro M4000 graphics, make this machine a powerhouse when dealing with large, complex datasets in high-precision visualization applications, such as those used in the SPECviewperf energy-01 tests, where the Slade Pro blew through the benchmark with speeds more than twice as fast as you'd see in a top-of-the-line Intel i7-based workstation. To really show off the high-end visualization muscles in this system, you might consider moving up to NVIDIA's M5000 GPU, or even the M6000.

If you work in applications that make use of the high-end features of this system — such as complex visualization and heavy multitasking — this system could suit your needs. But for some uses, such as AutoCAD, you could put together a much less expensive system and get better performance.

About the Author: J.V. Bolkan