Does Thunderbolt I/O Have a Place in CAD Workstations?

Herrera on Hardware: The input/output technology supports fast, expandable storage for big datasets — but what other value does it have for CAD users?

While Thunderbolt currently holds a bandwidth edge over USB, the two clearly and directly overlap on intent. USB stands for universal serial bus — precisely what Thunderbolt strives to be, and the glaring overlap recalls a previous contention between competing standards: FireWire and USB.

FireWire caught traction not because anyone really wanted another standard, but because it delivered a performance edge compelling enough to be worth the exception. However, that edge faded, and with it faded the standard. FireWire connectors are now disappearing as a base feature on motherboards and systems, and virtually the only reason anyone would buy an add-in card adapter today is to connect to legacy devices.

Could Thunderbolt share the same fate as FireWire? Possibly. USB 3.1 (also known as SuperSpeed+) was ratified more than a year ago, driving speed up to 10 Gb/s, or Thunderbolt 1 level, with a line-of-sight to much higher rates. Moreover, USB 3.1 will also support DisplayPort, encroaching further on Thunderbolt's raison d'être. Thunderbolt's long-term place outside of the Apple computing environment is by no means a sure thing. 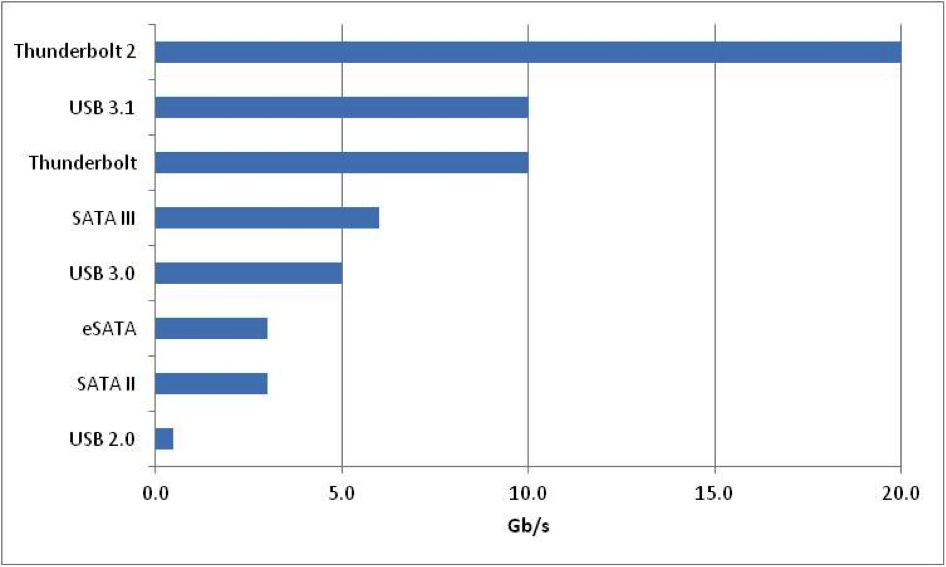 
Worth Adding to the Toolbox?

For professionals plying their trade with Apple hardware, the question of Thunderbolt is moot. You have it, and you need it — for all I/O, including display. Of course, when it comes to CAD, the Mac is the exception, not the rule. Although Apple still has its fair share of users in the digital media space, it's a distant third platform in CAD spaces, behind the dominant Windows workstations and the always-hanging-around Linux machines. And while Thunderbolt is a must-have on a Mac, it's anything but a slam-dunk as a workstation add-on.

Then, there's Thunderbolt's reduced role on a CAD-focused workstation. It's not required, nor particularly practical, for displays. There's little need for any other high-performance input or output, like 4K video. And because workstations offer numerous drive bays for copious storage capacity — in sharp contrast to the new Mac Pro — Thunderbolt's ability to expand storage outside the box doesn't offer nearly the appeal it does for those on the Apple side of the computing fence.

Finally, other storage options offer performance as high as — or even higher than —Thunderbolt 2, despite the latter's lofty peak transfer rates. First, many workstations that provide Thunderbolt as an option are also now supporting PCI Express solid-state drives (SSDs), which can perform at roughly twice the peak rate of an external Thunderbolt 2. Second, the ultimate data rate for the external drive (or drive array) doesn't depend solely on the system interface — it depends on the drive or drives inside the enclosure. If an expensive multi-drive array contains drives that support SATA II rates, then the max read rate will be limited to 3 Gb/s, regardless (with RAID 1 data-striping optionally taking write rates to 6 Gb/s max). And that's a rate that USB 3.0 can just about manage, and USB 3.1 will.

All those issues conspire to make Thunderbolt a tougher sell for a CAD workstation. Its superior data rate pays off when daisy-chaining high-demand I/O devices like displays and high-definition video. That's a must on a Mac, but it's not at all for a typical CAD workstation running Windows.

So no, Thunderbolt is not going to make sense for the majority. Still, there are some CAD professionals who may benefit from a portable, high-performance, high-capacity, RAID storage solution — emphasis on "portable." Yes, internal storage is cheaper, and PCI Express SSDs are faster, but neither travel. And a RAID storage solution on Thunderbolt 2 can (at least in theory) outperform one on USB 3.0. (USB 3.1 may change that, but it's not really here yet.)

So if you deal with big datasets — multiple gigabytes (GB), for example — that you often take on the road, need the security of RAID redundancy, and can't compromise performance while you're traveling, a Thunderbolt 2 storage solution can make sense. Also consider it if you really like the idea of daisy-chaining multiple, high-demand I/O devices in the office.  Otherwise, adding internal SATA storage will be more economical, adding a PCI Express SSD will be faster, and some combination of the two could very well present the ultimate sweet spot for a high-performance CAD workflow.