Professional, powerful CAD workstations are cheap when you realize how much wasted time they can help avoid. Here’s how to determine their true value to your company and make a case to your boss for better equipment.


Editor’s note: This article, the first in a series, is the written counterpart to Robert Green’s webinar, “Don’t Be Penny Wise and Workstation Foolish,” presented live on October 4, 2017. Following this article is a sampling of attendee questions (and answers) from the event.

There’s an old saying that goes, “Don’t be penny wise and pound foolish” — meaning, it’s unwise to save a little money today if it results in a lot of wasted money over the long run. In the CAD world, we’d be well served to co-opt our own version of this phrase, “Don’t be penny wise and workstation foolish.” It describes one of the worst yet most common trends I see: expensive employees weighed down by old computers that would work better as boat anchors than as CAD support.

Do you have trouble getting your company to update your old computers to modern workstations? In this edition of the CAD Manager’s Newsletter, we’ll begin a series that makes the case that “saving” money by using old, clunky computers actually costs more over the long term — particularly when the cost of CAD and engineering labor is considered. Interested? Here goes.

When Is Spending Cheaper Than Not Spending?

Believe it or not, there is a scenario where spending really is cheaper than not spending, and that’s when you save enough money over time to more than compensate for the up-front cost. How can this be possible? Think about a few real-world cases:

Do the tune up and light bulbs cost money? Yes. But does the expense make sense given the long-term savings? Absolutely!

When you think about the savings to be gained with some small investments, another old saying applies: “A penny saved is a penny earned.”

People Are Expensive; Workstations Are Cheap

Some accountants will disagree with me, but workstations really are cheap! In fact, I would argue that they are dirt cheap considering everything they do. 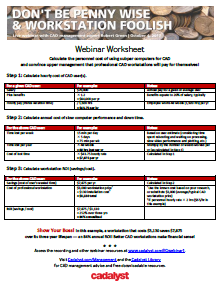 In a world of $1,000 desks and $6 lattes, a workstation that cranks out high-volume CAD work for $3,000 (or less) is not just cheap — it is an insane value. So you may ask, If workstations are cheap, what is expensive? Answer: the salary of the user who sits at the workstation! Let’s examine the case of Bill, a civil engineering technologist, to illustrate. Note: Download my Workstation ROI Calculator worksheet to follow along here and for future reference.

Bill is a civil designer who does a great deal of work using AutoCAD Civil 3D. He is often in the critical path of project completion and as such must deal with pressure and deadlines. On an almost daily basis, Bill must deal with a variety of problems that stem from his four-year-old computer that has a generic graphics card, old hard drive, and just 8 GB of RAM. These problems include:

In fact, these problems (including crashes, reboots, and slow performance) are so common that Bill figures that he wastes a minimum of 30 minutes per day dealing with them.

Using the hourly cost computed for Bill’s labor and a 30-minute (0.5 hour)-per-day waste of Bill’s time, we can calculate the true cost of Bill’s wasted time like this:

And as we all know, time equals money: The 120 hours Bill wastes each year equates to $5,190/yr — or, when tallied over the typical three-year life of a workstation, a staggering $15,570!

You may already be thinking, “That’s a lot of wasted money! Why don’t they get this guy a new workstation?” Let’s explore that thought from a financial point of view.

Now let’s consider the cost of a workstation that Bill can use for three years to speed up his Civil 3D work. If the workstation costs $3,000 and it takes $300 of IT labor to install the workstation, the total cost will simply be $3,300.

Why is it that Bill’s company is fine paying him $15,570 over three years to reboot a computer for 30 minutes a day but won’t buy a $3,300 workstation to solve that problem? Because management hasn’t done the math like we have and doesn’t understand how much money the company is losing. Let’s examine this problem from a return on investment (ROI) point of view.

But let’s take the math a bit further by performing a fast ROI analysis.  ROI can be simply calculated using this equation:

This math is compelling. Very compelling! If you have anything to do with requesting or budgeting for new workstations, you must present this math to your senior management team for prompt consideration.

Request a meeting with your senior management and/or IT management to outline the following pitch for better computers. I’ve included topics to address plus some talking points for each to help get the conversation started.) Remain calm, focused, and in control. Remember that you’re making a financial case for new workstations and keep the conversation strictly business.

If you’re suffering with old, boat-anchor computers but to date your pleas for modern workstations have fallen on deaf ears, I hope you now have a game plan for how to break the impasse. Your challenge now is to collect data on how much time is being wasted by your old computer hardware so we can move on to the next piece of the puzzle: how to configure those new workstations.

In the next edition of the CAD Manager’s Newsletter, we’ll look at some new workstation technologies, their costs, and which types of workstation should be specified for various types of users to maximize their time savings. Until next time.

Following is a selection of questions presented by attendees of Robert Green's webinar, "Don't be Penny Wise and Workstation Foolish," along with Green's responses.

A. Replace machines for the users who have the greatest total cost of time wasted due to poor workstation performance, using the forumulas on my Workstation ROI Calculator worksheet.  Here's an example:

How Do You Know When to Upgrade?
Q: We don't do much rendering (Autodesk Inventor and some Revit), running on HP Z800 workstations with 24 GB RAM and AMD FirePro V8700 graphics cards. Our systems are starting to lag and we're starting to see more glitching. How do you know when it's time to upgrade computers?

A.  I'll start by stating that my rule of thumb is any computer that's three years old should be given to a user with less-demanding software needs and a new machine given to a CAD power user. The HP Z800 is now several generations old, with processor speeds from 2 to 3 GHz and memory speeds of 800–1333 MHz — much slower than today's machines, which top out above 4 GHz processor speed and 2666 MHz memory speeds.  Add to this the slower speed of the graphics subsystem and much slower SSD technology (if your machines even have SSDs), which is now replaced by much more powerful graphics processors and NVMe solid-state drives and you can almost certainly expect 30% to 50% improvement in overall performance when upgrading to a modern machine.  If these stats aren't compelling enough, you could try benchmarking your software on a new machine to see how much time savings you actually experience. In all cases, saving user time is the real reason you should upgrade! Calculate your losses as I've described here and proceed based on those results.