First Look Review: Powerful mobile workstation boasts expansive memory and a beautiful display, but its uses are limited by a short battery life.

Of course, including all those high-end components in a mobile system results in a hefty price tag; our system comes in just north of $4,500. Speaking of hefty, the laptop weighs in at 7.48 lbs without the power brick, which adds another 2.5+ lbs. That is pretty heavy for any mobile system, and especially so for a laptop with a 15.6" display. 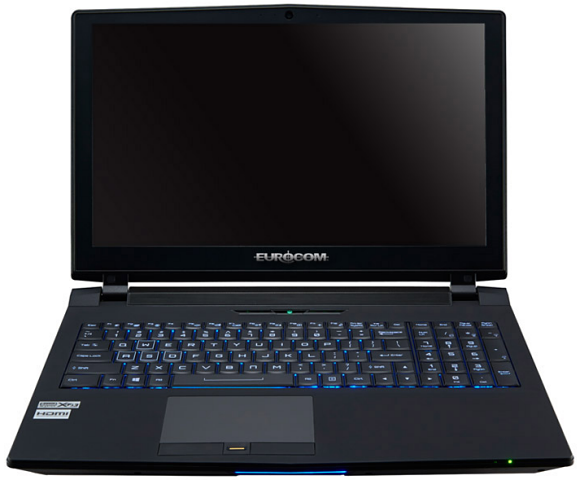 Eurocom's P5 mobile workstation offers excellent power and expandability options, but users should be ready to shoulder a heavy load and to make sure there's a power outlet handy.

You would also expect this class of components to deliver serious performance. On that front, the P5 Pro holds its own in the mobile world, and in fact compares well with mid- to high-end tower systems. Although the model we received was close to fully loaded, there are a few options, such as even faster RAM, Xeon processors, and SSD RAID configurations that potentially could push performance a bit higher. Keep in mind that even at $4,544, the P5 Pro as configured is a good value.

For a little perspective on the price, I recently reviewed a desktop system in the same price range. The performance numbers for the P5 Pro are only about 10–15% lower than that tower, which is very good when you consider the difference between the performance-to-price ratio in laptops and in desktops.

So the price and performance are solid, but as a laptop, the P5 Pro has more drawbacks than just the weight issue. You really can't lighten the load by leaving the massive power brick at home — battery life clocked a brief 1 hour, 15 minutes in our C2015 looping test (with the power-saving function turned off). Running more demanding applications could potentially exhaust the battery in less than an hour.

Eurocom offers another model, the P7 Pro, which is essentially the same system with a 17" screen. However, if you want a portable 4K retina display, the P5 is your option as the P7 Pro is only available with a standard-resolution (1,920 x 1,080) display. The P7 Pro will offer 4K displays towards the end of 2015.

I must admit that I'm torn about the screen. The 4K display is undeniably gorgeous, and I imagine that showing clients renderings or animations at the highest settings would have real benefits. However, most of the time, the ultrahigh resolution translates to too much information on not enough screen — everything is very small, but razor sharp. You can customize the resolution to remedy any scaling issues, and then bump it up to 4k for any application or content needed. The cost difference between a standard 15.6" screen and the retina versions is either $182 for the Samsung display or $391 for the Sharp. Ultimately, I feel that users who want a 4K display should hold out for a larger screen size.

The Intel Core i7-4790K (desktop class) CPU at 4.0 GHz is a favorite among system manufacturers configuring systems for the 2D and 3D CAD space, because it delivers outstanding bang for the buck and has the potential for "free" performance enhancement through overclocking (O/C). The P5 Pro does have an O/C BIOS available, but it wasn't on the system I received. Just as well, because the i7 will automatically ramp itself down when its temperature gets too high.

Performance is solid, even without overclocking. The Cadalyst 2015 benchmark (C2015) total index score of 701 is very strong. The 3D and 2D scores of 1,684 and 490 are also excellent. Unsurprisingly, the SSD (314) and CPU (314) scores are also competitive with most desktop machines. The SPECViewperf 12 scores were likewise consistently good. You can find a listing of the mobile workstation's specs and score results here. Although not listed in the official benchmark scores, I did run the benchmark suite once with the display settings set all the way up to 3,840 x 2,160 (32-bit color) and surprisingly, results were on a par with our base settings (1,920 x 1,080; true-color). The NVIDIA K5100M is more than capable of handling whatever the CPU can throw at it.

In short, the Eurocom P5 Pro is an excellent desktop replacement system. It's probably much faster than the tower workstation you're replacing, and even faster than most towers on the market today. It offers decent expandability (excellent for a mobile system), with room for two hard drives and two M.2 SSD slots (one of each was filled on our test system). It suffers a bit when you compare various mobile models, due to its substantial weight and limited battery life. The P5 Pro isn't a good choice if you work in the field or travel frequently, but if you find yourself regularly moving from one office area to another and you need elite workstation capabilities with the "wow" factor of a 4K display, the P5 Pro fits the bill.

About the Author: J.V. Bolkan