A proper CAD workstation provides much-needed support for SOLIDWORKS modeling — and even more so, for photorealistic rendering.


Editor’s note: This article is Part 2 of a three-part article series about a SolidWorks user’s experience upgrading to a professional mobile workstation (sponsored by AMD, computer supplied by Dell). See Part 1 here.

“It’s only a gut feeling, but when I’m working in SOLIDWORKS, the files seem more stable.”

That’s the reaction of Jonathan Stedman after running the 3D modeling software on a new Dell Precision 7710 mobile workstation. “As with any software that you have used for a long time,” he explains, “you get a sense when it is about to crash. Running SOLIDWORKS on the new workstation, I haven’t felt that way. Crashing is a surprise, not inevitable!” he says, reflecting on the crashes he experienced two to three times a week using his previous computer. “It feels rock solid. I can tell the machine is capable of handling large files.”

As for his previous computer, a lesser-equipped all-in-one desktop system: “I tend to do SOLIDWORKS on the mobile workstation now, and use the older machine for e-mail. Looking back,  I realize the all-in-one was adequate but underpowered.”

Stedman also notices the increased responsiveness when using AMD’s Radeon ProRender software (SOLIDWORKS plug-in currently in beta testing; see sidebar for more information). “The workstation is producing some fast results thanks to the GPU,” he says, referring to its AMD FirePro W7170M graphics card with 4 GB of onboard GDDR5 memory. “Renders are quick and easy to produce. I will continue to use the new computer to test the ProRender software. It’s showing great potential.” 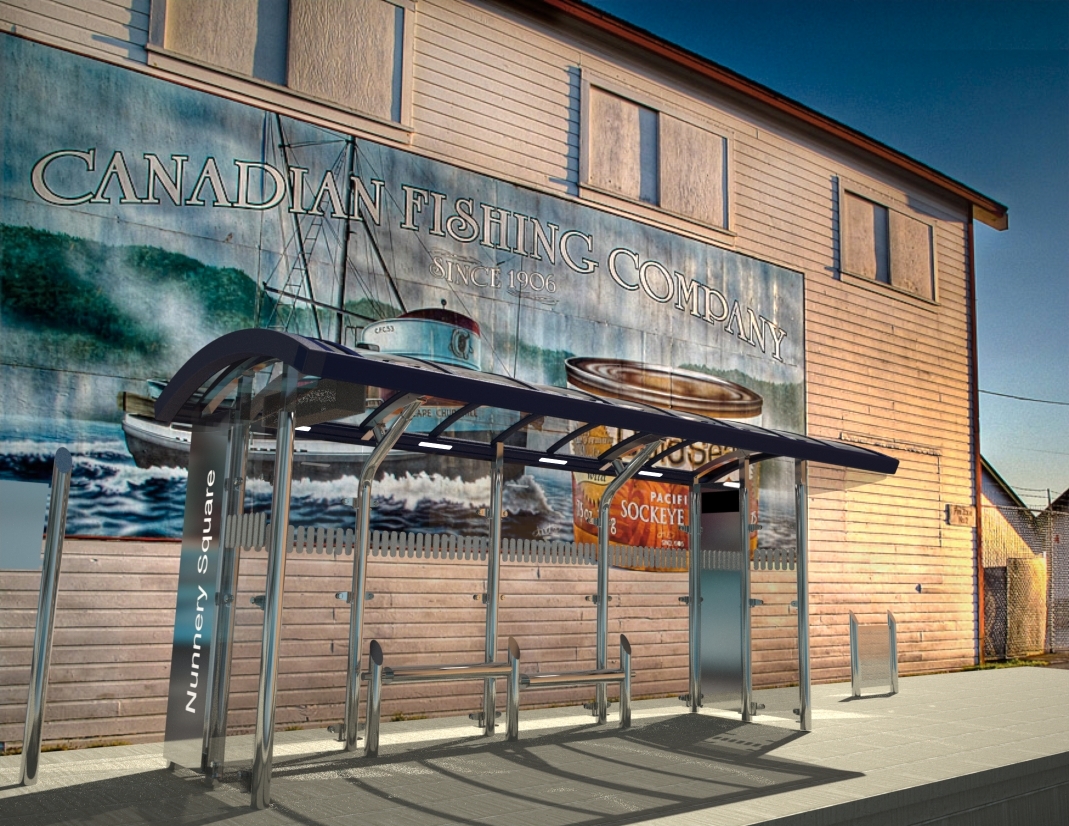 Thanks to his new Dell Precision 7710 mobile workstation with AMD FirePro graphics, Jonathan Stedman has regained the ability to use Maxwell Render to create design visualizations.

A long-time user of Maxwell Render from Next Limit Technologies, Stedman had stopped using the photorealistic rendering software a few years ago. “I have had a Maxwell license since it was launched, and when wanting to render exquisite images, I would use this software.” However, Maxwell Render is very CPU-intensive, and because his all-in-one computer didn’t have the needed CPU horsepower, Stedman hadn’t used Maxwell for a few years. “But now with the Dell Precision 7710 and its AMD card, I have upgraded to Maxwell 4. 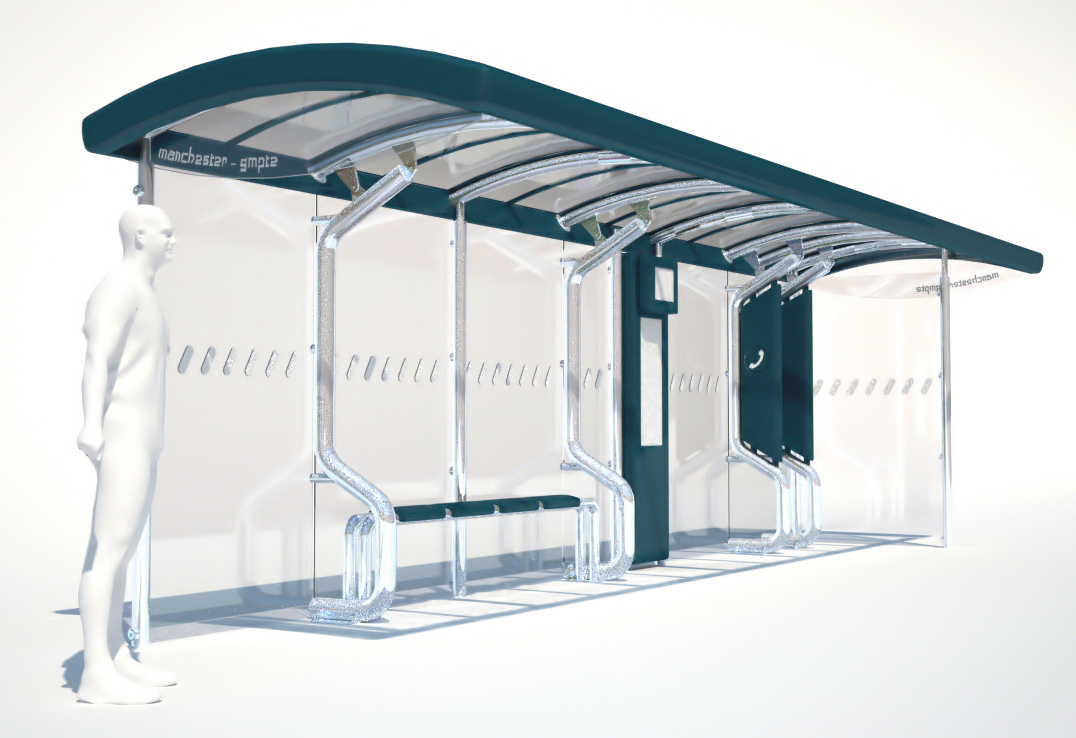 This rendering highlights the cantilevered design of this bus shelter option.

Stedman has noticed that even the most compute-intensive features of Maxwell Render are running smoothly on the new workstation. One of those features is Multilight™: “You can render something, then play with the light sources to make the lighting perfect, make it look right after you do the rendering. ...

“And I can watch rendering in progress and identify mistakes while rendering is under way, because the process is so fast. I can start rendering, and I can see the mistakes sooner, such as when textures are not right.” Stedman’s bus shelter designs are full of various textures, and renderings will reveal when they’ve been set up incorrectly, such as when wood grain textures don’t match up, he explains. “You pick up mistakes sooner now,” then can cancel the process on the spot, correct the problem, and restart. “I used to use Maxwell to render overnight when I had a lot of files. But I’d wake up and find small mistakes and have to start over. Now you see things much sooner.”

The 4K display is beautiful, but Stedman has realized it might not be for everyone. “The resolution is silky smooth and looks nice. ... It’s just perfect,” he says, except for the fact that software icons are very small and difficult to decipher. As a result, that perfect resolution has strained his eyes a bit, necessitating special glasses to use at the computer.

The 4K resolution would be great for use with SOLIDWORKS RealView (for real-time rendering with textures and reflections), Stedman says, but he’s not one to use that tool. “I prefer gray lines because they are not distracting to me. So the 4K screen is nice, but it’s not making a practical impact on my work day to day.”

Stedman appreciates the full keyboard with number pad on the Dell Precision 7710, even though it’s essentially a laptop. The integrated HD webcam (1280×720) is very good as well — possibly too good, he explains. “In Skype meetings, I have to look tidy now!” he says, referring to the camera’s ability to pick up every stray whisker. But he appreciates that capability when it’s time to share a hand-sketched design concept with his business partner. “We’ll be talking about ideas on Skype, and I can hold up paper sketches to my partner and he can see the details. In this case, a nice camera is actually practical.” 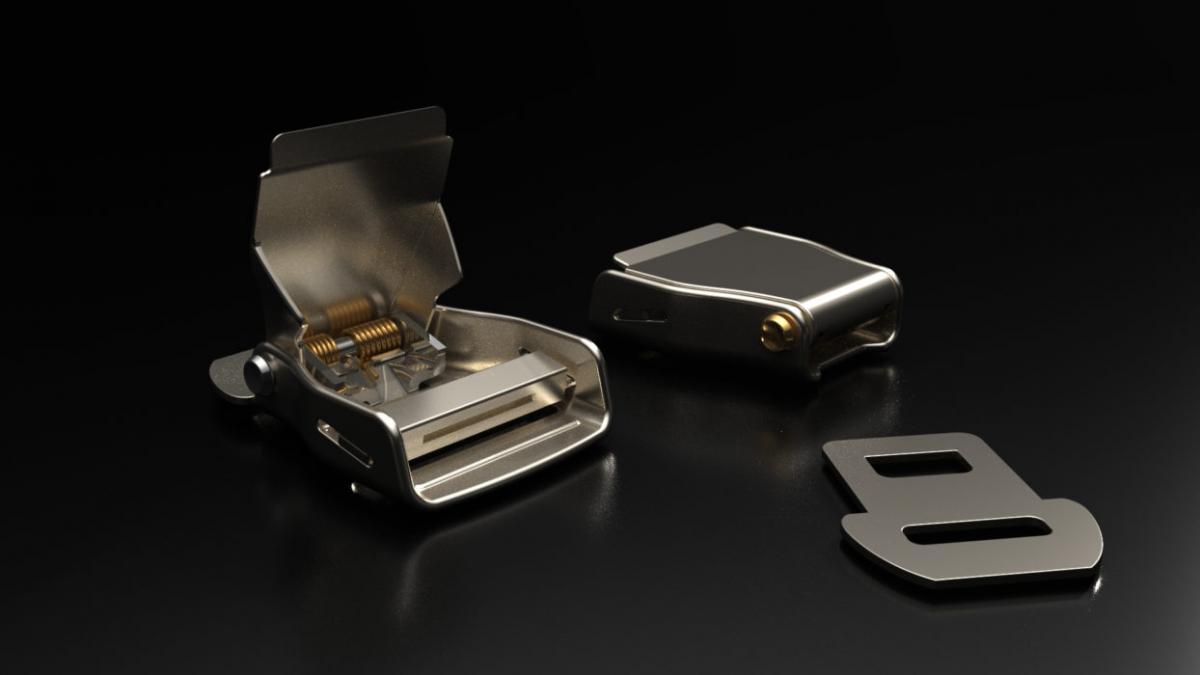 This seat belt buckle was modeled in SoldiWorks and rendered using the ProRender plug-in.

Balanced GPU and CPU computing. Unlike other renderers, Radeon ProRender can simultaneously use and balance the compute capabilities of multiple GPUs and CPUs — on the same system, at the same time – and deliver state-of-the-art GPU acceleration to produce rapid, accurate results even on less-capable hardware. Speed and accuracy. Radeon ProRender’s combination of multiple OS and hardware compatibility, rendering capabilities, and efficiency helps drastically reduce the time required to deliver true-to-life images.

Open-standards based. Because it’s built on industry-standard OpenCL™, Radeon ProRender works across Microsoft Windows®, Mac OS™, and Linux®1, and supports AMD GPUs and CPUs as well as those of other vendors.

Free to users and developers. The Radeon ProRender plug-in is currently available at no charge for SOLIDWORKS (2016 and later), Autodesk® 3ds Max® (2016–2017), Autodesk® Maya® (2015–2017), and Blender (v2.78 and later). The open-source Radeon ProRender SDK provides a C++ library to allow for easy porting into applications where a fast, high-quality renderer is needed. —Source: AMD