Unlike entry-class and mid-range workstations, high-end models such as the Fujitsu CELSIUS R940 don't compromise on speed, expandability, or reliability to improve their price-to-performance ratios.

Without question, the most popular type of workstation among visual computing professionals is the entry-level deskside, with prices of $2,500 or less. Those models make up around 60% of all workstations sold — that's roughly double the percentage of mobiles, according to Jon Peddie Research. These figures reflect typical market dynamics in which buyers have substantial computing demands to satisfy, but many other decision criteria dominate, including form factor, price, and power. Entry-level machines deliver the best performance possible, but only up to what tight constraints allow.

Climbing even further, we find the domain of the high-end workstation, a relatively small niche that's responsible for only a few percentage points in market share. But what it lacks in popularity, it more than makes up in ability. While entry-class and mid-range workstations may offer a better price-to-performance ratio, they must all make compromises. A premium, high-end workstation is an entirely different animal, shaped by a singular goal that overrides all others — to be the fastest, most expandable, most configurable, and most reliable machine available. And there's no better example of what's possible at the upper end of the workstation spectrum than Fujitsu's CELSIUS R940.

The King of Professional Workflows

A high-end workstation exceeds the capabilities of mid-range and entry-class machines by virtue of three distinct advantages: more space, more watts, and a bigger design budget. More space, in terms of system volume, means more components can fit within both physical and thermal envelopes. In addition to providing more room for storage bays, add-in slots, and memory DIMMs, the high-end machine's ample volume allows for superior heat dissipation — and that means the larger premium tower can incorporate higher-wattage power supply units (PSUs). Where an entry-class workstation might ship with a 300-watt PSU, a high-end supply like the CELSIUS R940's PSU can deliver as much as 1,300 watts.

All those extra watts go to a good cause. The high-end workstation's generous power budget not only allows for populating more components, but each component can consume more power — and a higher-wattage component, all else being equal, delivers higher performance.

First and foremost, unlike any mainstream workstation, a top-end workstation tower like the CELSIUS R940 doesn't stop at just one CPU. Instead, Fujitsu's ultimate workstation supports two of Intel's Xeon E5-2600 v4 series processors, providing a maximum core count of 44 (2 x 22) — a, order of magnitude higher than an entry-class machine's typical four cores.

Specifications that scale well beyond the mainstream permeate the high-end workstation's makeup — the memory, storage, and graphics. Where an entry-class machine might top out at 32 or 64 GB of DDR4, the CELSIUS R940 can populate a full terabyte of high-speed DDR4 memory. And it's not just in capacity where a premium Xeon-based memory subsystem sets itself apart, but in reliability as well: It supports error-correcting code (ECC) memory, which can detect and correct single-bit errors in real time.

The high-end CELSIUS R940 pushes the envelope on expansion as well, providing not the four or so PCI Express slots of an entry machine, but as many as eight slots for maximum configurability. It's that capacity, combined with superior wattage, that allows a machine in the class of the CELSIUS R940 to accommodate not one but two Quadro P6000 add-in cards, the industry's highest-performing graphics GPUs (or three Quadro P5000s).

By providing such premium components, a high-end CELSIUS R940's performance dramatically outshines that delivered by typical mid-range and entry machines, as illustrated by results for SPEC's SPECwpc 2.0 benchmark. 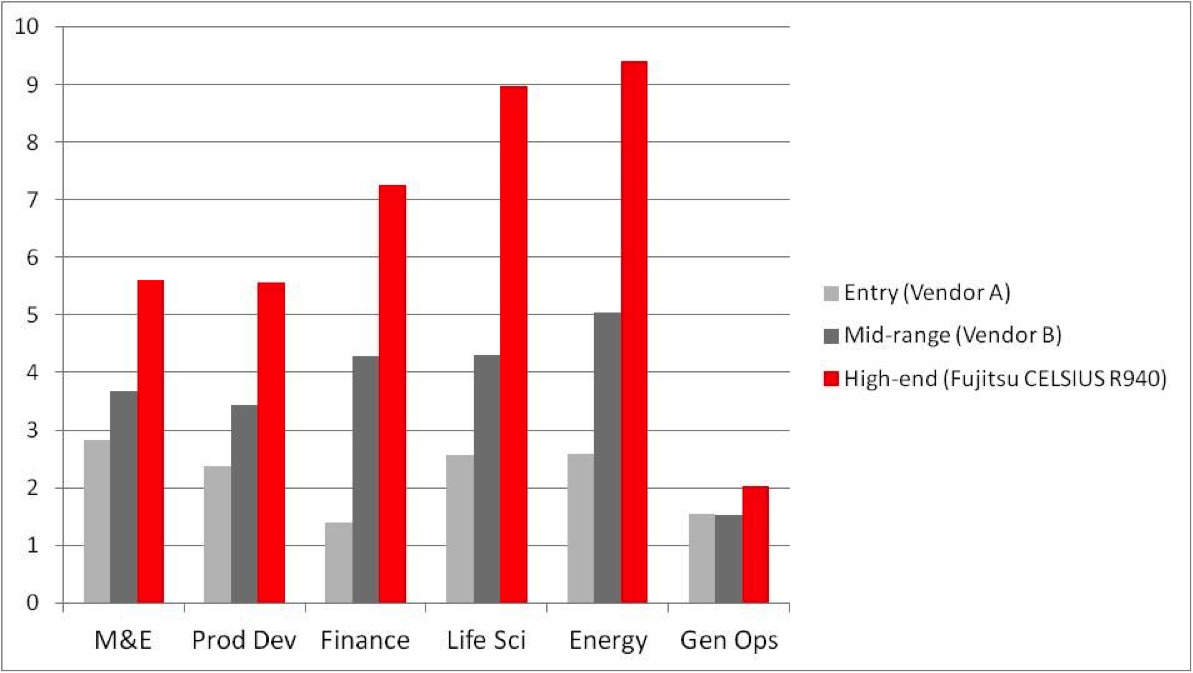 
For Some, There Is No Other Choice

A high-end workstation isn't for everyone. They're larger, more expensive, and more power-hungry than their entry- and mid-level kin. If it were possible, we would all prefer to spend fewer dollars on a tiny machine that sips the watts. But in a world where the laws of physics, thermodynamics, and economics apply, bigger budgets open the door to far higher levels of performance and capability.

Who are the right customers for high-end workstations? They represent the most critical users and are keenly aware of one overriding reality when it comes to choosing a machine. If they can't get the best possible performance and capabilities, none of those other issues matter — not the cost, the watts, or the footprint.

Such uses mandate a machine that can deliver the highest performance and reliability that can be had. Precision-engineered and built in Germany, the Fujitsu CELSIUS R940 is such a machine, leaving no design stone unturned to give the most demanding of professional customers the ultimate computing and visualization tool.

To learn more about CELSIUS, check out Fujitsu CELSIUS online. To find out more about product availability in your area, please visit the Fujitsu Reseller Locator website or contact Fujitsu directly via phone (1-800-831-3183).