HP introduced three desktop workstation models this week that Xavier Garcia, general manager and global head of workstations for HP, called “the most powerful PCs in the HP portfolio.” The completely redesigned HP Z8, Z6, and Z4 will take the place of the Z840, Z640, and Z440 in HP’s workstation lineup. The new models were designed with the guidance of three primary goals: performance, reliability, and "intentional design." (The latter, Garcia explained, means that the HP team considered “every single corner, every single feature” of these products to optimize access to components and other aspects of use.)

In addition to the workflows that currently define the requirements for powerful desktop computing — including simulation, rendering, and visual effects — HP designed the new workstations with an eye toward “new workflows that are increasing in importance in this market,” said Garcia. These include:

From the Ground Up 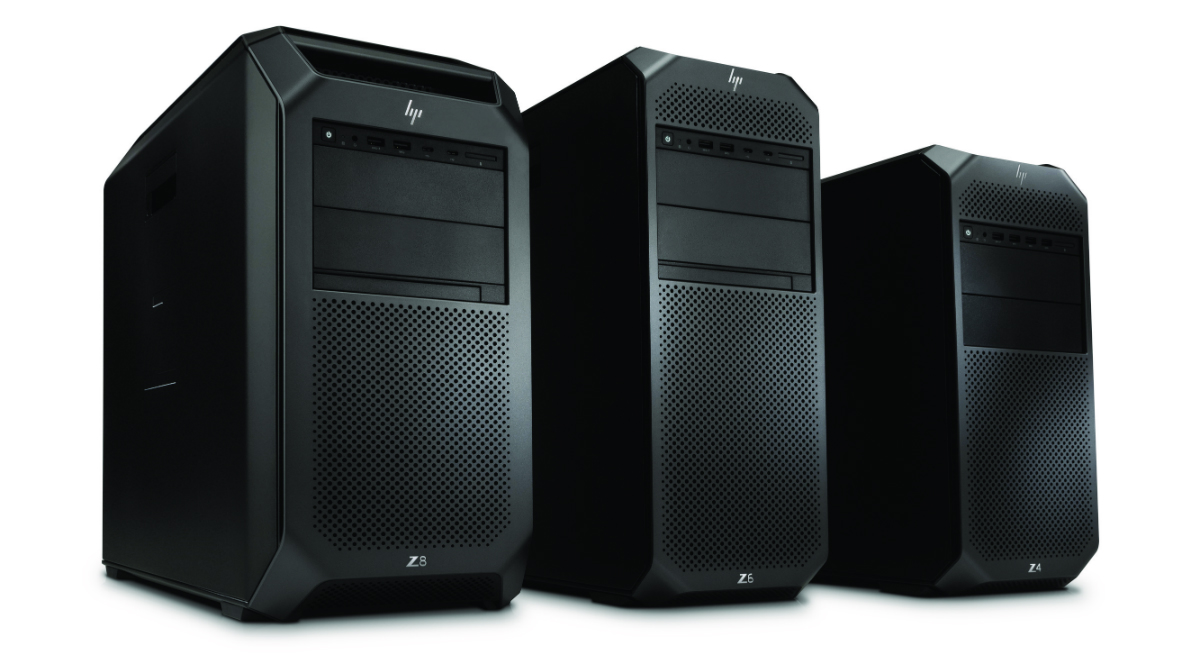 The Z8 is the most powerful of the three — indeed, it’s “the most powerful desktop workstation on the planet,” according to HP — and it’s intended for extremely demanding tasks, such as intensive design simulation. It features as many as 56 processing cores; up to 3 TB of main memory; 24 DIMMs; seven full-length, full-height PCIe slots; and two internal PCIe slots.

The Z8 also features a 1,700W power supply with a locking mechanism. Despite the high wattage, the workstation is “just as cool, just as quiet as the previous generation” thanks to a cooling system that moves fresh air to the second CPU, instead of air that’s been warmed by contact with the first CPU, said Peterson. The cooling system has been redesigned to incorporate more air intake points and more and larger fans, but has not become noisier, said Peterson: “Customers care a lot about how quiet the systems are.”

The Z4’s place in the lineup has been HP’s best-selling workstation. It’s suited for CAD and related tasks, including some simulation. The single-processor system features support for the Intel Xeon processor W family, a smaller chassis with front and rear handles, and a new dust filter option for industrial environments. The Z4 also features dual 1GbE networking, dual M.2 slots for HP Z Turbo Drive PCIe SSDs, and the ability to upgrade the front USB to include two USB 3.1 G2 Type C ports.

In addition to horsepower, the new models also emphasize security. Peterson commented, “The people working on workstations are working with the most sensitive data in the entire company. They’re the ones developing the IP, manipulating the IP, they have access to the company secrets that are completely invaluable.”

Peterson went on to explain that attacks on networks, servers, and other major components of companies’ IT infrastructure have been eclipsed by attacks on the client machines. “There’s a critical flaw in security, and that’s the human that’s sitting at the keyboard or mouse … end-point attacks are much more successful, and therefore we’ve seen a tremendous increase in end-point attacks,” he said.

To support HP’s claim that they are “the most secure workstations in the planet,” the new models feature multi-layer security that includes, in part:

The HP Z8 and Z6 workstations will be available in October, with starting prices of $2,439 and $1,919, respectively. The Z4 is scheduled to launch in November, at a price of $1,239. Thunderbolt add-in cards will be available shortly after launch.