Fourth-generation models described as most secure to date; ZBook 17 G4 can be configured for virtual reality.


HP has unveiled four additions to its fourth-generation lineup of HP ZBook mobile workstations, joining the HP ZBook 15u Ultrabook announced in January. The company describes the new models as the most secure and manageable mobile workstations to date, incorporating security features such as HP Sure Start Gen32, reportedly the industry’s first self-healing PC BIOS with comprehensive encryption, as well as strong authentication, malware protection, data protection, identity assurance, and threat detection and response. In addition, the powerful HP ZBook 17 G4 can be configured to visualize work in virtual reality (VR).

In addition to the new security features, the G4 line offers a range of capabilities and form factors.

HP ZBook 17 G4. The most powerful of the new line-up, the new ZBook 17 is equipped with a choice of Intel Xeon or Core processors, NVIDIA Quadro or AMD Radeon Pro graphics, up to 4 TB of storage, dual Thunderbolt 3 ports, and more. It can be configured with optimal horsepower and graphics cards to support a 90-FPS VR experience. It is available now ($1,519+).

HP ZBook 15 G4. A practical workhorse, the new ZBook 15 also offers a choice of Intel Xeon or Core processors, NVIDIA Quadro or AMD Radeon Pro graphics, and up to 3 TB storage for demanding design and engineering work. It is available now ($1,419).

HP ZBook 14u G4. HP’s smallest and lightest mobile workstation, this new Ultrabook is just 0.87” thick and weighs as little as 3.61 lb. It includes a 14” diagonal FHD display with optional touch, AMD FirePro graphics with 2 GB of video memory, Intel Core processors, up to 32 GB memory, and up to 2 TB of storage. The ZBook 14u G4 follows in the footsteps of its 15” cousin, the HP ZBook 15u, announced in January. HP ZBook 14u pricing and availability will be announced this summer. 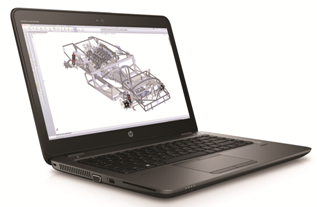 The HP ZBook 14u is the company’s smallest and lightest professional workstation.

HP’s “most affordable DreamColor Display ($559),” the 24” HP Z24x G2 produces up to a billion colors from wide color gamuts for color-critical applications. It offers push-button color space selection; calibration software for Microsoft Windows and  Mac OS; a 178-degree viewing angle; and height, pivot, swivel, and tilt adjustments. It is slated for release in early July.

Entering a new category in the display market, HP also introduced the 31” HP Z31x DreamColor Studio Display ($3,999) for elite film and animation studios, to be released later this year.