Less can be better with hardware that consumes less space, less energy, and less of your budget.


Spring is well under way in southern California, where balmy temperatures lure surfers into the water while northerners are still huddled indoors. Eager beachgoers and blooming flowers weren't the only signs of the season visible in Santa Monica last week, however. Hardware giant HP gathered journalists from around the world to unveil two newly hatched workstations and processor enhancements for its existing models.

Company executives displayed confidence about HP's workstation product line and position in the market. Jim Zafarana, vice-president and general manager of the Workstations Global Business Unit, proclaimed that during the "economic firestorm" of 2009, "HP not only survived, but thrived," surpassing Dell for the top spot in desktop, mobile, and total workstation market share. Jeff Wood, director of worldwide marketing, Workstations Global Business Unit, called 2009 "a phenomenal year from a workstation perspective."

If it seems surprising that some companies are making substantial hardware investments despite the current economy, perhaps they believe, as Zafarana does, that "there will be winners and losers ... winners will rearchitect for multicore first." Certainly the move from 2D to 3D, and from 32-bit to 64-bit processing, are demands that will encourage some AEC firms to upgrade their hardware sooner rather than later.

During this event, HP took the opportunity to highlight applications where superior computing power has yielded superior business positioning. For example, Philip Ra, senior designer at the Yazdani Studio of Cannon Design, described a challenging project with a very short time frame: Yazdani designed a villa for an emerging arts district in Inner Mongolia in just two weeks. "Using the computer in an efficient manner," said Ra, "allowed us to have a competitive advantage."

HP's Z workstation family welcomed the addition of a baby brother, the Z200 SFF (small form factor). This pip-squeak is almost one-third the size of the Z200 mini-tower, which was the smallest of the group when it was released in January. (For more on the Z200, read Ron LaFon's review in the Spring 2010 issue of Cadalyst magazine.)

At 3.95” x 13.3” x 15”, the Z200 SFF is small enough to be used on the desktop (and it also features the smallest price in HP's workstation lineup, starting at $739). Customer panel participant Matt Chow, a software engineer at Agilent, noted that the workstation's petite footprint would allow room for dual monitors and would be especially well suited to offices where space is at a premium, such as in Japan.

Configuration options for the Z200 SFF include dual- or quad-core processors, up to 16 GB of ECC (error-correction codes) memory, up to 2 TB of high-speed storage, a FireWire 1394a card, and 2D and 3D graphics options. A "tool-less chassis" means that the box can quickly be stripped of its housing by human hands alone, and the internal components swing out of the case for easy access to the interior. 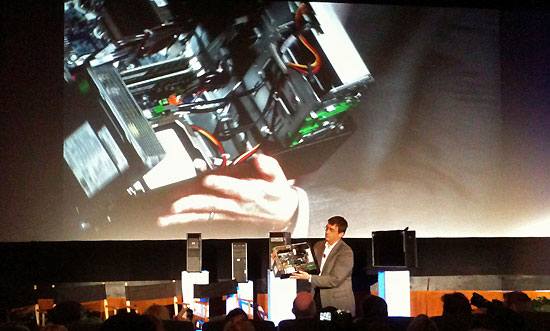 Terry Pilsner, vice-president of research and development for the Workstation Global Business Unit, demonstrates how the interior components of the Z200 SFF can be accessed without tools.

In keeping with HP's environmental initiatives, this micro-machine incorporates an 89% efficient power supply and a PCB-free motherboard, and offers ENERGY STAR 5.0–qualified configurations. All members of the Z family are registered as EPEAT (Electronics Products Environmental Assessment Tool) Gold and are at least 90% recyclable by weight.

As of last fall, all HP workstations ship with HP SkyRoom videoconferencing and collaboration software. HP Performance Advisor software, which automatically finds appropriate drivers and configures the system based on the user's workflow, is also preinstalled. "It's like having your own HP engineer in a box," said Zafarana.

Upgrade inside. The Z200's older siblings — the Z400, Z600, and Z800 — will now be available with Intel's "Westmere" 32nm Xeon 5600 series processors, offering up to 12 cores. When using two six-core processors and Intel Hyper-Threading technology, which enables thread-level parallelism on each processor, the Westmere units allow up to 24 threads to run at one time.

Thor Sewell, director of workstation business strategy for Intel, observed that processor enhancements have made "a lot of performance available at the fingertips of workstation users." Between 1998 and 2010, he explained, there has been an increase in graphics bandwidth of up to 60 times, in processing speed of up to 171 times, and in memory capacity of up to 192 times. Advancements like these have provided measurable benefits for simulation engineering; now, one person can perform multiple tests simultaneously.

The smaller-is-better theme was carried through to the EliteBook 8740w ($1,999 and up), which combines the functionality of a workstation with the mobility of a laptop. HP claims that at 7.8 lbs, this unit is nearly a pound lighter than competitive models. The 8740w is no lightweight, however, when it comes to its other specs: support for up to 16 GB of memory, USB 3.0, and a range of Intel processor options including the Core i7 Extreme Edition. 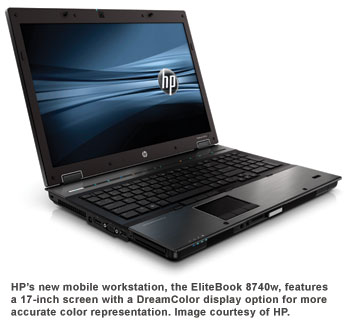 Although HP made much ado about the mobile unit's metallic-gray finish, the notable color news lies in the redesigned DreamColor display option, which can produce more than 1 billion active colors. The technology ensures that on-screen colors accurately represent what will appear on printouts, and enables viewers to see the screen clearly from multiple angles. A side-by-side comparison proved that the colors are also markedly more vivid than those on a standard HP mobile display.

The 8740w is not the first notebook HP has released this year, and it's sure to have successors soon. Efrain Rovira, director, Mobile Workstations, Notebook Business Unit, told the media that there is a growing movement toward mobility throughout the PC industry worldwide. "There's definitely a strong trend, momentum, and we think it is going to continue."

Tools of the Trade

HP went to great lengths at this event not only to demonstrate the hardware, but to showcase how companies are making use of it — from DreamWorks Studios' production of 3D, digitally animated feature films to Luczo Dragon Racing, which performs lap simulations to optimize a racecar's performance before it ever reaches the track.

For DreamWorks Studios to create an animated movie like How to Train Your Dragon, the various visual components — such as facial expressions, body movement, hair, and clothing — must be crafted separately. According to the filmmaker, however, the increasing power of workstations is gradually reversing the "decomposition" of the process, enabling animated films to be created more like traditional films. Image courtesy of DreamWorks Studios. 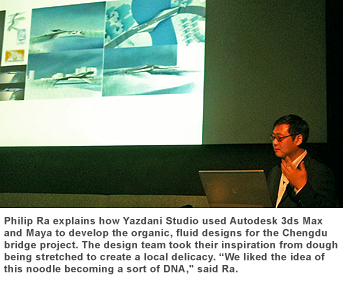 Yazdani Studio's Philip Ra discussed the designers' use of HP workstations to run not only architectural programs, but also what Ra called "software not meant for our industry," such as Autodesk Mudbox for 3D animation. Ra explained how the firm employed Autodesk 3ds Max and Maya to develop organic forms for bridges in Chengdu, China, and demonstrated how he could fly around the 3D model of a bridge in real time, examining the design from any angle.

Ra stressed the importance of thorough architectural design exploration, and of having access to a variety of tools — drawings, 3D-printed and traditionally built physical models, and digital models — throughout the design process. He emphasized the value of 3D printing in visualizing a variety of design alternatives in a limited amount of time. "By the end of the day, we could have 20, 30 different models ... and we could see the ones that really work and the ones that didn't work," he said. "Unless we try and test everything, we don't know what our boundaries are."