HP Z1 Breaks Out of the Workstation Mold

The industry's first 27" all-in-one workstation features pop-open access and a slew of options in a streamlined, space-saving package.


Last year, HP added a smaller form factor to its workstation line with the Z210 SFF. Although it was 65% smaller than its full-size sibling, the Z210 CMT, it was still a rectangular box. But this week, the hardware giant unveiled a new form factor that's a radical departure from its traditional towers: the HP Z1 all-in-one professional workstation. Although its internal configuration is similar to the Z210, its exterior is not — the Z1's display and computer are wedded in a single unit that sits atop a hinged, adjustable stand. "It's a game-changer," said Tom Salomone, worldwide marketing manager for HP.

The Z1 takes a cue from Apple’s iMac design, but pushes the computing power to a level that will support CAD professionals: The ISV-certified machine is built around quad-core Intel Xeon processors, NVIDIA Quadro graphics, and ECC (error-correcting code) memory. "First and foremost, we thought about the CAD environment," said Josh Peterson, HP's director of worlwide product marketing, Commercial Solutions. Peterson went on to explain that the Z1 is well suited to mechanical engineering, architectural, and civil and structural engineering uses. 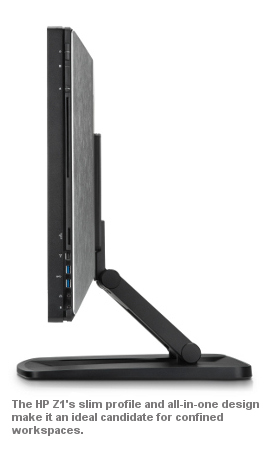 The Z1's compact, streamlined design is ideal for tight workspaces including home offices and cubicles; it can even be mounted on a wall, with the addition of a VESA-mount display arm. In addition, the all-in-one design and wireless keyboard and mouse do away with cord chaos. "All that clutter hampers productivity — it hampers creativity," said Peterson. "We felt the all-in-one form factor could really change the way people work and operate."

Productivity is king, but appearances also matter to workstation users, especially those architects and engineers who are judged on their aesthetic sensibility. "They're in the business of designing things and making them look good, so they want a workspace that makes them look good," explained Autodesk Senior Vice-President and Chief Marketing Officer Chris Bradshaw. In addition to reducing visual clutter, the Z1 sports a shell of brushed aluminum and edge-to-edge glass that's intended to complement those environments.

The system is designed to be unobtrusive to the ear, as well as the eye. Nine thermal sensors monitor four independent cooling zones, keeping the six fans from operating unneccessarily. "It needs to be whisper-quiet — this is a foot away from your head," noted Jeff Brown, vice-president and general manager of NVIDIA's Professional Solutions group.

The Z1's design is also proof of HP's ongoing efforts to provide tool-less access to workstation internals. Users can recline the machine to a horizontal position, lock the stand, and lift the display up on hinges, as if they were opening a briefcase. This clamshell design allows users to access the Z1's internals without rummaging for a screwdriver. Once inside, users can remove the graphics card module, hard drive, and other components with finger-operated releases. Touchpoints are marked in green for quick identification. When it's time to close the unit back up, a shock absorber eases the two halves back together. 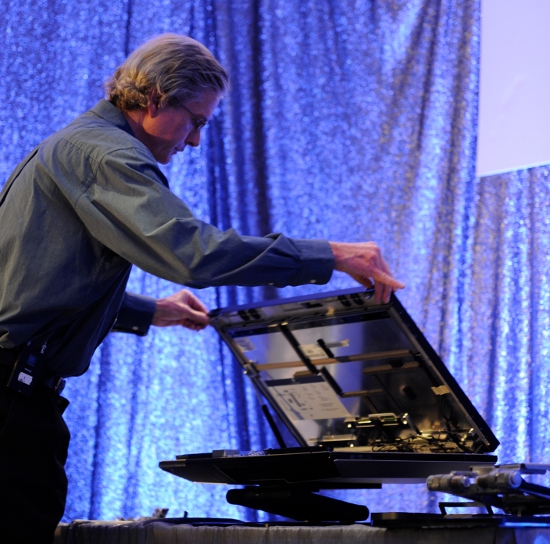 No Compromises Under the Hood

When HP ran the all-in-one concept by members of its customer advisory councils, the response was less than enthusiastic, Peterson reported; experience with other iterations of the form factor had left them nonplussed. "They had them in their environment reluctantly, almost," he continued. According to Ron Rogers, HP's senior director of commercial solutions product development, Commercial Solutions, other companies' all-in-ones tended to compromise on performance or noise, and were nearly all factory-configured. 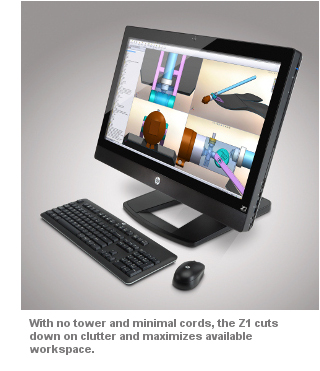 HP stressed that the Z1, in contrast, offers "workstation performance without compromise." That performance is rooted in professional-level components, many of which are customizable. Complete specifications for the Z1 are available on HP's web site, but the highlights are:

This Z1 video from HP demonstrates how the all-in-one unit tilts, folds, and opens, revealing the modular components that can be removed without tools.

Development of the HP Z1 began just two years ago, and is expected to begin shipping worldwide in April. “It was an amazingly focused and short development process,” said Travis Humphries, global product manager for HP. The Z1 starts at $1,899 (with integrated Intel graphics) in the United States, and comes with a standard three-year warranty.