First Look Review: Distinctive all-in-one system has it all — and it all fits inside a 27" display.

The HP Z1 is a desktop workstation that provides familiar capabilities in an unfamiliar package: Its stunning display houses the entire system. Plug in the power cord, insert the USB dongle for the wireless keyboard and mouse, and you are ready to get to work. If your office has wi-fi, you don't even need to attach a network cable. If you are tight on desk space, you can attach the HP Z1 to your wall using a standard VESA mount. This is definitely not an ordinary workstation.

The first thing I noticed about the HP Z1 was its brilliant display. At 27" (measured diagonally), this IPS (in-plane switching) LED-backlit LCD panel, which supports a maximum resolution of 2,560 x 1,440 with 32-bit color, should meet the needs of virtually any CAD operator. Pixel for pixel, this 16:9 aspect ratio display supplies nearly three times the real estate of a 1,280 x 1,024 screen, which is the standard we use when performance-testing workstations with the Cadalyst Systems Benchmark. Size isn't the only thing worth mentioning — the quality of the displayed image is, in a word, superb. 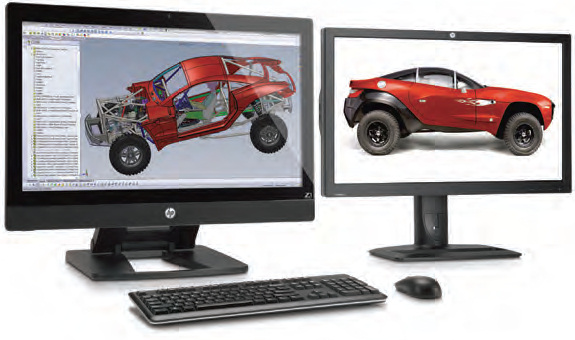 The HP Z1, with all components integrated inside the monitor, can accommodate one additional monitor for extra screen real estate.

The HP Z1 measures 26" wide by 17¾" high by a mere 3" deep (excluding its stand). And, yes, the entire system fits within the confines of that one case. However, the real surprise comes when you lower the display to a horizontal position and pop open the hood, gaining instant access to system components. You can easily upgrade or service the system memory, hard-drive storage, graphics card, and optical drive. In addition, there are four user-accessible expansion slots: one PCIe 2.0 x16 slot (filled with the graphics card) and three mini-PCIe 2.0 x1 slots (one filled with a dual-band wi-fi plus Bluetooth wireless adapter).

The HP Z1 supports one 3.5" or two 2.5" internal hard drives, and RAID options are available. Our system included a pair of 300-GB Intel SATA solid-state drives, offering 600 GB of very fast hard-drive storage. You can maximize your storage with an optional 3.5" 2.0-TB SATA 7200 drive. A Blu-ray DVD+/-RW slot-loaded optical drive/writer is ideal for multi­media projects, and there's an integrated HD webcam, with tilt control, supports video at a maximum resolution of 1,920 x 1,080 at 30 fps.

For the graphics subsystem of our HP Z1, we chose NVIDIA's high-end Quadro 4000M graphics controller, loaded with 2.0 GB GDDR5 memory. (HP designed the Z1 to accommodate a mobile graphics card in the interest of making the most efficient use of space and minimizing acoustic levels in the all-in-one system.) For those who cannot get enough screen space, a Display Port in/out connector allows for one external monitor. Other external ports include two USB 3.0 ports, four USB 2.0 ports, IEEE 1394a port, standard network connector, 4-in-1 media card reader, microphone and headphone jacks, optical SPDIF audio-out connector, and subwoofer jack. The system also has five internal USB 2.0 ports.

The HP Z1 incorporates four independent cooling zones, which are monitored by nine thermal sensors and cooled by six variable-speed fans. Occasionally, I could detect a trivial hum as the fans kicked in during our demanding benchmark testing, but noise was never a concern. Other features include a generous 400-W (90% energy efficient) power supply, SRS Premium Sound technology, and a pair of dual-cone front-facing stereo speakers.

On the software side, the HP Z1 includes the HP Performance Advisor. This user-friendly utility helps you optimize, customize, and, when necessary, troubleshoot your workstation. It provides real-time information about memory and CPU activity and keeps you updated about the latest certified drivers for your system components.

We measured the HP Z1's performance using the Cadalyst c2012 with AutoCAD 2012 and SPECviewperf 11 benchmark tests. Our operating system was Microsoft Windows 7 Professional 64-bit. For those referencing previous reviews, we also include test scores for Cadalyst c2011 with AutoCAD 2011 and NVIDIA's performance driver. (NVIDIA ended its enhanced support for AutoCAD with version 2011.) As usual, we ran all tests at a screen resolution of 1,280 x 1,024 with a 32-bit color depth. We enabled hardware acceleration for AutoCAD and turned off vertical sync for the graphics card.

Running our c2012 benchmark and AutoCAD 2012 with its native driver, the results were as follows: total index of 470; 3D graphics index of 909; 2D graphics index of 401; disk index of 264; and CPU index of 305. This being only the second time we've run this combination of Cadalyst benchmark and AutoCAD, a direct comparison is limited to a single workstation, which was equipped with an NVIDIA Quadro 4000 graphics card and an overclocked CPU running at 4.5 GHz. The HP Z1's total c2012 score was 14% slower — which is pretty good, considering the competition had nearly a 30% advantage in raw CPU speed.

Finally, for the record, running c2011 with AutoCAD 2011 and the NVIDIA enhanced driver, the scores were as follows: total index of 1,214; 3D graphics index of 3,914; 2D graphics index of 385; disk index of 248; and CPU index of 308. These scores compare very favorably against other workstations equipped with a similar CPU.

The HP Z1 is a powerful workstation, which comes at a price. Our review unit, which can only be described as fully loaded, was priced at $5,673 (including the stunning 27" display). Visit HP's web site to price a custom configuration to your exact requirements — prices start at $1,899. In any case, don't forget HP's three-year limited warranty for parts and labor, with next-business-day on-site service available Monday through Friday, 9 a.m. to 5 p.m., as well as phone support available around the clock. Highly Recommended.