These days if you're able to invest in new technology at all, you probably want to ensure you get the most possible for the money. So you might be very interested to hear about HP's new professional workstation, the HP Z200, which began shipping in February. We put this entry-level system to the test in Cadalyst Labs and found it delivers an excellent price-to-performance ratio — that is, lots of bang for the buck. At a starting price of only $769, the Z200 can efficiently run AutoCAD, Adobe Photoshop, or power office applications, and for a slightly greater investment, it can do a lot more.

Good things come in small packages — or so the saying goes. That's certainly true of the new HP Z200 workstation. Measuring 17.7" x 7" x 17.9", this desktop system may be compact, but it packs enough horsepower to make it a viable choice for CAD and engineering firms.

The HP Z200 offers workstation-caliber power and productivity at a starting price that rivals those of traditional desktop computers.

The HP Z200 I tested was based on an Intel Core i5-650 3.2-GHz dual-core processor with 4 MB of internal cache on a motherboard using an Intel 3450 chipset. Various processors are available, but the system I tested was equipped with the dual-core processor offering a faster clock speed. HP's investment in acoustic engineering is evident in what you can't hear — this system is one of the quietest ever to come through Cadalyst Labs. 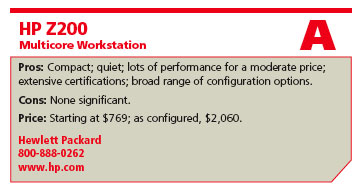 I tested the HP Z200 with 4 GB of 1,333-MHz DDR3 ECC RAM, but it can accommodate as much as 16 GB when fully populated. A single 250-GB SATA 7,200-rpm drive was installed; configurations with multiple hard drives and more than 1 TB of capacity are available. A 16x DVD±RW SuperMulti SATA optical drive completed the drive inventory for this particular system. Microsoft Windows XP x64 with Service Pack 2 was preinstalled.

System graphics were powered by the NVIDIA Quadro FX 1800 PCIe graphics card. Other models from NVIDIA and ATI are available.

The Z200 has many connectors for external and internal peripherals. On the front of the system are two USB 2x sockets, a spot for the optional IEEE 1394a connector, and microphone and headphone jacks. On the back are six USB 2x connectors and serial and VID-D dual-link ports. One DisplayPort connector is available with an optional PCI card. The workstation also has three internal USB 2x connectors, which are ideal for accommodating the critical hardware dongles required by some high-end software.

The review unit included the optional 22-in-1 media card reader, which provided an additional USB 2x port in the front of the system, as well as an installed IEEE 1394a port on the front of the case. A standard HP USB keyboard and an HP USB scroll mouse rounded out the package.

Among numerous green features of the Z200 are the 320-W 89% power supply and HP WattSaver technology, which consumes less than 1 W in Off mode when activated. The HP Z200 is ENERGY STAR v5.0 qualified.

Included with the HP Z200 workstation was the new and noteworthy HP Performance Advisor software. Designed for nontechnical users, this tool helps keep workstations operating at optimal performance by maintaining drivers, operating systems, and applications. Formerly called the HP Performance Tuning Framework, it ships on all new HP workstations and is available via free download from the HP web site. The workstation I reviewed also included a trial version of HP SkyRoom visual collaboration software, which allows two to four users to work interactively across the world with real-time 3D graphics sharing and HD2 videoconferencing.

I began testing the HP Z200 using the Cadalyst C2010 v5.3 Benchmark Test, which supports 32- and 64-bit versions of Windows. I tested the HP Z200 under the 64-bit version of Microsoft Windows XP x64 with Service Pack 2 and other updates installed.

Next, I ran SPECviewperf 10, which evaluates how various CAD and other design applications will perform within a given system configuration. This benchmark is long overdue for updating and has some problems with Windows 7, so I'm currently testing workstations with Microsoft Windows XP or Vista installed. Although the newer processors offer an array of settings that can boost system performance, I'm opting to test using the default system configuration provided for review by the manufacturer.

Cadalyst normally runs a third benchmark test to evaluate how a system performs with Autodesk 3ds Max. However, no benchmark currently exists that incorporates many of the latest 3ds Max features. So I've suspended this portion of workstation testing until completion of the new SPECapc benchmark for 3ds Max, which I'm told is in the works.

Graphics for the HP Z200 were provided by an NVIDIA Quadro FX 1800, a moderately priced graphics card with upper mid-range performance. I used the preinstalled NVIDIA drivers v6.14.11.9156, dated October 1, 2009. I also used the NVIDIA accelerated driver for AutoCAD 2010; it is available as standalone download. Before testing, I set the drivers to Force Off and minimized various background processes.

Benchmark performance for this HP Z200 was very good overall. According to HP, this system is approximately 20% faster on average than the highly rated HP xw4600, which the Z200 replaces in the HP workstation lineup.

Pricing for the HP Z200 workstation as configured for this review was $2,060, excluding a monitor. HP's limited warranty coverage for the Z200 is three years for labor, parts, and next–business day on site service. Extended warranty plans are available; warranty parts replacement is next–business day delivery. HP offers a 30-day Dead on Arrival return policy, with a standard repair process thereafter. A one-year limited warranty is available in some portions of the Asia-Pacific.

Considering its extremely quiet operation, extensive configuration options, and high performance — as well as its great depth of application certifications and its excellent finish — the HP Z200 has a lot going for it. You could find systems offering more power, but if what you want is good value, the Z200 is certainly worth your consideration. It offers a lot of system now plus room for growth. Highly Recommended.