Intel’s Optane Comes to CAD Workstations — for a Price

Herrera on Hardware: It’s not cheap yet, but Optane technology improves performance on several fronts, especially for high-demand storage solutions.

But what Optane strives to achieve in datacenter applications can translate elsewhere, and workstation applications are in its crosshairs as well. An extremely disruptive departure from conventional storage technologies, 3D XPoint/Optane has justifiably taken time to bootstrap itself into a practical choice — specifically an economically practical choice — but it’s making progress in datacenter markets. And now, it’s becoming an option for CAD users, with availability in workstations from vendors like HP.

Optane is still a relatively expensive proposition, but it’s a proven technology with compelling advantages, and given that Intel has its full weight behind Optane, it’s likely to become steadily more practical over time. Add that all up, and it’s a good time for CAD professionals to take a look at what Optane can offer.

The Recent, Rapid Rise of SSDs

In the past several years, SSDs have successfully permeated high-performance client computers, especially workstations used for demanding visual applications handling big datasets (think CAD, of course). And for good reason: The performance of the drive itself, combined with dramatic reductions in cost and improvements in supporting technologies such as PCI Express (PCIe) and NVM Express (NVMe), have turned it from a luxury upgrade to default configuration in short order.

The SSD market is, for all intents and purposes, a NAND flash market. The most common form of non-volatile random-access memory (NVRAM) technology, NAND flash offers a compelling blend of density and performance, with acceptable endurance. (In the world of memory, endurance refers to the ability to faithfully write and re-write the same locations many, many times — enough to last the life of your usage.)

No doubt, NAND flash technology can deservedly take credit for stoking markets that now ship in the billions of units and tens of billions of dollars. For more background on SSDs, the typical NAND technology, and the role of PCIe and NVMe in unlocking their benefits, see my column on “The Interface of Choice for SSDs.”

NAND Never Was the End-All Solution for NVRAM

Despite its market-transforming impact, however, NAND isn’t perfect. It has a few traits that present opportunities for improvement in throughput, latency, endurance, and density. So Intel, along with every other organization with a long-term stake in NVRAM, has been working for years on approaches that might offer a worthy alternative to NAND — if not as a replacement, then at least as a complement.

Unlike the conventional, tried-and-true CMOS technologies that NAND relied upon, however, replacement approaches were based more on unproven and radical departures from the norm, and there were no guarantees that heading down a particular path would ever yield success. Still, the stakes are high enough that anyone with the wherewithal to spend the time and money had no choice but to invest — and eventually, to make a bet on which path to take. For Intel, that seemed to arrive at a specific technology, one that evolved into a joint development with Micron and was given the brand name 3D XPoint in 2015.

3D XPoint, the Foundation of a New Generation of SSDs

So what exactly is 3D XPoint memory technology? For obvious reasons, Intel isn’t about to go overboard on details, but it has provided both higher-level views and real-world testing data to substantiate the value of 3D XPoint. Worth noting are two key attributes that highlight why it represents such a dramatic departure in technology: First, no transistors of any type are involved in storage (unlike NAND). And second, it appears to exploit physics at the atomic level, relying on quantum characteristics like electron spin to set different persistent states for a subsequently detectable property, for example, resistance. Setting individual memory cells to persistent, read-distinguishable resistive states is at the crux of 3D XPoint’s approach.

Physically, 3D XPoint memory is composed of a physical structure of row and word lines, selectors, and cells. Row and word lines are orthogonal and run exclusively in metal, allowing a higher frequency of operation versus higher-impedance polysilicon of typical bulk transistor approaches. An intersection of an active row and word addresses a cell, and that cell’s selector either writes or reads the cell depending on the voltage it applies. If reading, sensing the current then determines the state the cell is in. 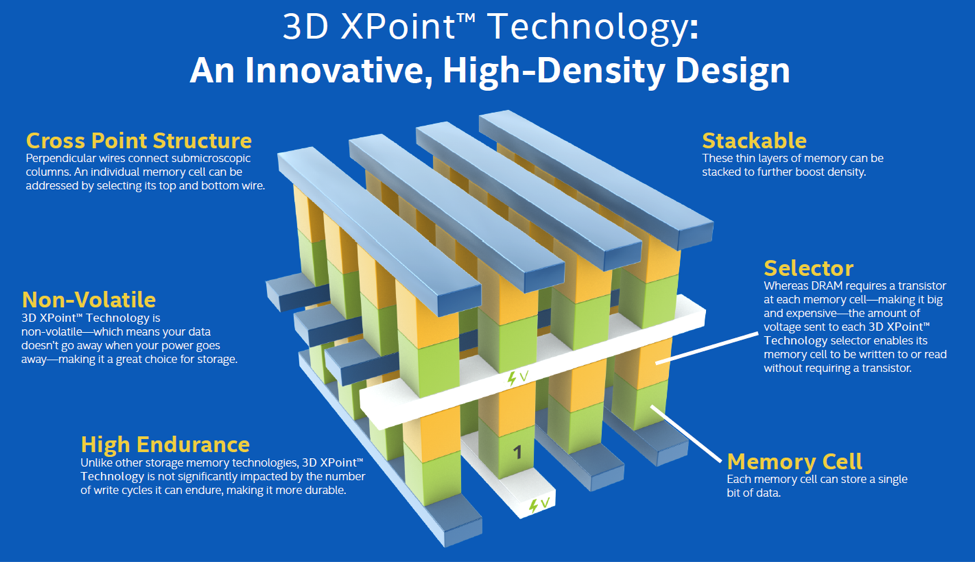 The structure of the 3D XPoint NVRAM array. Image courtesy of Intel.

With 3D XPoint, Intel achieves a few advantages over NAND technology. Start with performance, where Optane can claim superiority in two key storage metrics: latency and quality of service (QoS). Read latency (the delay from request of data to receipt) is dramatically reduced, with Intel claiming up to 4X performance improvement for “workstation application storage performance.” That effectively translates to a 4X improvement on the storage component metric for SPECwpc, SPEC’s holistic workstation performance benchmark (one I like and use as a workstation evaluation baseline).

Now, 4X doesn't mean overall system performance can hit that multiple every time (or even often), but it can max out at that number under the right I/O bottlenecked conditions. Furthermore, performance is more predictable with latency under tighter tolerances than NAND. The nature of NAND (and other conventional data storage approaches) means that latency will vary as a function of access parameters. Data could come back very quickly or more slowly, making reference of a quality of service (QoS) measure relevant when talking about performance.

As a metric, it states that response time will be guaranteed within a certain time for some statistical measure. For the Optane SSD DC P4800X, for example, Intel is touting 60 times better performance at 99% QoS (4K workload at 70/30 read/write on identically equipped server) than its comparable NAND-based option. That means the former can guarantee that 99% of reads will occur in one-sixtieth the time that the latter can guarantee the same — a huge disparity and, again for some applications and datacenters, may represent a critical design-in criterion. And that performance holds under tougher (and more esoteric) metrics like low-queue depth and responsiveness under load. (The former essentially means it can deliver high performance even when there’s not a lot of requests ganged up to boost efficiency, and the latter that it can deliver even when busy with a heavy mix of requests.)