The Interface of Choice for SSDs

Herrera on Hardware: PCI Express provides a much higher-capacity path to storage drives than SATA does.


There's a new disk drive game in town. Until recently, the main decision a buyer of a new CAD workstation needed to consider was whether to stick with tried-and-true hard disk drives (HDDs) or fork over more dollars to get less capacity, but substantially higher performance, in a solid-state drive (SSD). The SSD's advantages have been widely accepted and are well understood, and the decision boiled down to whether those advantages were worth the tradeoffs.

Today, however, buyers have another choice to make — one that can make the option of choosing an SSD over an HDD that much more attractive. PCI Express SSDs are here, and they're begging the attention of the most demanding computing professionals, many of whom are plying their trade in CAD.

Unlike an HDD, which features a mechanical head that moves back and forth across the radius of the platter to read bits (in the form of magnetic state), the SSD has no mechanical parts. Rather, it stores data in non-volatile random access memory (NVRAM) chips, including today's common NAND flash type, rather on the individual magnetic platters of an HDD. 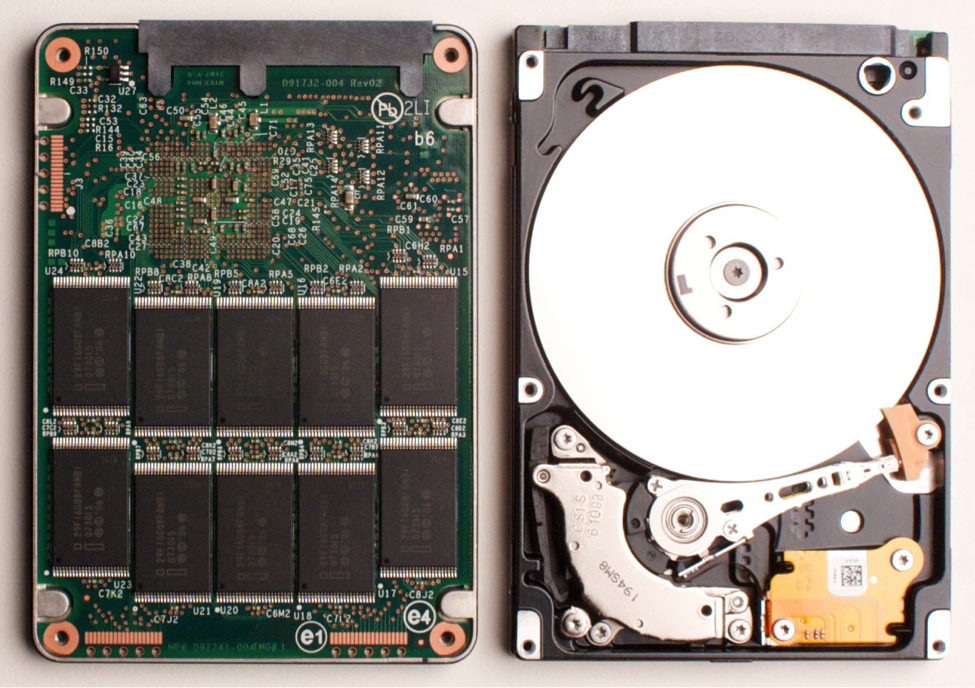 An SSD (left) compared to an HDD: semiconductor chips versus spinning, magnetic platters and read heads. Image courtesy of Intel.


The advantages of HDDs over SSDs have historically numbered two: lower price and higher capacity. However, as NVRAM chip densities have improved over time, so has SSDs' economy. Today, SSDs are large enough to be useful, and although still significantly more expensive than HDDs, have come down enough in price to merit serious consideration by anyone outfitting a new workstation for CAD use. And without the motor and moving parts of HDDs, SSDs are quieter, can use less power, and are more reliable in the face of impact or vibration.

More than anything else, however, the SSD's most appealing trait is its superior performance. SSDs present avenues to dramatically improve a storage system's two most critical metrics: peak bandwidth and read latency.

Today, an appropriately designed array of NVRAM chips can sustain a transfer rate far in excess of an HDD with constrained RPMs. And with no spinning platters and read heads, for example, the SSD can dramatically cut read latency — the time that elapses between asking the drive for data and receiving it. There's no waiting for the HDD's spin-up time (at power-on or coming off a standby mode) or seek time, which the head requires to travel the physical distance to a new location on the platter. And that makes the SSD theoretically capable of outperforming HDDs by a wide margin in both bandwidth and read latency.

What's with the "theoretically" disclaimer? Don't these advantages already exist? Yes, but only to a degree. It turns out that the SSDs that ship alongside HDDs in today's computers are handcuffed in performance, limited not by the capabilities of the NVRAM chip array inside, but by the interconnect that carries the data back and forth to the system's CPU and memory.

The vast majority of SSDs shipped to date have come installed in computers' SATA drive bays, which are designed for HDDs and connected to the motherboard via a serial cable whose signaling and data rates are governed by the Serial ATA (SATA) standard. Though it's a clean and capable interface to support an HDD's lower performance, today's pervasive SATA revision (3.0) can't keep up with the rates an SSD can deliver. Tying a screaming-fast SSD to performance-throttled SATA is like driving a Lamborghini and never leaving the slow lane.

Of course, where there's an obvious system bottleneck, you can bet that engineers will be working to eliminate it. And that leads us to a relatively new choice in storage options: PCI Express SSDs. PCI Express (PCIe) is a standard that was specifically engineered to support bandwidth-hungry I/O devices, the most common examples of which are graphics processing unit (GPU) add-in cards. Where today's SATA interface maxes out at 600 MB/second (peak rate), today's PCIe Gen2 (second generation) slots can provide between 1.0 and 2.0 GB/second, depending on whether the slot supports two or four PCIe lanes (where each PCIe lane can send and receive one data bit per cycle). 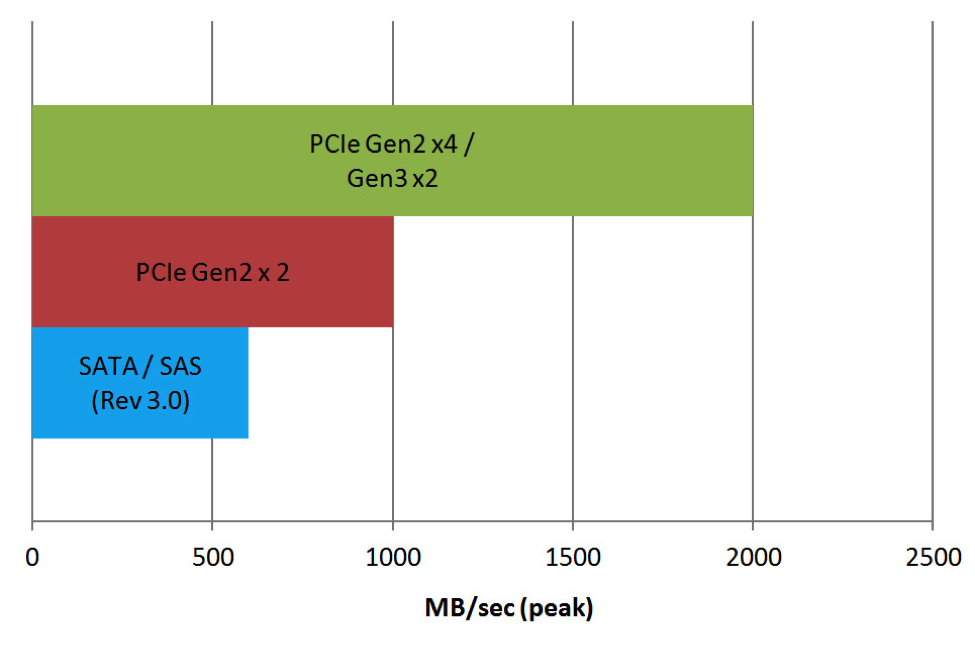 PCI Express provides a much higher-capacity path to storage drives.