This week Lenovo announced the ThinkStation P900, P700, and P500 desktop workstations, rounding out the P Series that was launched in May with the entry-level ThinkStation P300. The P Series workstations are designed for professionals in industries including engineering, architecture, and media and entertainment.

According to Cassidy Lammers, product reviews analyst for Lenovo, the company has "improved our storage and memory in the new line, both in terms of capacity and performance with more DIMMs and faster memory thanks to DDR4. In addition, all users will benefit from the flexibility to configure the system to their needs with our FLEX bays and truly tool-less components. We've also improved our thermal design, giving greater uptime and easy replacement of parts."

The workstations are built around Intel Xeon processors and NVIDIA Quadro graphics cards; the P900 model supports up to three K6000s, the most powerful of the NVIDIA Quadro line. "As data sets get larger and more complex, our customers need increasingly powerful, interactive performance," said Jeff Brown, vice-president and general manager, Professional Solutions Group, NVIDIA. "The P Series delivers this capability by utilizing the new generation of NVIDIA Quadro GPUs to ensure that users get the most out of their investments."

The new models feature a redesigned cooling system with a patented tri-channel architecture. A FLEX bay can support an optical drive or the FLEX Module, which can be used to support an ultraslim optical drive, a media card reader, or Firewire (IEEE 1394). Newly designed HDD trays support both 2.5" and 3.5" hard drives. And with one tray supporting up to two 2.5" hard drives, users can add as many as 14 drives (P900 model only). 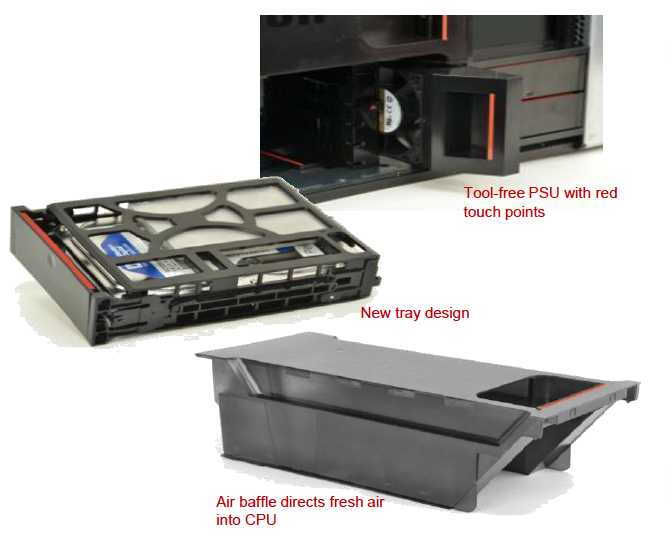 The new Lenovo ThinkStation P Series workstations will become available in late September through Lenovo business partners and on www.lenovo.com; the company will announce pricing closer to that time.