The ThinkStation P510 and P410 serve as stepping stones for customers looking to move up in the workstation world — or to enter it for the first time.

The P310 replaces the P300 and is available in a full-size tower or a small form factor (SFF) version. Despite its PC-level price (starting at $729), the P310 is a professional-class, ISV-certified system, affirmed Hector Guevarez, manager of the ThinkStation Product Management Team at Lenovo.

Because it’s a “flat transition point from a pricing perspective,” Guevarez explained, the P310 can act as a gateway machine to bring PC-based professionals into the workstation world. “This price point is more palatable [than a top-end workstation that costs thousands of dollars] — you can digest this better,” he continued.

The P310 supports Intel Xeon E3 processors, expandable DDR4 memory, NVIDIA discrete graphics, and PCIe storage (SSD) — “it’s the most value we’ve ever done on an entry space [system] by far,” said Guevarez. Although both P310 form factors are based on the same motherboard, they offer different levels of scalability; the SFF chassis places some limitations on component options such as graphics processing units (GPUs) and power supplies.

The P310 launch was followed by the unveiling of the updated dual-processor ThinkStation P710 and P910, which replace the P700 and P900. These are the mainstream and high-end dual-processor members of the family, respectively; both support the new Intel Xeon E5-2600 v4 dual-processor configurations.

Rodrigo Mancilla, product manager of Lenovo’s Worldwide Workstations Business Unit, pointed out that although this cycle of updates is all internal (as opposed to a chassis design overhaul, for example), they are substantial: The processor upgrades provide “better price-to performance than the Haswell [generation of Intel processors]”; bigger, faster storage drives enable higher speeds without increasing costs; and a new Performance Tuner application available to all Lenovo customers maximizes workstation performance.

Unlike the other models, the P410 is not an update of an existing model, but a new addition to the ThinkStation family. The company has identified an unaddressed segment of the market, said Guevarez: “[customers who] are looking to move up to higher-performance systems, but they’re running into sticker shock when they look at the difference in price between entry and mainstream workstations.” The addition of the P410 meets their needs and “closes the cost gap between our entry space and our mainstream space,” Guevarez explained. 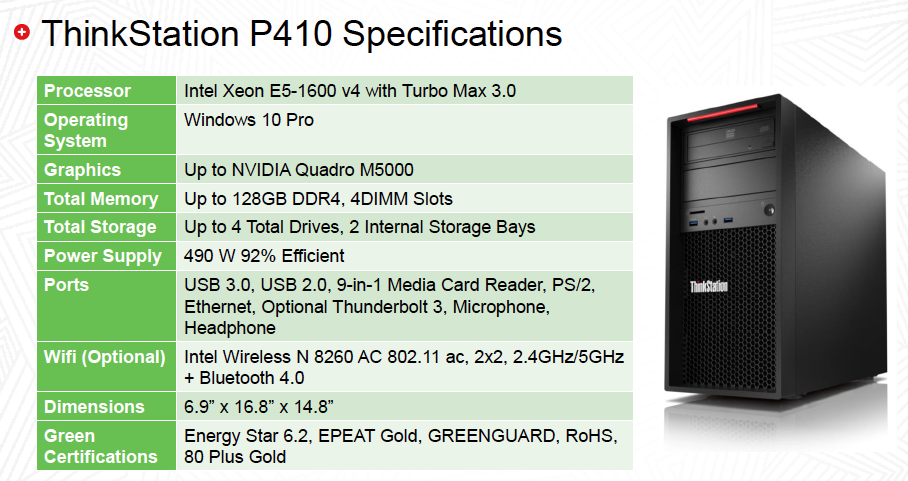 The P410 is targeted toward users who require higher levels of performance than their current hardware offers, but are constrained by their budget. Image courtesy of Lenovo.

The ThinkStation P510, which replaces the P500, is Lenovo’s mainstream, single-processor option. Like the P410, it also features Intel Xeon E5-1600 v4 processors with Intel Turbo Max 3.0 technology; unlike the P410, it offers interchangeable power supply options, explained Guevarez. It has a tool-less chassis design, supports the NVIDIA Quadro M6000 GPU, and boasts the most memory and storage capacity in its class, according to Lenovo. 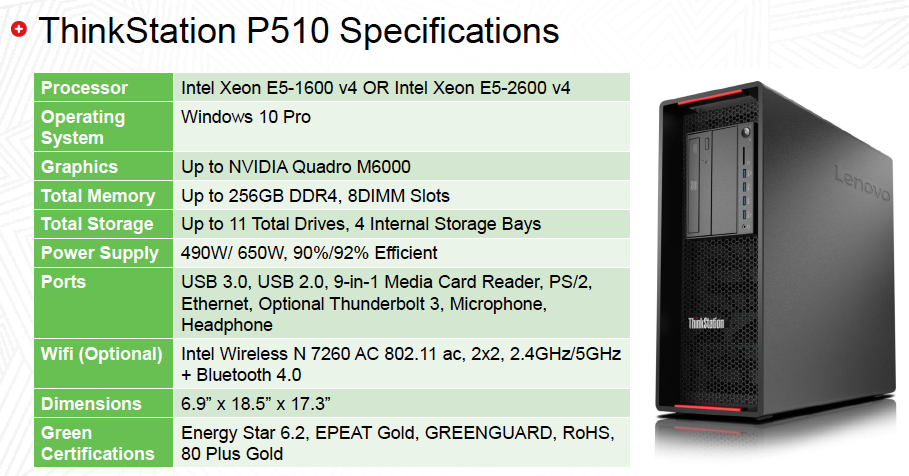 Lenovo also announced the launch of Lenovo Performance Tuner (LPT) performance optimization software (available for free download from Lenovo’s Support portal). LPT offers power management, resource monitoring and tuning, graphics management, and BIOS management. “We’re at a point in our business we can move past offering [only] hardware solutions,” said Guevarez. “We think that this tool differentiates ourselves from what else is out there in the market.” 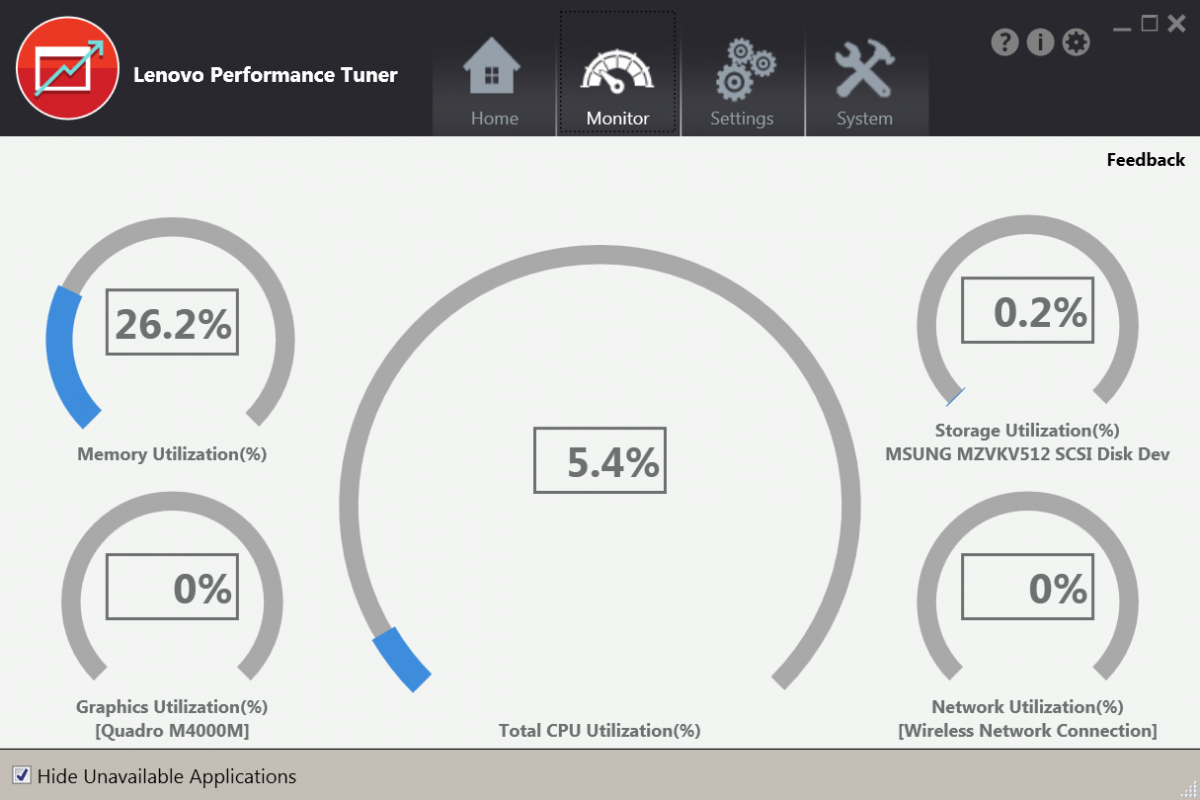 With the Processor Affinity feature, users can fine-tune their system’s workload by selecting which processor cores they want their software to run on. “Now you can allocate all the cores that you want to a particular application,” said Guevarez. 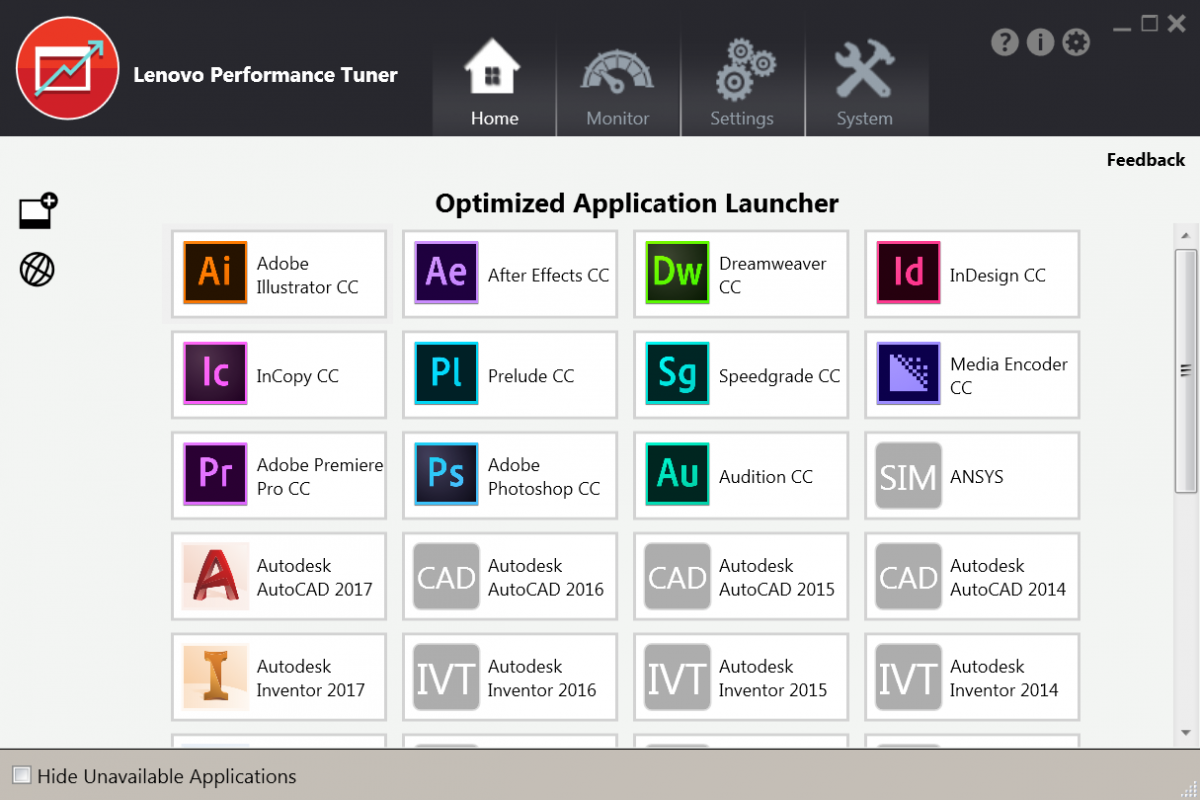 
Rob Herman, general manager of Lenovo’s Workstation Business Unit, explained in a blog post this week: “[When] running a single-threaded application, such as Dassault SolidWorks, on systems that have quad-core processors, Processor Affinity allows you to designate which core is used for that application, helping to better allocate resources for certain applications while others function freely on the other cores. This also is beneficial for multi-core applications, like ANSYS, which can be isolated to prevent it from consuming all of the system resources, allowing other applications to concurrently and smoothly execute on the same system.”

To adjust and manage resources, users can create profiles for different applications, and LPT also includes some predefined profiles that “will give optimal settings for [those] applications,” said Guevarez. Note that only one profile can determine resource allocation at a time, and the active profile remains such only as long as the application is running.