Editor's note: This article was originally published in the Summer 2010 issue of Cadalyst.

Lenovo offers a broad range of desktop and mobile workstations. For this review, Cadalyst Labs received a Lenovo ThinkPad W510 mobile workstation with an Intel i7-820XM 1.73-GHz processor that uses the QM57 Express Chipset (iAMT). The test system had 4 GB of PC3 1,333 MHz DDR3 RAM installed, but it could accommodate as much as 16 GB when the motherboard is fully populated.

Graphics were driven by an NVIDIA Quadro FX 880M graphics card with 1 GB of video memory. The display screen was a 15.6" full-HD color panel with a native resolution of 1,920 x 1,080 (16:9 aspect ratio), a 500:1 contrast rating, and 95% color gamut. Other display panels are available for the ThinkPad W510, as are numerous other configuration options.

Connectivity options — in addition to LAN, Wi-Fi, WAN, and Bluetooth — included two USB 3.0, one powered USB 2.0, one USB 2.0, and one eSATA combo port. It also had DisplayPort connections and one ExpressCard/34 slot, a 5-in-1 multicard reader, an IEEE 1354 FireWire 400 interface, and a modem.

Performance. To test the performance of the ThinkPad W510, I ran several iterations of the Cadalyst C2011 Benchmark (C2011) with the 64-bit version of AutoCAD 2011 and its applicable service packs and hot fixes. The Intel processor that powers this system has a Turbo mode that can be activated to balance performance, and it's also possible to assign either single or multiple processes to a single core in the processor. I opted to test the base configuration as received, but keep in mind that these options are available for fine-tuning system performance to individual needs. 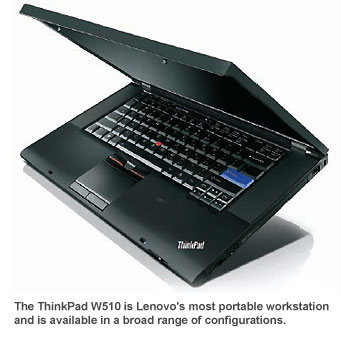 For the two battery tests on the Lenovo ThinkPad W510, I prepared the system by eliminating polling background services such as Bluetooth and Wi-Fi and adjusting the power settings to brightest screen and to never power-down the display or hard drives. For the idle component of the test, with no applications running, the system shut down in 2 hours, 52 minutes. With the 9-cell battery fully recharged, I set the Cadalyst C2011 benchmark to run multiple iterations, with no other input. Under these conditions, the system shut down in 55 minutes. These battery tests are not meant to mimic real-life use, but rather provide a range of performance you could expect.

Warranty and price. Lenovo offers a variety of warranty plans and extensions. As equipped for this review, the ThinkPad W510 was priced at $2,409. One notable upgrade ($70) not included on our review model is a color sensor that analyzes color emission of the display and calibrates it to maintain true color over the lifetime of the product.

The Lenovo ThinkPad W510 is a compact system that offers very good performance at a very reasonable price. I could quibble about wanting a larger screen and longer battery life, but those complaints take nothing away from this well-engineered system, which offers a great deal of performance for the price. Highly Recommended.