For professionals who like to get hands-on with their designs, this 28” all-in-one computer provides lots of space for sketching, modeling, and more.


Microsoft pushed tablets into new territory with its Surface Pro, which — in its latest iterations — is capable of handling full versions of Windows-based CAD applications. Now the company is introducing another take on touchscreen design tools: Surface Studio and Surface Dial. The Studio is part workstation, part “digital canvas,” boasting an ultra-HD 4.5K screen with 13.5 million pixels that interacts with the Surface Pen stylus, human fingertips, and the new Surface Dial input device.

In contrast to the Surface Pro, the Surface Studio isn’t meant to venture into the field — its 28” PixelSense Display is designed for visual exploration, not mobility. That doesn’t mean it’s limited to one position; hinged supports enable Surface Studio to transition from Desktop mode (perpendicular to the work surface) to Studio mode (a 20 degree angle, similar to a drafting board).

Hinged supports enable users to move the Surface Studio display between an upright position and a slanted work surface. Image courtesy of Microsoft.


The 28” display dwarfs the base of the Studio, which is an all-in-one configuration without a separate tower unit. The small case houses a sixth-generation Intel Core processor and an NVIDIA GeForce graphics processing unit (GPU). Although GeForce more typically used in gaming computers than CAD workstations, the Studio can reportedly handle 3D CAD programs such as Siemens NX. Microsoft envisions the Studio supporting “end-to-end” workflows encompassing sketching ideas, creating models, and reviewing and marking up designs.

“It’s a new way to create, it’s a new way to produce, it’s absolutely a new way to work,” said Panos Panay, corporate vice-president, Microsoft Devices. “The idea behind it is we want you to be able to move effortlessly between those perspectives of drawing, drafting, up to typing, back through, so you can move through your motions and nothing gets in your way.”

Some of those tasks can benefit from two-handed interaction with the touchscreen, made possible with the Surface Dial input device. The Dial can be used on the desktop, where it provides an additional way to scroll, zoom, and navigate. When placed directly on the Studio screen, however, the Dial also brings up tools specific to the application that is open, when available, and enables users to quickly cycle through menus and select options. 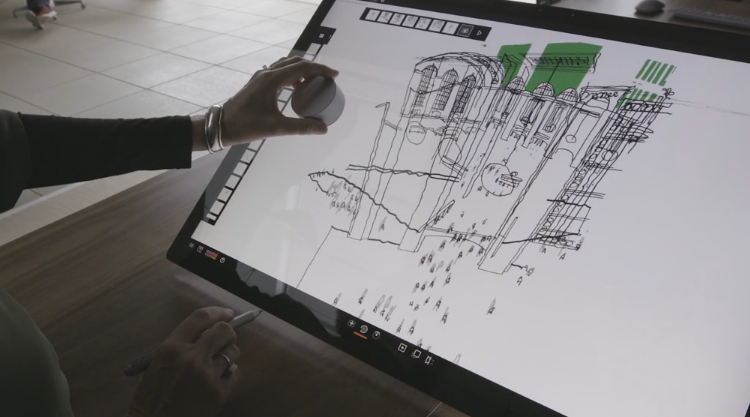 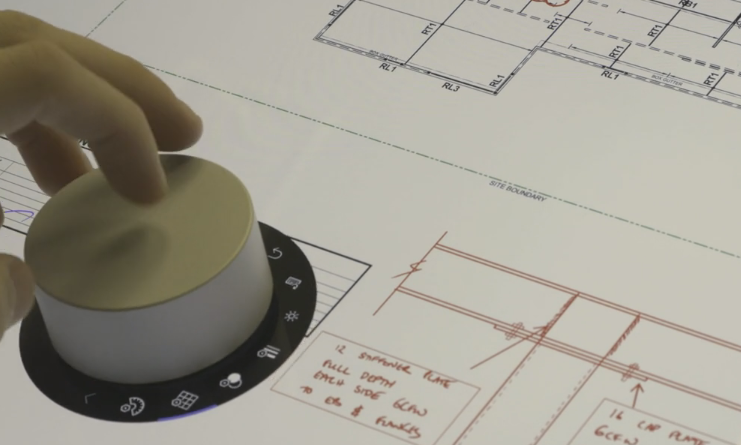 The Surface Dial may be used as a navigational device on a desktop or directly on the screen. When placed on the screen of the Surface Studio, it enables access to functionality specific to the application in use.


Examples include quick-access tool palettes, color wheels, and symbol libraries. BlueBeam and Siemens PLM Software are two of the developers that have optimized their software to take advantage of the Dial’s capabilities.

Beefing Up the Book

For those who need something more portable than the Studio, Microsoft also announced three new models of its Surface Book, which made its debut last year. These modular laptop computers comprise two component sections; the display portion can be detached from the base/keyboard for short-term use as a tablet. The new models feature: Performance Base, which is slightly heavier than its predecessor but delivers as much as 16 hours of battery life NVIDIA GeForce GTX 965M 2-GB GPU, yielding more than twice the graphics processing power of the original Surface Book solid-state drive of up to 1 TB sixth-generation Intel Core i5 and i7 processors

Panay observed that “engineers want to spin more parts in CAD, and they don’t want any lag — zero.” Microsoft claims that “engineers can spin 3D CAD models with thousands of parts” on the new Book, and “designers and developers can render large files quickly.”

Microsoft also has a software update in the works, scheduled for release early next year. The Windows 10 Creators Update emphasizes support for the creation and consumption of 3D and mixed, or augmented, reality experiences. Microsoft is partnering with Trimble to bring Sketchup to the new online community Remix3D.com, and is also adding support for 3D in Word, Excel, and PowerPoint over the next year, so that “Office features will work seamlessly with 3D models.”

Microsoft announced that hardware providers HP, Lenovo, Dell, Acer, and ASUS will ship the first virtual reality (VR) headsets capable of mixed reality through the Creators Update in 2017, and prices will start at $299.