The Modern Workstation — A Litmus Test for Today

Herrera on Hardware: What makes up a workstation today?


What's the difference between a workstation and a PC? The question comes up often among industry insiders and professional users alike and for good reason. Today, the two share much of the same core technologies — in both software and silicon — and in the particular case of entry-class workstations, it can be difficult to point at exactly what makes it different than another machine branded as a high-performance PC.

It wasn't always that way, and in fact PCs and workstations were once completely different breeds. Over time the two evolved to share many of the same genes. What we see now is a modern workstation that hasn't lost any of its appeal, but one that in its more basic configurations blurs the line separating it from its PC siblings.

Back in the 80s, and for most of the 90s as well, defining the term workstation wasn't at all controversial. From many perspectives and measures, most people familiar with the marketplace could point to a laundry list of generally accepted characteristics that separated workstations from the mass-market PCs below. Workstation pioneers such as HP, Sun, SGI, DEC, and IBM built machines from the ground up with virtually everything inside homegrown and unique to workstations. Most notably, the systems' CPU, GPU, and operating system were only found in workstations and servers and completely foreign to PCs.

Into to the mid-90's, it was ludicrous to think that a PC was a reasonable platform for handling professional applications. There were simply too many issues, for example: immature x86 processors from Intel, especially prior to the inclusion of floating-point capability; poor-reliability, single-user, non-virtual operating systems DOS and early Windows; and less capable graphics accelerators, especially prior to inclusion of 3D support. Compared to the workstation's proprietary high-performance RISC CPUs (e.g. POWER, SPARC, MIPS, PA-RISC, and Alpha), UNIX operating systems, and home-grown 3D accelerators of the time, PC-class hardware simply couldn't pass muster for mission-critical 3D visual computing.

Table 1. Technology separating workstations and PCs in 1994 were both obvious and dramatic.

Entry-level workstation blurs line. Over time, PC technology and components — driven by much higher revenue, much shorter product cycles, and many more engineer-hours in development — managed to close the gap with traditional proprietary UNIX-based workstations. By the late 1990s, the differences in capability were small enough, while the advantages in price and performance became too big to ignore. For the bulk of applications, it began to make more sense to build and use workstations based on components either taken off the shelf from the PC world or derived from PC components. In addition, applications such as AutoCAD which at that time focused on 2D designs and not targeted for workstation use per se, had been further fueling interest in exploiting more pervasive PC technology for CAD use. Combine all those factors, and the migration to a new PC-derived workstation was on.

Independent hardware vendors such as Intel, NVIDIA, and AMD began to offer CPUs and GPUs that engineering teams at companies such as Sun simply couldn't beat, or at least not anywhere near the price points. Bit by bit, vendors discontinued in-house development and transitioned to PC-derived hardware. However, the PC industry not only injected compelling hardware components for use in workstations, it also introduced daunting new competition in the form of PC vendors that could now compete as well. In the face of pressure from vendors such as Dell, the only workstation vendor to survive was HP, as one by one, DEC, SGI, Sun, and IBM all faded from the market they pioneered.

How to differentiate? With proprietary platforms now gone, the "PC-derived workstation" has simply become the "workstation," but how do you differentiate between these products? Therein lies the challenge with two boxes containing very similar hardware — one branded a workstation and the other a desktop PC.

The same is not true at the high-volume low end of the market, where workstations today at a component-level share much of the same technology and chips that drive the general PC marketplace. Under the hood of most workstations less than $2,000 are the same pieces of silicon-powered machines branded as high-performance PCs. CPUs are often the same Intel Core brand and even if the GPU is branded NVIDIA Quadro or AMD Radeon Pro, the silicon die at the heart of the graphics card is the same silicon driving sibling GeForce and Radeon consumer products. At this point, we can no longer point a finger at one or two hardware components in a box and conclude that the machine should be classified as a high-end desktop or a low-end workstation.

Is the low-end workstation a marketing scam perpetrated by OEMs looking to increase their margins at the expense of customers? No, that's a myth long dispelled, with most buyers understanding that while the make-up of the workstation has changed, its value as the premier tool for 3D visual computing is clear. However, there needs to be a different, legitimate means to cleanly differentiate the two, as the definitions or preconceptions formed in the 80s and 90s no longer apply.

To answer to the question, "What is a workstation?" I've now come down to this simple litmus test to whether a machine warrants the workstation label or not:

While there is no one specific differentiator that a workstation must have beyond a PC label, it has to have at least one differentiator and it must deliver something meaningful to buyers who demand reliable, high-performance visual computing.

Though it often is hardware-related, that "something more" doesn't have to be, but it must offer value by improving the speed, quality, or efficiency in their jobs, thereby justifying the premium cost. Examples of features and traits OEMs design into workstations to differentiate from PCs — despite an increasingly common foundation in hardware technology — include:

Higher throughput for professional-oriented visual workflows. Despite broad commonality at the silicon level, OEMs can and do shape the workstation to perform with higher performance running applications common to CAD. Xeon CPUs allow for scaling to higher core counts and sockets (two for workstations). Graphics drivers for workstations (e.g., Quadro and AMD Radeon Pro) are tuned for 3D graphics emphasized in CAD versus other applications and can perform dramatically faster than related GeForce and Radeon products that share the same core silicon. Workstations typically offer larger maximum system and graphics memory footprints than comparable PCs. Plus, workstation motherboards and chipsets usually offer higher performance input/output, for example as manifested in higher PCI Express lane counts.

More uptime and fewer maintenance issues. Maximum uptime is the ultimate goal for professionals leaning on CAD to get their jobs done, and OEMs pursue that in workstation design through several means, including superior compatibility, reliability, interoperability, integrity of data and vendor support. At the higher end, that means more tangible things such as fault-tolerant RAID storage, ECC (error correcting code) memory, as well as more robust enclosures, form factors, and power supply characteristics more conducive to reliability for high thermal and electrical demands.

ISV Certification. At any level of the market, OEMs offer ISV (independent software vendor) certification, achieved through extensive testing to ensure maximum system reliability with key professional applications. In fact, ISV certification is arguably the minimum criterion to be a workstation and it has nothing to do with the silicon doing the work. It has mostly to do with software reliability and compatibility, most notably the aforementioned graphics driver. Take a look at Autodesk's list of certified graphics hardware, and you'll only see Quadro and Radeon Pro (and a bit of Intel Iris Pro). That not only means the ISV is more confident in the reliability of its application running on those models, but perhaps even more importantly, the ISV is less likely to chase down any bugs or problems users run across while running non-certified hardware.

Quality and duration of vendor support. Most OEMs offer workstation buyers upgraded post-sales support and/or warranty service, above what is offered for PCs. To serve commercial and government applications that may have longer durations for which equipment must adhere to a specific, certified configuration during that time, OEMs typically offer longer product lifetimes to support, repair, and replace workstations than they do for PCs. 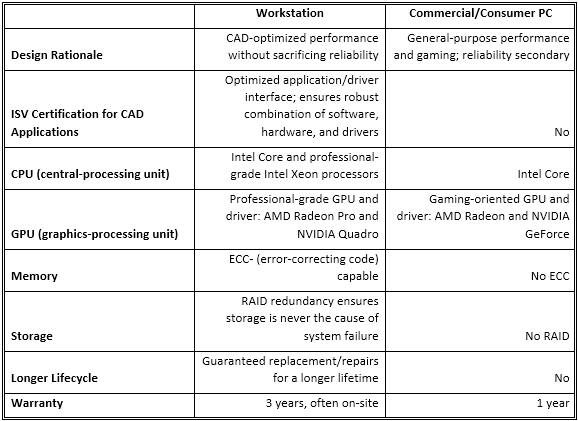 Table 2. Typical differentiators of workstations, some of which have nothing to do with hardware specifications.

Since we're on this topic, it's worth noting that HP recently released a new machine targeting visual professionals, CAD users in particular. But rather than give it the company's Z branding, HP instead created a Workstation Edition of its commercial EliteDesk line. The EliteDesk Workstation Edition is marketed as a more economical tool for CAD users. But is it a workstation? The EliteDesk Workstation Edition comes in more than one model and SKU, some ISV-certified by Autodesk and shipping with NVIDIA Quadro GPUs serving the same core audience as its Z workstation. Other models that target those who consume the products of a CAD workflow, rather than create them, come without certification and are built around NVIDIA GeForce and offer the same memory and storage components as a higher-end commercial or gaming PC.

Given that information, and based on our litmus test requiring something of value besides a label, I'm inclined to label the former models workstations, but not the latter. The former models offer professional GPUs and ISV certification and the latter models neither, and, as far as I can discern, don't offer anything more than what other EliteDesk PCs can.

The Workstation Label is Still Valuable

The workstation market today is thriving. Last year saw a record number of workstations shipped, 12.5% higher than 2017. And 2018 was no aberration, as 2016 and 2017 showed near 10% growth as well, resulting in an aggregate of 40% unit growth in the space in three years' time (all figures courtesy of Jon Peddie Research). Those are particularly bullish numbers when considered in the context of a long-term stagnant-to-contracting trend occurring in broader client PC markets during the same time period.

Importantly, the workstation platform isn't thriving based on its hardware DNA alone. Rather, it's thriving because the market continues to value its basic product proposition: to pay some degree more for a commensurate degree of better reliability, performance and/or support for users whose productivity relies on throughput and uptime. Yes, that does have to do with the foundation of hardware technology the platform draws upon, but it has just as much to do with how the platform is shaped and optimized based on that technology, as well as a wide range of benefits that have nothing to do with hardware at all.

On top of that, it's just as important to note the flip-side of the workstation's leveraging PC technology: the premium charge at that end of the market is also very slim. In exchange for what a high-end workstation model can offer, you may pay thousands of dollars more and get a machine with superior hardware in every possible respect. But at the entry level, where you may be primarily paying for ISV certification and a workstation-class GPU driver, that difference is down to hundreds or less.

Finally, factor in all the other heftier expenses of doing CAD work — software licenses, salaries, benefits, and business overhead — and CAD professionals are increasingly finding the modest premiums at the low end of the workstation market worth the incremental "something more" those products offer.