Herrera on Hardware: The differentiating metrics and decision criteria are shifting as market players and technologies change.


It’s a great question, and maybe the one asked most often when considering the optimal workstation specifications for CAD applications: “Which is the right CPU for me?” GPUs have become just as critical a consideration in visually intensive applications, but the CPU — the central processing unit that’s the heart of the machine — matters in every professional workflow. In this two-part series, I’ll describe the CPU landscape that’s most applicable to CAD workstation applications, and provide some guidance on the most appropriate options to consider, based on both budget and workloads.

But before we get started, I have one important disclaimer. These types of compare-and-contrast exercises can be valuable, but they present a dilemma: Is it better to keep the discussion at a very high level and potentially miss a few details that really make a difference in the final analysis, or to dive deep into the details but risk losing the big-picture takeaways? With this exercise, I’m going to shoot for the middle ground, hoping it’s of help when you’re navigating the increasing number of CPU options available in 2018.

Intel shapes the two product lines differently, but for now (and over the past decade), Core i7 and Xeon have dominated the workstation platform, in both mobile and deskside models. Whereas Xeon has grown to capture sockets in around 80% of deskside workstations shipped, Core currently owns about the same share in mobiles. (However, it’s worth noting that Intel’s campaign to push Xeon in mobiles is far more recent, and in fact Xeon has grown from 0% to 21% there in just the past couple of years.) 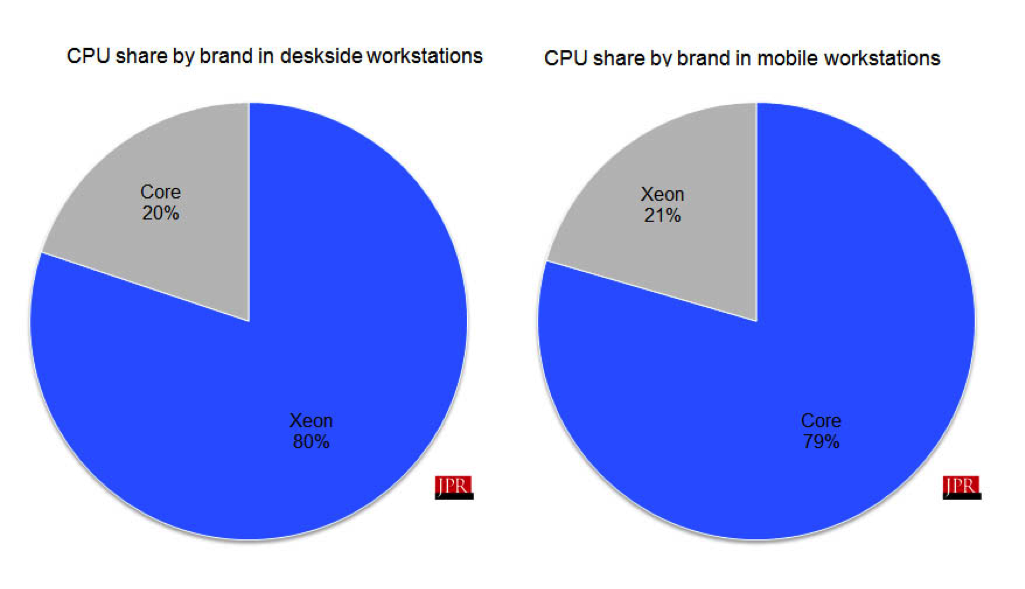 But the Xeon/Core status quo on workstation CPUs has started to change — modestly for now, but perhaps more dramatically in the coming quarters and years. This change is due to two reasons: One, the market now includes a resurgent AMD, which for the first time in nearly a decade has products that can legitimately serve workstation applications and at least disrupt the default Intel monopoly. And two, another market dynamic is subtly (at least so far) shifting the playing field in favor of one brand over the other, when it comes to the best choice for CAD duty.

The table below shows distinct differentiation across multiple key specifications. Xeon E5 was the choice for the minority of users with the heaviest performance demands in datasets, with big memory footprints and highly threaded compute-intensive workloads, especially in the context of dual-socket (two CPUs, not just one) workstation configurations. For users with more constrained workloads mostly reliant on single-threaded applications, modestly higher frequencies from Core i7 (or single-socket Xeon E3) could be an appealing choice. 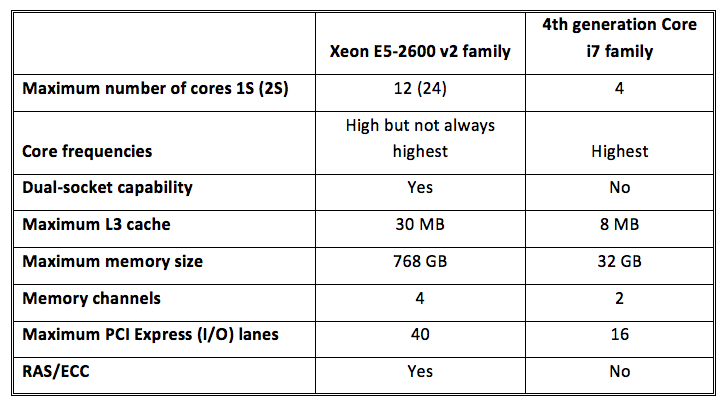 The primary metrics that differentiated Xeon E5 and Core i7, circa 2016.

For the record, Intel’s mid-performance Core i5 and i3 do play a limited role in workstations, but for the sake of this compare-and-contrast discussion, I’m leaving them out. From a practical standpoint, not only are their roles limited, but — since they are the choices of price-only customers, not feature- and performance-conscious buyers — their relative merits on those metrics aren’t particularly important.

As the table above illustrates, reliability features and dual-socket support are important points of distinction between the two product lines. Beyond these two factors, core count (along with related and commensurate supporting memory and on-chip cache) had also been a consistent differentiator between Core and Xeon brands … “had” being the operative word. In the last year, Intel has increased the core counts of its Core brand models relative to Xeon, such that — at least in the context of the dominant single-socket workstation model (one CPU chip, not two) — there is no longer a difference.

What caused Intel to change their brand offerings? In a word, or rather, in an acronym: AMD. Intel had been essentially unchallenged in the workstation market for the previous decade, but that changed in 2017 with the long-awaited release of AMD’s Zen generation processors. Zen spawned not just one, but several tiers of CPU products amenable to workstation deployment: Ryzen 7, Ryzen Pro, Threadripper, and Epyc.

First to make a meaningful mark in performance-sensitive segments, the aggressively priced Threadripper with up to 16 cores was the impetus for Intel to both create a new Core sub-brand and expand the offerings of the Xeon W brand. Topping Core i7 came the new Core i9, offering up to 18 cores to counter Threadripper. Now when Core i9 came out, you’d think a performance-conscious workstation OEM (original equipment manufacturer) would want to exploit it immediately, not only to broaden its product portfolio, but to differentiate its wares from the competition. Well, none did at first, for a few reasons: One, the workstation market is driven as much by reliability as performance, and Xeon supports reliability features that Core does not. Two, Intel also upped the core count to 18 for Xeon W, Intel’s CPU brand focusing on the single-socket deskside workstations that make up the majority of sales, especially in CAD-focused applications like manufacturing, design, architecture, and construction. As a result, OEMs could offer an 18-core option without taking on Core i9.

However, another market dynamic also emerged in the past few months that has conspired to make Core i9 a more intriguing workstation CPU candidate. One appealing enough, in fact, to prompt HP to begin offering Core i9 alongside Xeon W in its premium-level, single-socket HP Z4 series deskside workstation. (As of this writing, Dell and Lenovo have not matched HP’s decision to offer Core i9, but it would be no surprise if they both started doing so.) As covered in a previous column, Microsoft’s recent decision to mandate a higher-priced version of Windows 10 Professional for Workstations for use with Xeon processors, but not its sibling Core CPUs, has made the latter more economically attractive — both for potential buyers and for an OEM (such as HP) looking to serve those buyers. 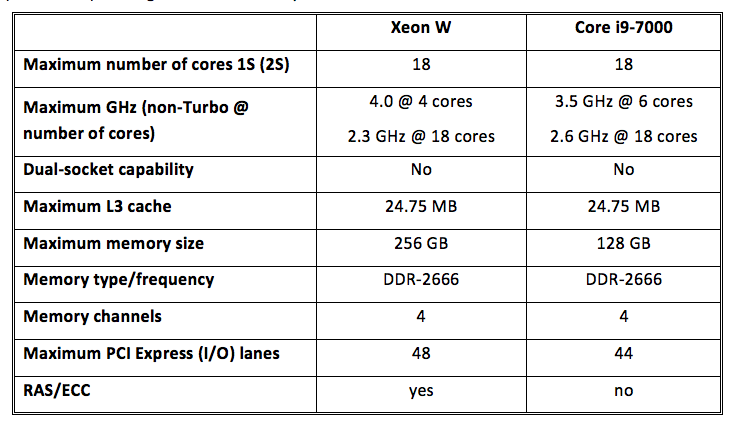 The introduction of Core i9 into the workstation mix for 2018 — instigated by AMD and Microsoft — is blurring the Xeon/Core line for the highest volume (1S) CAD workstations. Data sourced from HP Z4 datasheet and Intel.

With Core i9 in the mix now serving Premium 1S workstations, Intel’s differentiation of Core versus Xeon has blurred dramatically. With a Core i9, buyers can now configure a single-socket workstation with comparable performance to Xeon W, at a significantly lower price. And at a maximum density of 18 cores, Core i9 can actually deliver modestly higher sustained frequencies. With Core i9 now playing in Xeon W’s sandbox, the only compromise a Core buyer would need to make is to sacrifice RAS and ECC support. As explored in last month’s column, RAS and ECC can provide an additional degree of reliability when uptime and accuracy is of ultimate importance, but if the cost of choosing Xeon — paying a premium for both Xeon and the Microsoft-mandated OS — is substantial, buyers are now more likely than they previously were to stick with Core.

Editor’s note: See Part 2 of this series, which explores the emerging AMD options and discuss which CPU brands and models you should consider for your next CAD workstation.