HP has reinvented the professional workstation — again — with the announcement of the world’s first mini workstation at Autodesk University 2016 in Las Vegas tonight. First to market with the small form factor (SFF) workstation in 2010 and again with the all-in-one workstation in 2012, the computing giant has forged yet another new product category with the HP Z2 Mini, designed for users of CAD and other compute-intensive applications.

Last week in Ft. Collins, Colorado, HP hosted myself and one other journalist for an exclusive "VIP tour" behind the scenes of its workstation R&D facility and an advance unveiling of the newest member of the Z Workstations family.

Measuring a mere 8.5” x 8.5” x 2.3”, the HP Z2 Mini is ten times smaller than a traditional tower workstation and weighs in starting at 4.5 lb. It is twice as powerful as any commercial mini PC on the market today, according to HP, and can support six displays right out of the box.

Shorter than a cup of espresso, the new HP Z2 Mini Workstation is capable of designing anything from state-of-the-art electronics to home and office buildings.

Graphics and displays. Intel integrated graphics come standard; the new NVIDIA Quadro M620 2GB discrete mobile workstation GPU is an available option. Dual monitors are possible via the integrated graphics, plus an additional four via the optional GPU, for a total of six possible monitors. 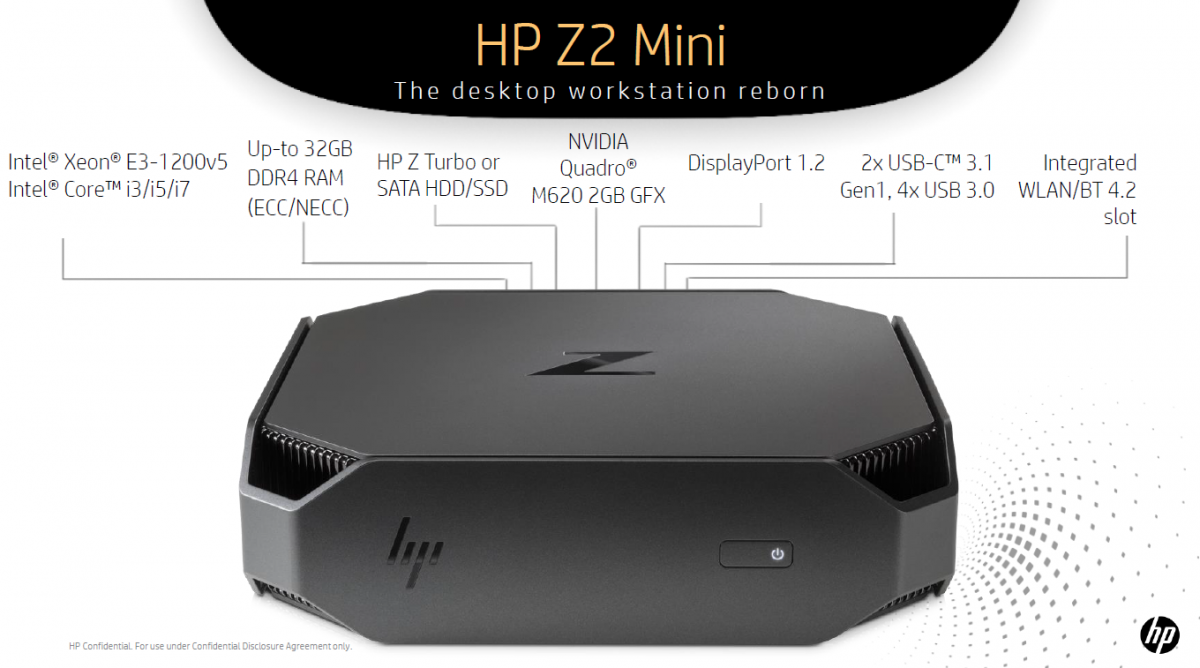 Wolf in sheep’s clothing: The new HP Z2 Mini looks unassuming but packs the power of a full-size workstation.


Ports and physical security. On the side, the Z2 Mini has two USB 3.0 ports (one charging); on the back, it has two USB 3.0 and two USB 3.1 Gen 1 Type-C ports and one audio line in. A mounting sleeve is available to attach the unit to the back of a monitor, the underside of a desktop, a wall, or other location. For locations where this portable unit might walk off, an optional Kensington Security Slot allows for physically locking the unit in place, and a steel enclosure is available that can be padlocked and can block access to USB ports if desired. 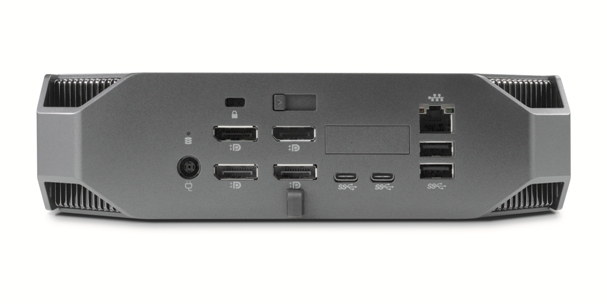 When Other Workstations Just Won’t Do
HP Z2 Mini designed for what HP sees as the workspace (and the worker) of the future and aims to covert the 42% of designers who still are not using a professional workstation, according to HP. Several trends drove development:

“We realized that we needed to reinvent what it meant to be a workstation," said Josh Peterson, director, worldwide product management, HP Z Workstations.

The new model offers more than three times the graphics performance of an HP business-class mini PC, is 63% quieter even when running at a heavy load, and has had three times the quality testing —368,000 hours total. It is ISV certified for more than 20 critical applications, including most Autodesk and Adobe software as well as SOLIDWORKS, the company reported. 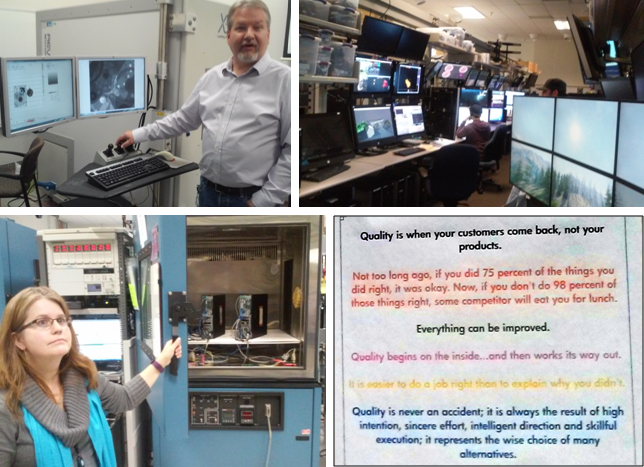 Everything that goes into an HP Z Workstation is scrutinized and pushed beyond its limits in the R&D labs in Ft. Collins, Colorado. Top left: Paul Mazurkiewicz, Distinguished Technologist, HP Z Workstations and Thin Clients R&D, demonstrates an x-ray machine used in failure analysis in the Material Science Lab. “This lets us see inside complex designs without taking them apart [and risk destroying the cause of the failure].” Mazurkiewicz’s lab also includes an electron microscope, thermal analysis tools, an infrared spectrometer, and many other high-tech devices that analyze and test the material makeup and performance of components and surfaces. “We trust but verify” the specs of plastic products provided by third parties, Mazurkiewicz said. “We want to ensure long life and good looks over time.” Top right: The 3D Graphics Test Lab looks for issues related to integration with other system hardware and software. Across the aisle, the Mass Storage and RAID Test Lab assesses memory reliability and performance. Heather Volesky, Motherboard Expert Engineer for HP Z Workstations, said, “We’ll take issues back to a vendor to resolve before we put them on the approved vendor list. We’re very demanding of our suppliers because our customers are very demanding of us.” Bottom left: Volesky demonstrates one of 28 ovens in the Hardware Test Lab that test heat, electricity, and other product tolerances and overall quality; other machinery there tests impact, shock, and vibration resistance. Bottom right: An inspirational poster in the R&D lab sums up the attitudes of those who work there.

Groundbreaking Design
The HP Z2 Mini was a design feat as much as an engineering one. The octagonal HP Z2 Mini, the company claims, is the most uniquely designed system in the company’s 35-year workstation history. Like a mobile workstation, the Z2 Mini packs a lot of powerful (and power-hungry) components into a small space, requiring high-end cooling capabilities. Fans are custom designed, and vents are designed into all four corners of the unit, each with a guard to prevent air-flow blockage should it be inadvertently pushed against or covered by something. The front panel pops off to provide access to machine components, including a fan that swings up to reveal system memory.

Lead designer Paul Drew said his team aimed for a design that conveys “luxury” — a premium look and feel — with black chrome on the vents and a surface inside the vent guards “that reflects light onto the chrome and gives it sparkle.

HP has a reputation for listening to its workstation users, and brainstorming with customers resulted in several key design moves. For example, the system features remote power-on using any keystroke or mouse click from as far away as 30 ft. It also is mountable behind a monitor to save desk space. Peterson explained, “This came out of brainstorming about what customers give up and what they gain when the unit is mounted behind the display. Customers identified this need, then HP engineers figured out how to solve for it." 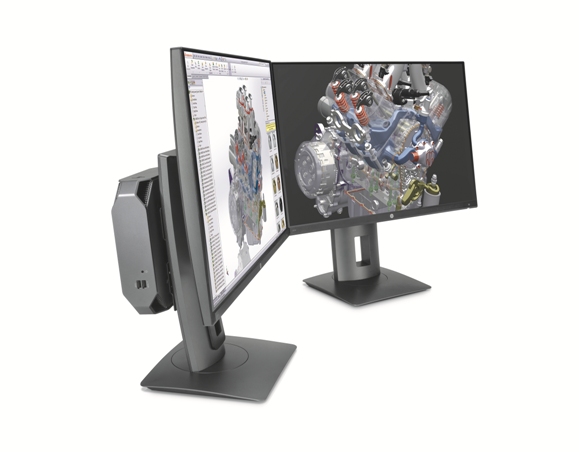 “If we had we not shared our plans with customers, we might not have identified this," Peterson added. “We also moved power button from back to front [to make it more accessible]. We wanted front to be clean but made the change in the interest of customers.”

The Z2 Mini will inevitably lure away many users of the HP Z1 all-in-one and SFF workstations; approximately 80% of SFF users could obtain a comparable configuration with the Z2 Mini. But, “We’re committed for now to supporting development of the SFF” as well as the Z1, said Jeff Wood, vice-president and general manager, Workstations and Thin Clients. “Right now the Z2 is as small as we can go,” Wood added. “To go any smaller would require the components to produce less heat. It took six years [to evolve from the original HP Z desktop workstations to the Z2 Mini] so we don’t see getting any smaller in the near future.”

Pricing and Availability
Covered by HP’s standard three-year workstation warranty, the HP Z2 Mini is expected to be available worldwide in December starting at $699. Full specs and pricing are available on the HP web site.