If you're responsible for specifying new CAD workstations or recommending configurations to your company's IT department, you should be aware of some big changes in solid-state drive (SSD) technology. One of the higher-profile announcements was made by Hewlett-Packard just two weeks ago at the National Association of Broadcasters (NAB) show, where the company introduced its Z Turbo Drive G2 model. The technology, produced by Samsung under the M.2 PCIe trade name, should start finding its way into all manner of workstations soon. 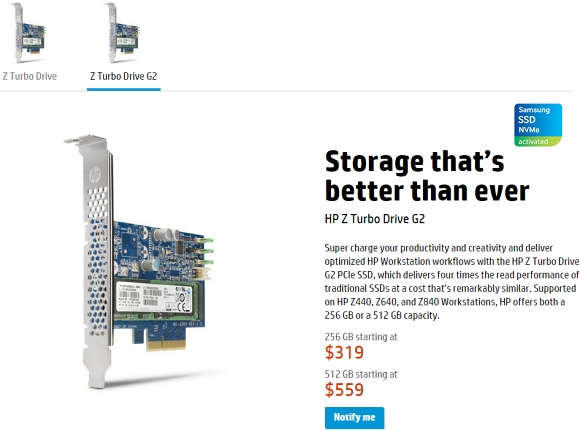 Hewlett-Packard's announcement of its Z Turbo Drive G2 is one product based on Samsung's M.2 PCIe SSD technology.

To give you some idea of the performance upgrade we're talking about with these new SSDs, we can compare to older SSD models, which simply plugged into a disk controller like a regular hard drive. Those models had typical read rates of approximately 550 Mbit/sec a big contrast with the new models, which deliver up to 2,100 Mbit/sec at 512 GB capacity. It doesn't take a math degree to see that is a 4X performance upgrade. The new drives achieve the speed by plugging into a PCIe slot on the workstation's motherboard and using four channels of I/O to move data to the processor — bypassing the disk controller entirely.

And with these drives priced at around $500, there is no reason to make your new, high-speed workstations — or high-performance mobile machines, for that matter — suffer the slowdown caused by a mechanical hard drive that would be more useful as a doorstop or boat anchor. The difference in performance is like night and day with large data sets, as the mechanical hard drive is taken out of the equation and data speeds directly to the processor.

Here are a few resources where you can learn more about the technology: