Editor's note: Through a sponsorship by Fujitsu and NVIDIA, Cadalyst brings you this feature, part of a special series of articles designed to educate CAD users and managers about the benefits of professional workstation technology.

An online survey, titled “Market Insights: Computer Hardware for the CAD Workflow,” was conducted in February to better understand the perceptions and experiences of design and engineering professionals and their companies relative to desktop and mobile CAD computing hardware.

Total survey respondents: 981. Due to rounding, percentages may not total 100%.

Conducted by Cadalyst and sponsored by workstation developer Fujitsu, the survey found that CAD workstation users, whether desktop or mobile, value day-to-day performance and reliability to an overwhelming degree. Regarding what they consider “must-have” features for a CAD computer, respondents said:

The survey also found or confirmed the following:

Who Is Using Which Type of Computer for CAD?

Computer use among survey respondents broke down as follows: 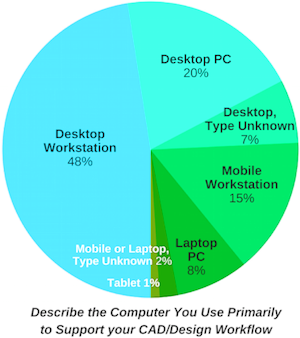 Mobile workstation users these days seem quite happy with their computer performance, according to the survey. These users (84.2% of which report using an NVIDIA GPU, the world's most advanced professional graphics solution ever created, bringing unprecedented power, performance, and capabilities to professional users) indicate that graphics performance is excellent or good (22.6% and 55.6%, respectively; 78.2% total), and 81.2% total say their mobile workstation compute performance is excellent (37.6%) or good (43.6%).

Aside from their primary CAD computing device, 56.5% of mobile workstation, laptop PC, and tablet users call on at least one additional device (such as a secondary computer, tablet, or smartphone) to support the CAD workflow. Among desktop workstation and PC users, 69.8% use at least one such device. Regarding smartphones in particular, 21.6% of all survey respondents report using one to support the CAD workflow (excluding generic tasks such as calling and emailing).

Three out of five companies typically replace CAD computers every 3–4 years, according to the survey. Desktop users are 10% more likely than mobile users to push the refresh cycle to five years or more.

Who Decides Which Computers to Purchase?

More than 80% of respondents indicated having a role in configuring new CAD computers and/or deciding which model to purchase.

Are Graphics Cards Important for CAD?

Respondents were asked to complete the sentence, “I think a professional graphics card (AKA graphics processing unit, or GPU) is ____.” Nearly four out of five respondents overall said GPUs are necessary to support graphics-intensive work (88% of mobile users and 76% desktop). Only 1.5% overall say a GPU is “not beneficial to my work,” and only 4.1% say they are using a consumer-grade graphics card.

Which technologies are companies using or planning to adopt in the next two years to support the CAD workflow? Workstation users (desktop and mobile) responded as follows: 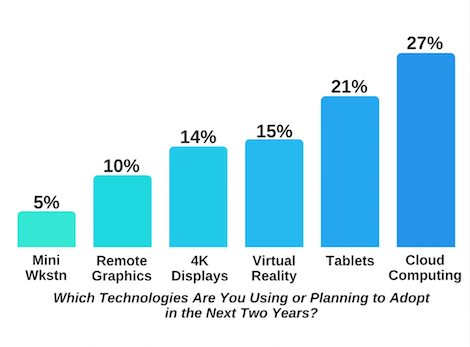