Like many of its competitors, HP sees vast potential in the entry segment of the workstation market, and is designing machines that meet budget constraints while exceeding PC capabilities.


Sometimes it seems that everything’s getting more expensive — food, housing, your increasingly outrageous cable bill. But the good news for CAD users is that entry-level workstations are now available at the lowest prices the industry has ever seen. Many workstation vendors are aggressively expanding into this segment of the market, with a particular focus on converting those users who are still running design, engineering, and scientific software applications on PCs.

“There’s tremendous growth in the entry workstation space, and that’s not by accident,” acknowledged Josh Peterson, HP’s director of worldwide product management, Workstations. “For example, if you look at the install base for AutoCAD, the vast majority are using PCs today, not workstations.”

But the company faces two hurdles in reaching those potential customers, explained Peterson: misperceptions about costs, and basic awareness. Some people have the mistaken belief that workstations are simply unaffordable; others aren’t even aware that they exist as an option, or don’t understand that they offer better performance than PCs. “Customers who are using a PC, who don’t realize there’s something better out there … that’s half of the battle for us,” he said. “Once they try a workstation, it’s really an eye-opening experience for them.”

How to Build a Bargain

At a starting price of $1,498, the Z1 G3 is not the most entry-level workstation HP produces; “a lot of our workstations start at less than $1,000,” Peterson noted. Nonetheless, it’s an example of the efforts to reduce workstation prices — and the design decisions and tradeoffs that make those reductions possible. 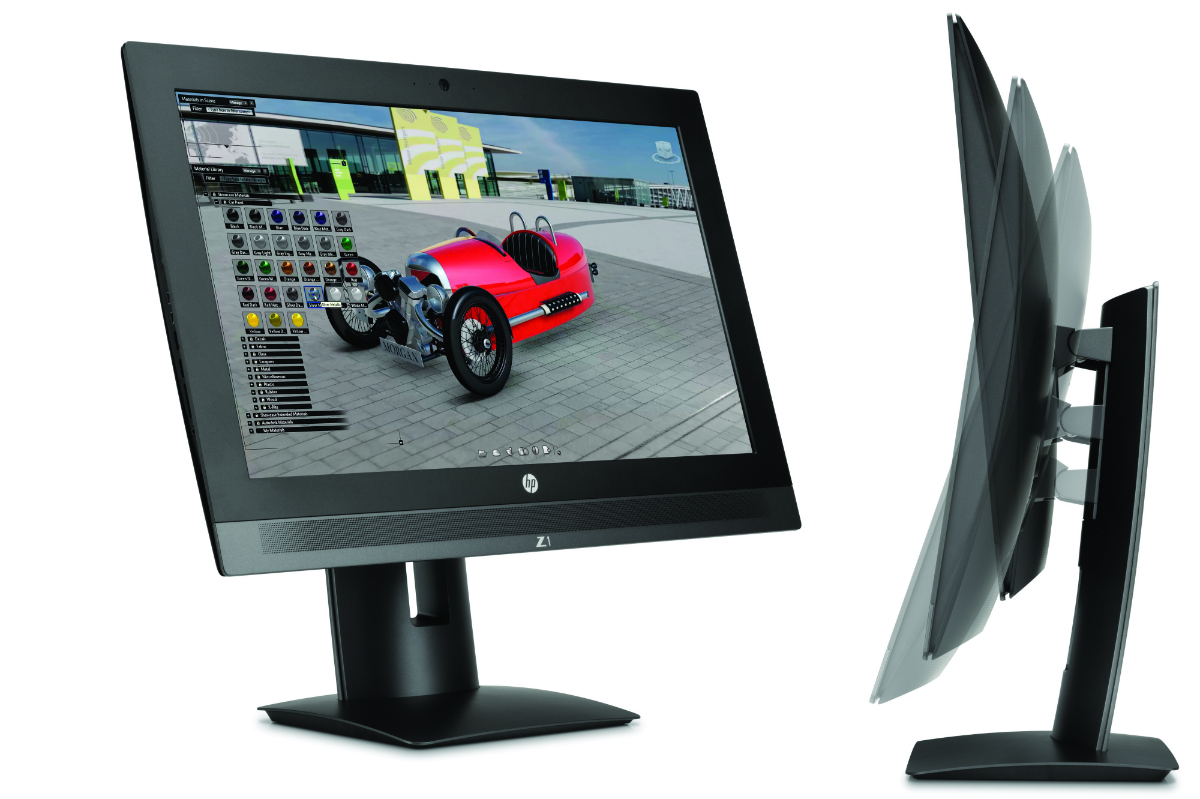 With an all-in-one configuration, the entire computer takes up only as much space as a monitor. Although the Z1 G3 is built on a new stand design incorporating fewer moving joints, it still allows users to adjust the height of the screen and their viewing angle. Image courtesy of HP.


As its name indicates, the G3 is the third-generation Z1, the latest in a line of all-in-one machines that house the monitor and all other workstation components in a single unit, in contrast to the traditional tower-plus-monitor arrangement. HP boasts that the Z1 G3, which was announced last week, is 21% less expensive than its second-generation predecessor, which hit the market a little more than two years ago.

When HP launched the Z1 family in 2012, the company wanted to make a dramatic entrance. “All-in-one workstations didn’t exist [before that], so we wanted to deliver something that was best-in-class, something big and beautiful … we really focused on making our mark,” said Peterson. With the Z1 G3, in contrast, HP saw an opportunity to develop a more affordable entry into the Z1 lineup — “we really wanted to go after the mainstream,” he continued.

Smaller screen. Part of that cost savings comes from the fact that the G3 is built around “more of a mainstream screen size,” Peterson explained. Its 24” screen makes the G3 lighter, cheaper, and more compact than its 27” predecessors, and is also in line with current trends toward multiple monitor use; “the sweet spot is two 24” screens,” said Peterson.

Simplified chassis access. The previous Z1 chassis enabled users to access interior components by lifting the screen up on hinges with gas-filled shocks, similar to a hatchback on a car. “That’s really impressive, but it’s fairly costly … so we took a totally different approach [with the G3],” Peterson noted. The G3 chassis is still fully serviceable, but users now access the interior components from the back instead of the front.

Instead of a hinged display panel that lifts up to provide access to the interior, the Z1 G3 has a removable back panel. Image courtesy of HP.


Streamlined components. Other cost — and size — savings came from using SO-DIMMs, a smaller alternative to full-size memory modules; moving away from 3.5” hard drives in favor of Z Turbo drives for storage; and incorporating a smaller power supply.

Downsizing the power supply was possible because the G3 incorporates a lower-level NVIDIA Quadro graphics processing unit (GPU) than its predecessors. “Why is this OK?” asked Peterson rhetorically. “Because you used to have to go to the 4000 series [of NVIDIA Quadro GPUs] for the performance that you can now get with the 2000 series.”

Together, these changes add up to ”better performance than the previous generation at a fraction of the cost,” said Peterson.

Some of those in the market for an entry-level workstation may interpret declining prices as a sign that they should hold off on their purchase, and wait until prices drop even further. That’s a mistake for two reasons, according to Peterson.

“Over the years, there has been more and more migration from 2D workflows to 3D workflows,” he noted. “The capabilities have gotten to the point now that the software has evolved, and the hardware requirements are bigger.

“Not everybody needs a workstation, but as the software has gotten more capable, it’s really in your best interest to make that investment.”

The second reason, said Peterson, is that the most expensive part of a company’s operations is not hardware, but people. By increasing the software users’ productivity, he explained, “you’ll pay back the investment in a new workstation very quickly.”