A new breed of custom-configured 3D workstations, including Fujitsu's CELSIUS M740 and R940, have what it takes to immerse users in a synthetic environment that suspends disbelief.

Virtual reality (VR) — which uses immersive computer-generated visuals to fool our senses into thinking we are experiencing something we're really not — has always had tremendous potential. For decades, the concept has conjured numerous compelling applications that promise to change the way we live and work. VR has struggled to live up to that potential, however — held back by challenges that had nothing to do with the concept and everything to do with the limitations of past implementations.

A compelling VR experience demands interactive visuals that can suspend viewers' disbelief, creating imagery so detailed, smooth, and responsive that they forget whether it's real or not. And therein lay the root of problems with past mass-market VR products and technology — poor image resolution, limited detail, and inferior frame rates, compounded by an unnaturally slow response, made suspension of disbelief all but impossible. That situation, however, is about to change.

Dramatic advancements in real-time interactive 3D graphics hardware, combined with a new generation of head-mounted displays (HMDs), have enabled VR solutions that finally deliver on the long-awaited promise: a convincing, immersive experience available at economical prices. And after a long wait in the wings, a whole range of applications are being unleashed that will fundamentally change the way many professionals design, develop, engineer, and market in applications from manufacturing and architecture to media, medical technology, and science.

What It Means to Be "VR Ready"

In retrospect, it shouldn't be surprising that VR technology and products needed time to mature. Delivering an immersive, true-to-life 3D graphics experience places immense demands on hardware, because it requires finely detailed scene geometry, accurate lighting, precise physics, and high resolutions — all delivered at high frame rates for smooth, realistic motion. Image-processing steps unique to VR, including image warping to compensate for lens distortion and blending to eliminate conspicuous visual discontinuities, increase the workload further. Finally, HMDs display not one but two images (left and right), requiring another doubling of the processing required. No doubt about it, quality VR demands the utmost in graphics performance.

But for VR, gauging performance doesn't end with the typical — and important — graphics metrics of image detail, resolution, and frame rates. Just as crucial to a convincing VR experience is minimizing latency, the delay between a head movement that creates a new viewpoint and the moment when the eyes begin seeing the scene from that new viewpoint. Excessive latency can decrease the realism of a VR experience, and can make it literally sickening, inducing nausea, motion sickness, and headaches in some users.

Add all that up, and it's obvious why VR is one of the most challenging real-time graphics applications to deliver. Fortunately, after many years and multiple generations of advancements, today's cutting-edge GPUs and CPUs have reached the point where VR's demanding levels of performance are within reach for developers and professional users alike.

But with such daunting requirements, how can prospective VR adopters be sure the workstations they select will be up to the challenge? Graphics technology leader NVIDIA and supporting partners such as Fujitsu have defined a set of baseline specifications that merit a "VR Ready" designation. With this program, buyers can have confidence that their machine's configuration will deliver an effective, comfortable VR experience. VR Ready compliance mandates minimum hardware requirements for system CPUs, HMDs, system memory, and — most important for such a high-demand visual application — a graphics subsystem shaped specifically to deliver the best VR experience possible. 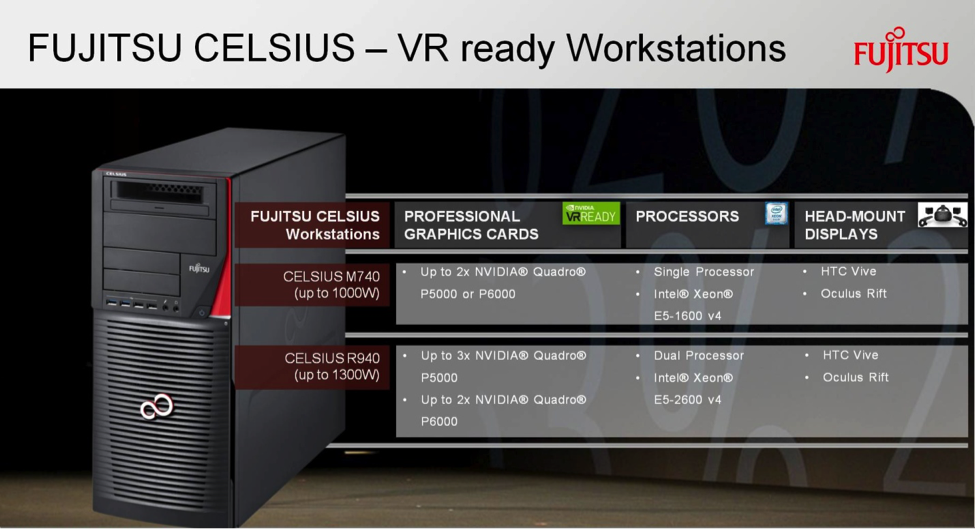 With its VR-Ready CELSIUS M740 and R940 workstation configurations, Fujitsu brings VR to life. Both models support not just one but two Quadro P5000 or P6000 GPUs, each capable of delivering a convincing, realistic VR experience. While one of these ultrahigh-end options will serve the majority of VR Ready applications well, the ultimate VR experience demands two — creating the highest performing graphics subsystem available, one that is perfectly suited to the needs of VR.

Why is it ideal? First, the best-quality VR experience today is based not on traditional scanline rasterization but on physically based, ray-traced rendering — a technique that can efficiently harness the power of multiple GPUs. Nvidia's GPU-accelerated Iray physically based renderer is already supported across a wide range of professional-caliber applications, including SOLIDWORKS Visualize, Siemens NX, Autodesk 3ds Max and Maya, Maxon Cinema 4D, McNeel Rhino, and others. Second, VR relies on stereoscopic viewing, where each eye is presented with a different, slightly offset image. That paradigm maps perfectly to NVIDIA's supporting multi-GPU SLI technology, which can dedicate one GPU to the left eye and a second to the right, efficiently maximizing VR rendering throughput. 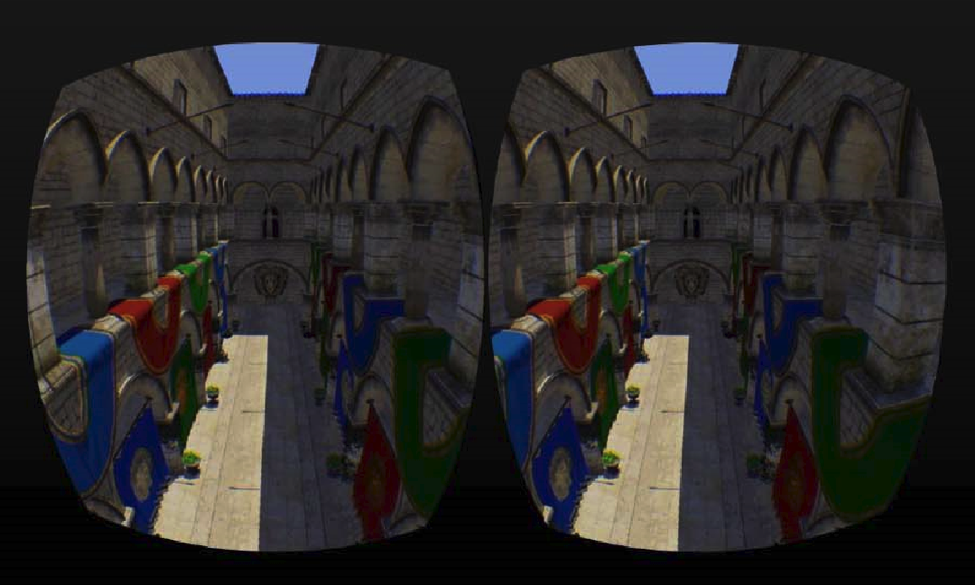 VR technology may have suffered in the past from the lack of a convincing viewer experience, but it never suffered from a lack of compelling uses for such an experience. The computing landscape — and in particular, the professional computing landscape — is rife with applications that can benefit from VR. Perhaps the most obvious is media and entertainment, where game developers can leverage VR-Ready CELSIUS workstations to create and optimize VR experiences for gamers. But looking beyond gaming, professional computing industries across the board are seeing valuable uses for VR, particularly in simulation and ergonomic design.

Architects and clients can navigate spaces yet to be built, honing the details of rooms and floors, intimately experiencing how interior lighting changes from sunup to sundown, and even testing arrangements of furniture before it's ordered. Consider the design of a new airplane or automobile cockpit, or the layout of an operating room: There's no better way to ensure controls and access are optimal than by putting the pilot, driver, or surgeon in the virtual environment before anything is built. VR can also be an effective means for pilots and surgeons to train and practice in the virtual world before carrying those skills over to the physical one. For applications such as automotive, VR's value isn't limited to engineers and stylists; it carries over to buyers looking to "test drive" a car that's still in pre-production, or to configure an interior to their particular desires.

With VR, nurses and surgeons can evaluate designs to help create an ergonomically optimal operating room. Image courtesy of NVIDIA.

While compelling applications for VR have long been envisioned, they were never matched by the ability of cost-effective machines to deliver a compelling VR experience — until now. Thanks to today's products and enabling technologies, VR is poised to finally deliver on its long-awaited promise.

Leveraging VR Ready–compliant components and a growing ecosystem of supporting software, a new breed of custom-configured 3D workstations can do what generations of predecessors could not: immerse users in a synthetic environment that suspends disbelief, without nausea or headaches. Fujitsu's VR-Ready CELSIUS M740 and R940 are two such workstations — designed, engineered, and manufactured in Germany to provide professionals the ultimate VR platforms.

To learn more about CELSIUS, check out Fujitsu CELSIUS online. To find out more about product availability in your area, please visit the Fujitsu Reseller Locator website or contact Fujitsu directly via phone (1-800-831-3183) or e-mail.