Herrera on Hardware: In the CAD workstation market, Intel is the undisputed processor provider — but an opportunity may be opening for AMD to re-enter the arena.


Of the major hardware components that make up a CAD workstation — central processing unit (CPU), graphics processing unit (GPU), memory, and storage — all but one are addressed by multiple suppliers. GPUs, memory modules, and storage devices all bear the brands of a variety of top-tier suppliers, including Nvidia, AMD (formerly ATI), Samsung, Seagate, Micron Technology, and Toshiba. The CPU is the exception, because for all intents and purposes, Intel owns the market for workstations serving CAD applications.

Literally all workstations shipping to CAD markets from the three largest suppliers — Dell, HP, and Lenovo — feature Intel Core or Xeon brand CPUs. Even better for Intel bean counters, the company now ships more premium Xeon brand CPUs to workstation applications than it does the Core brand. That means it not only delivers more performance and reliability features for workstations, it also undoubtedly earns Intel more lucrative margins in workstations versus PCs, which rely more heavily on the less-expensive Core brand. 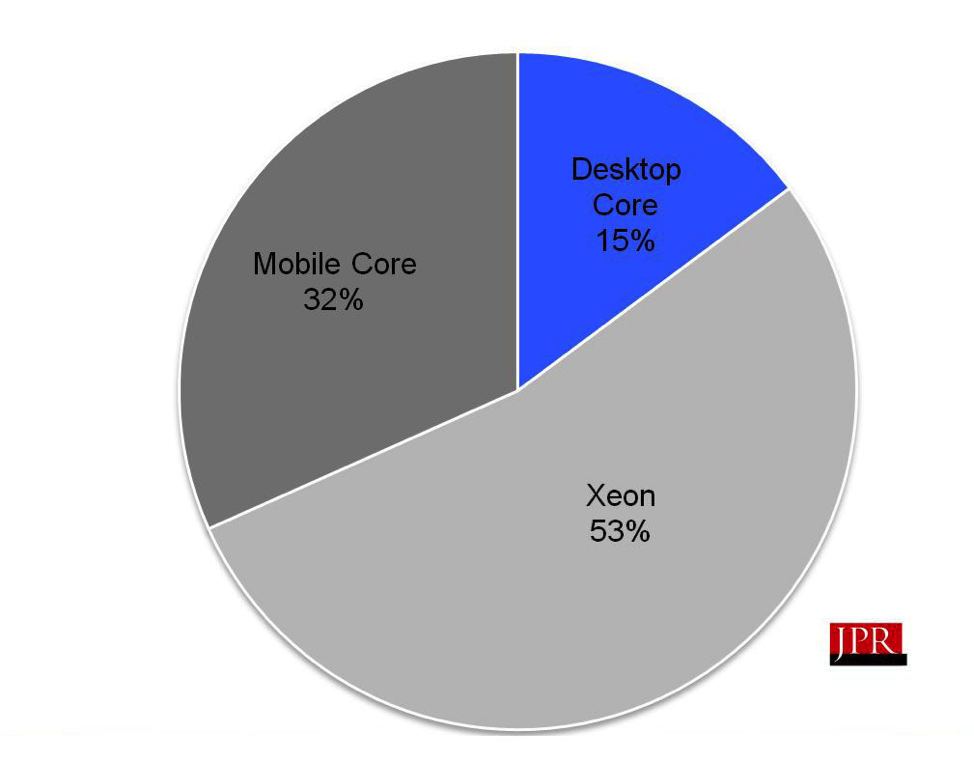 When Intel released its most recent family of processors last quarter, code-named Skylake, one interesting bit of information was revealed that most press and market analysts missed. For years, Intel had been shipping CPU-integrated graphics (branded HD Graphics P-series) in mobile and deskside workstations, but for some reason it had always reserved its highest-performing Iris Pro brand graphics for more mainstream commercial and corporate applications. Now, for the first time, Intel was not only shipping its CPU-integrated GPU in Xeon brand products, but it was planning to ship its highest-performing GPU in select Xeon parts targeting key applications including CAD.

Now, if that sounds counterintuitive to you, you're not alone. Intel has seen incredible success with its integrated GPUs in mainstream markets; they’re now out-shipping the discrete GPUs from Nvidia and AMD. So why would the company choose to hold back its highest-performing GPU in one of the very applications — CAD workstations — that could benefit the most? The answer isn't clear, but it's possible the company didn't want to push its graphics technology into spaces where it may not yet be up to snuff. Workstations have until now been virtually 100% reliant on discrete GPUs, such as Nvidia Quadro and AMD FirePro. And while Intel would probably like some of that market, it knows that worse than missing out on that business would be charging into it too quickly and failing.

That may have made sense. Compared with vendors Nvidia and AMD, Intel's graphics hardware had long trailed in performance, reliability, and reputation, and for good reason. Building GPUs is anything but easy (some might argue it’s harder than CPUs), and it took a while for Intel to build up that competence. Over its past several microarchitecture generations, however, the company has made big strides in driving up its GPU performance and capability. It's not good enough to challenge AMD and Nvidia in mid-range and high-end graphics, but it can certainly go after the lower end of the market, in applications such as 2D and "light" 3D CAD. And now, poised to release its top-end Iris Pro Graphics P580 in some Xeon parts launching this quarter, Intel has its best weapon yet to pursue such users.

Add all that up, and it would appear Intel is as well positioned as ever to maintain its dominance moving forward. And where in all this is the other premier supplier of x86-compatible CPUs, AMD? Today, the number two processor vendor is essentially absent from the marketplace, with no major original equipment manufacturer (OEM) shipping workstations based on its CPUs (though many ship machines outfitted with the company's FirePro GPUs). Ten years ago, however, the story was looking very different, as AMD mounted a serious threat to Intel in one of the rare times the chip leader was vulnerable.

At that time, AMD was drooling over the server market, specifically hoping to cash in on the perfect storm it had created with its CPU, code-named Hammer. The right part delivered at the right time, Hammer was an x86 implementation that combined the best of conventional 32-bit x86 with 64-bit address extensions along with a highly scalable multisocket scheme that significantly outperformed Intel's offerings at the time.

Hammer-based Opteron (AMD's version of Intel's Xeon brand) took off in workstations, especially high-end CAD, seeing penetration rise from nothing to around 4% of the market. The future looked bright, but AMD then stumbled in execution (with follow-on generations that slipped schedules and missed performance expectations), while Intel at the same time righted its own ship. And the end of 2011 left Opteron without any major OEM, slipping back to virtually no market share.


AMD Should Be Eyeing the CAD Workstation Market

Ever since Opteron faded, Intel has had no rivals left to challenge its workstation CPU market dominance. In the coming year, however, we could potentially see AMD again an active competitor for CPUs to serve CAD applications. I see four good reasons for the opportunity, and for the company to attack it:

Long-term, there's actually a fifth, and perhaps most compelling offering that AMD has at its disposal to serve CAD computing markets: the accelerated processing unit (APU), which combines the CPU and GPU on one chip. Leveraging its FirePro GPUs, AMD's APU can put it in an enviable (and unfortunately, unfamiliar) position of having something neither of its chief rivals has. Think about it: Nvidia GPUs dominate the space, yes, but what Nvidia cannot do is integrate its Quadro with an x86 CPU to target workstations (even if they wanted to — which they probably don't — they don't have the x86 license).

Intel, on the other hand, has the dominant CPUs, but its GPU doesn't have the pedigree of FirePro in the space. An APU based on Zen and FirePro could represent the best combination of CPU and GPU on a single chip of silicon, creating a formidable arrow in AMD's quiver to attack two of the highest-volume chunks of the workstation market: entry deskside and mobile machines.

With archrival Intel's back turned, and with its most appealing combination of performance-oriented technologies and products in some time, AMD may have its best opportunity yet to challenge as a provider of CPUs to CAD workstations. That doesn't mean AMD will threaten Intel's domination of the market soon, if ever. Rather, we'd likely be looking at AMD taking a minority share, as it did a decade ago, representing more of a nuisance to Intel than a real danger. Still, even a nuisance will mean more competition than Intel's seen in the CAD workstation space for many years. And since competition invariably leads to lower prices and superior products, that alone would be welcome news for workstation OEMs and CAD users alike.