Editor's note: This article was originally published in the Fall 2010 issue of Cadalyst magazine.

It's been a few years since Cadalyst reviewed a workstation from @Xi Computer, so when a new Xi MTower PCIe arrived, I was excited by the opportunity to put it through its paces. As it turned out, this moderately priced desktop workstation set a new performance record in Cadalyst Labs.

The MTower PCIe system I received was based on an Intel Core i7-950 3.0-GHz quad-core processor that was mounted on an Asus P6X58D Premium Intel X58 motherboard that supported both SLI and CrossFireX graphics accelerators. The motherboard had three PCIe 2.0 slots and included two USB 3.0 connectors as well as eight standard USB 2.0 sockets.

The system supported triple-channel DDR3 1600/2000-MHz RAM with 6,144 MB of 1,333-MHz triple rank interleave memory with heat spread, which is available only on Core i7–based motherboards. When fully populated, the motherboard can accommodate 24 GB of 1,333-MHz RAM. Although numerous hard disk options are available, the system I tested included a Seagate Momentus 500-GB 7,200-rpm XT hybrid SATA II drive with 4 GB of SSD memory cache. Due to the nature of these drives, the second and subsequent iterations of a given benchmark test will produce slightly higher scores, which I used for the test results reported below. 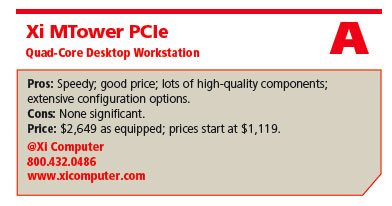 Microsoft Windows 7 Professional 64-bit was preinstalled on the system, and both a Windows 7 DVD and a DVD that included the various drivers used by the system were packaged among the cables and accessories. A PDF user manual for the Xi MTower PCIe also was included, as was a quick-start guide.

When testing the Xi MTower PCIe system, I ran two benchmarks: the Cadalyst C2011 v5.3b and the SPEC ViewPerf 11. The Cadalyst benchmark was running under AutoCAD 2011 x64 with the most currently available service packs and patches applied. I performed all tests at a screen resolution of 1,280 x 1,024 at a color depth of 24 bits. I ran several iterations of the Cadalyst benchmark in two different configurations, first with the default Autodesk drivers, then with several iterations of the same test using the NVIDIA performance drivers for AutoCAD. All benchmarks were run with vertical sync set to the Force Off position, as I typically do during all testing. 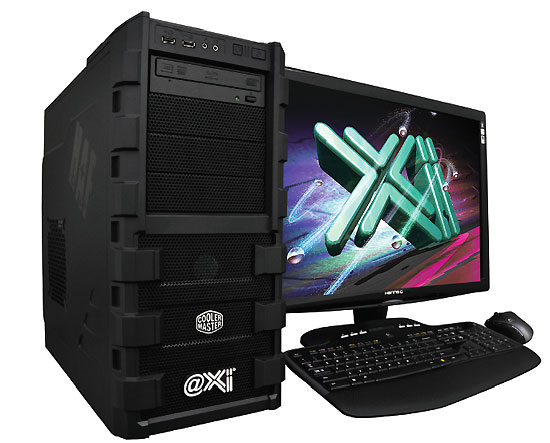 
The second test suite I used was the SPEC ViewPerf 11 benchmark, which is the latest release of this industry-standard benchmark for evaluating OpenGL graphics performance. For those familiar with the older SPEC ViewPerf 10 test, the results from that revision of SPEC ViewPerf aren't directly comparable to the results from ViewPerf 11. The tests of the latter version are more complex and access different features, making a comparison between the two sets invalid.

As expected, test results were greatly improved with the NVIDIA performance drivers for AutoCAD 2011 compared with the native drivers. I ran a series of tests using this driver, which produced a C2011 total index score of 1,220, a 3D graphics index of 4,156, a 2D graphics index of 315, a disk index of 186, and a CPU index of 224. The system completed this benchmark in a speedy 13 minutes. This particular test result is the fastest performance I've seen to date in Cadalyst Labs.

The Xi MTower PCIe has a base price of $1,119, but as equipped was $2,649. This price includes a three-year hard-ware warranty with express advance parts replacement, parts and labor, and return shipping costs. A range of system con-figuration options are available, as are other warranty plans.

Much skill is required to put together a great workstation, and @Xi Computer demonstrates this well. With its high-quality components, expandability, speedy performance, and moderate price, the Xi MTower PCIe easily earns a high mark. Highly Recommended.