For more than 20 years, @Xi Computer has been designing workstations for CAD users, and during that time the company has developed a reputation for delivering real value. The latest Xi MTower PCIe workstation reviewed in Cadalyst Labs holds true to that tradition.

Large and unusual-looking tower cases are popular among desktop workstations of late, and this Xi MTower PCIe workstation is a prime example. The all-black CM Storm Trooper Quiet High Ventilation tower measures 9.5" x 23.75" x 22.5" (WxHxD) — the largest we've seen in Cadalyst Labs — and is visually striking, with a motif suggestive of Star Wars. As its name implies, it is quiet, despite the fact that it is cooled by three dedicated fans, including one monster fan (7.5" diameter) on top. All six sides of the tower feature metal mesh for ventilation. A sturdy, integrated handle lets you get a firm grip on this 44-lb unit.

At the heart of the Xi MTower PCIe sits an Intel i5 2500K quad-core processor (3.3 GHz; 6-MB L3 cache) overclocked to 4.5 GHz. A Corsair silent, sealed water-cooling system, which includes its own fan and mini-radiator, keeps the CPU cool. In keeping with its large case, the Xi MTower PCIe includes a Corsair TX850 Ultra-Quiet power supply (minimum 80% efficiency). The whopping 850 watts of power it provides should handle virtually any add-ons you might require.

The graphics subsystem of the Xi MTower PCIe is powered by an NVIDIA Quadro 4000 graphics card (2 GB of GDDR5 RAM) and includes one dual-link DVI-I port and two DisplayPort connections, as well as a 3D stereo (3-pin mini-DIN) jack. With this configuration, you can run two simultaneous displays at a maximum resolution of 2,560 x 1,600 with 32-bit color. 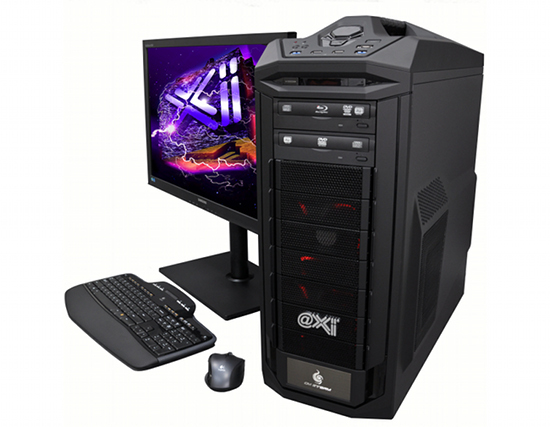 Don't worry about running out of external connections with the Xi MTower PCIe. Located high on the front face of the tower — allowing for easy access — are five USB 2.0 ports, two USB 3.0 ports, two eSATA ports, assorted memory card slots, a 5V DC power plug, and microphone and headphone jacks, plus the power and reset buttons. Located at the rear of the tower are six USB 2.0 ports, two USB 3.0 ports, one eSATA port, one Gigabit Ethernet port, one optical S/PDIF audio-out connector, a Bluetooth v2.1 module, and a set of 7.1 HD audio jacks.

Based on our extensive experience with @Xi Computer, we weren't surprised that the benchmark numbers for its latest workstation were incredible. Running c2011 with AutoCAD 2011 and the NVIDIA enhanced driver, the scores were as follows: total index of 1,482, 3D graphics index of 4,864, 2D graphics index of 439, disk index of 274, and CPU index of 352. These scores are the highest we've seen to date for a workstation in Cadalyst Labs.

While we're on the subject of performance, let's address the topic of overclocking the CPU. The Xi MTower PCIe's water-based cooling system is designed to maintain an acceptable temperature for the CPU and other components on the motherboard. In the lab, we did a stress test by running our c2012 benchmark continuously for five days (800 iterations). This literally works the CPU, memory, and graphics card continuously at full throttle. The Xi MTower PCIe performed flawlessly throughout the test. Of course, there is no way to be certain how the overclocking will affect the CPU in the long run.

The Xi MTower PCIe carries a base price of $1,119. As configured for this review, the price is $2,994 ($3,105.45 with ground shipping). This price includes a three-year hardware warranty including parts and labor, express advance parts replacement, and return shipping costs. The first three years of technical support is free, and @Xi Computer includes a 30-day, money-back guarantee (excluding software).

The Xi MTower PCIe has everything you need to get serious work done today and ample expansion capacity to support whatever needs may arise tomorrow. Thanks to its competitive pricing and superb performance, the Xi MTower PCIe offers exceptional value. Highly Recommended.