Why Did You Hire Me?

How clearly a manager communicates a worker’s responsibilities can affect everything from morale to company success.


Editor's Note: This article was originally published in the Winter 2012 issue of Cadalyst magazine.

Why did you hire me? It might seem like a silly question — or even a joke. But this query is a serious one that must be answered if workers and their employers want to be successful. It's a question that seems to be increasingly common among CAD managers, whose bosses often don't understand the CAD management role, the technical issues that come with it, or why any of it is important. It's possibly even more common among drafters, who struggle with management's everincreasing tendency to devalue their contributions. Whenever this question arises in a workplace, it's a signal that communication has broken down and worker anxiety and low morale could be setting in — all of which eventually lead to poor productivity and attrition. 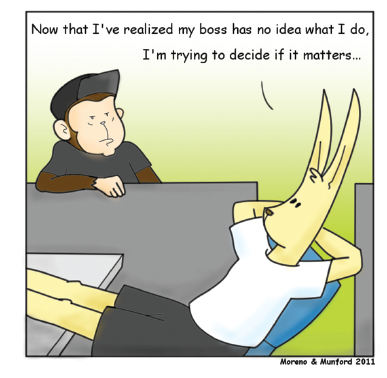 But none of this has to happen. In fact, it's a relatively easy situation to avoid.

"Why did you hire me?" arises from the very foundations on which we build our working relationships. After all, in each organization every person has a role. From the CEO to the designer all the way to the drafter, if any one of us does not fulfill our responsibilities, how can the organization succeed? So it only makes sense that everyone involved must have a clear understanding of his or her role.

That might seem obvious, but how many of us have held a job where we were not sure what was expected of us?

Poorly defined occupational responsibilities are very common, and usually completely unintentional. The problem begins with that time-tattered concept of the job title and its equally outdated friends, the organization chart and pay scale. One day a manager sees there is an opening in the org chart for a drafter. So the manager advertises, collects resumes, and hires a drafter whose skills most closely match those laid out long ago in the job description, and offers a salary that falls within a predefined range. Then the drafter goes to work — and the surprises begin.

Go move those boxes, the boss tells the new drafter. Work on this marketing brochure and make the graphics pop. Take a photo of that engineer so we can include it in this proposal.

The drafter's confusion is answered with the inevitable manager-speak explanation that we are all part of the team. Well, yes, you are a drafter, but right now we are getting ready for the holiday so I need you to be a graphic designer and work up a great banner for the party. Oh, and you'll also need to pick up the party snacks. Once you're done with that, you'll have to stay late to finish these edits. Remember: Teamwork!

Unfortunately, this pep talk does very little to reconcile the discrepancy between the job you thought you were hired to do and the job you are doing.

Don't get me wrong — I am not advocating a prima donna attitude. In fact, I prefer to work where we all do our part regardless of title. There have been many times that I have packed boxes, fixed computers, answered phones, or whatever else was needed at that moment. I am a drafter who is happy to step outside that role because I have always known that this is part of my job description.

The concept of a team player is not just management rhetoric; it is very much an apt description of workers in today's business world. Business, like any game, has winners and losers — as well as rules and expectations. These guidelines tell each player which part of the field to cover. Companies, like sports teams, must establish and communicate these guidelines to their players, or employees.

Just as no coach would send nine players onto a baseball field directionless, no manager should send an employee to perform a job without instruction up front. Communicating clear goals, responsibilities, and feedback are the keys to any organization operating at top efficiency with maximum retention of its talent. Managers must not take it for granted that a designer or drafter should automatically know what his or her job entails. Instead, they should take the time to discuss expectations. The ultimate goal of a team is success, whether it be a mark in the Win column or signing a big contract. If even one member is unclear about the game plan, the entire team will suffer.

By the way, none of this precludes anyone from going above and beyond. In fact, making job duties clear to employees is a key part of encouraging outstanding performance.

One or the Other

Modern-day managers who still operate within the rigid boundaries of titles and organization charts should, by all means, hire secretaries, drafters, and any other cogs required to keep the machine moving. These managers should not, however, expect those workers to step beyond their job descriptions. If an employee excels, he or she should be rewarded with a new title and corresponding pay.

Managers who want to build a team, on the other hand, should hire team players and let them know that versatility and flexibility are expected and that the best and perhaps only way the organization can win is for everyone to give 100%. Effective team players should be recognized and rewarded proportionately for the part they play in the organization's success. If any aspect of this process is overlooked, managers can expect confusion and dissatisfaction to result, and should expect to watch those employees leave one by one.

Which type of manager do you have? Are you filling a spot on the org chart or playing on a winning team? If your job satisfaction and productivity are suffering because you're unclear about your role in your organization, maybe it's time you asked your boss, "Why did you hire me?"